FRED DE SAM LAZARO, guest anchor: For much of modern times, it seems, artists have parked their spirituality outside the studio, outside the gallery. Our next story takes us to a retreat in Santa Fe, New Mexico, intended to bring back what one organizer calls "the intimate relationship between art and faith."

Judy Valente has our report. 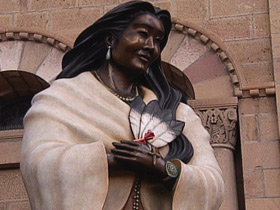 JUDY VALENTE: Santa Fé: a city whose spiritual heritage dates back to the Native Americans and Spanish missionaries; a place of stunning natural beauty -- home to more than 250 artists' galleries; a city where the spiritual and artistic come together easily. Each summer, hundreds of artists from across the country journey here to St. John's College, in the foothills of the Sangre de Cristo Mountains, for what's called the Glen Workshop -- a weeklong gathering sponsored by the literary journal "Image."

KAREN HESSEL (Calligrapher): I was looking over some different verses that are meaningful to me.

JULIA HENNING (Sculptor): I think mosaic-making is a good metaphor for putting together bits and pieces. It's a metaphor for how we do that in life

UNIDENTIFIED POET (reading): The non-physical saintliness of a real person in whom God was. 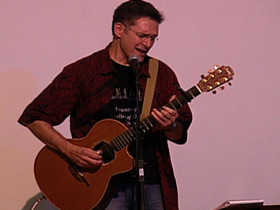 UNIDENTIFIED SONGWRITER (performing): This is my Father's world...

VALENTE: Men and women who say their art is also a spiritual pursuit.

RACHEL MORRIS (Calligrapher): This is actually the Word of God written in six different scripts.

GINGER GEYER (Mosaics Instructor, Glen Workshop): There's just a lot of parallels between the creative process and spiritual development. You know, it's that mysterious thing where you are inspired and you don't know where it comes from. And you can't totally credit yourself even if your skills are way up there. And so the process of making something is very much like leading the spiritual life where you don't know what's coming next. It's kind of just a big fat leap of faith.

VALENTE: Most of these artists don't create traditional religious pieces, like statues or crucifixes, but say they see themselves as modern-day bearers of a long tradition linking faith and art. 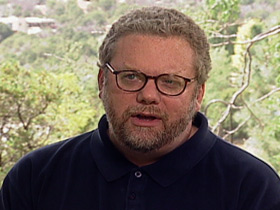 GREG WOLFE (Coordinator, Glen Workshop): The relationship between art and faith has always been intimate except for this brief interlude in the modern era when people thought that religion was a kind of wish fulfillment or escapism and therefore couldn't create great art. So we are trying to bring those two things back together again.

VALENTE: Though most of the attendees are Christian, this year's gathering, for the first time, brought together artists and scholars from the Muslim and Jewish faiths as well.

The goal of this workshop is to show how the beauty of art can open a pathway to deeper understanding between people of different faiths.

Mr. WOLFE: Each of the three religious traditions is deeply rooted in a vision of beauty and a sense of God as an artist, as a creator and as a maker. And I think one of the great, one of the most powerful things about beauty is that it opens us up, whereas sometimes discussion about morality or doctrine can clamp us down.

RODGER KAMENETZ (Writer): I'm a big fan of Rumi. I love Rumi. And, he inspires me. So I just go wherever something inspires me.

Mr. KAMENETZ: Of course. And I hope Rumi loves me. 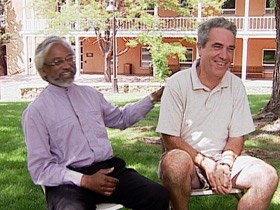 Mr. WOLFE: Art is something that religious people sometimes have a nervousness about. It doesn't always seem to maybe tow the strict doctrinal line. So for them to come to a place where others are working in faith in making things is a great reassurance to them.

TIM BOTTS (Calligraphy Instructor, talking to Workshop participants): So our quote that we're wrestling here with is by Leo Tolstoy: "Every work of art results in one who receives it entering in to communion with the one who produced the art." And one of the reasons why I chose that quote is because of the word "communion," because one of the things that is so special about this kind of time is that we as visual artists so oftentimes work isolated.

VALENTE: Likewise, many spiritual artists say, the broader artistic community often treats them as outsiders, simply because of their faith.

Ms. MORRIS: To talk about yourself as a visual artist and a spiritual person, it's sort of taboo in many settings and in the art world in particular. Artists don't like to talk about their own personal or spiritual journey. So for me, it is who I am. And this environment allows me to talk about it more openly. 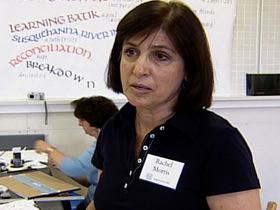 (explaining her work): I'm going to lay over several layers of colors -- very faint, then darker -- with the Hebrew, Arabic and English script underneath.

UNIDENTIFIED ARTIST: Here is the companion fairy, OK. All right? Well, and so I'm single-handedly raising the taste level of kitsch.

Mr. WOLFE: Frankly, a lot of religious art has been kitschy and hasn't really delved into the nitty gritty of human life and so there's been a lot of skepticism about whether religion really encourages people to delve into the deep truths of the human heart.

VALENTE: Delving into the human heart takes many forms at the Glen Workshop. Shirley Cunningham, a fashion designer from Texas, uses a dressmaker's model to express her spiritual truth.

SHIRLEY CUNNINGHAM (Artist): The spirituality of taking, of accepting the female body as it is, rather than trying to make it into something it isn't. Using the artistic elements of texture and line and color and the feminine body as a canvas to say, "This is what God gave us." And that is as much a spiritual experience as doing crosses and painting Jesus, you know.

VALENTE: Nowhere was the intersection between faith and art more concretely on display than in the mosaic workshop.

Ms. HENNING: The fact that you can take little broken up stuff, very tiny little pieces of it, and come up with something that's quite lovely and beautiful. You're always thinking about where's my next one going to fit and doing a lot of cutting and making them tinier if they need to be.

VALENTE: On their final day together, the mosaic artists reflect on some of what they've learned.

UNIDENTIFIED WORKSHOP PARTICIPANT #1: Well there was a wonderful piece in last night's homily and he quoted from the Qu'ran: "When you care what others think that becomes your prison, so pick your jailers carefully.

UNIDENTIFIED WORKSHOP PARTICIPANT #2: And I think as artists the greatest calling is to practice resurrection.

UNIDENTIFIED WORKSHOP PARTICIPANT #3: A lot of times I don't know what that piece is about until it's done. And I see art as being very incarnational. 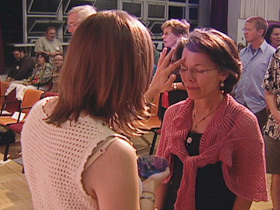 VALENTE: On the final evening, there are prayers in three languages. The artists each come forward and are anointed on the forehead with a circle, then a farewell blessing.

Mr. DARDESS: Peace to you all, peace to you all as you leave this wonderful week. Peace and joy to you as you follow the path of beauty that leads without doubt to the one God.

Mr. WOLFE: In each of these three traditions is based on a sense of awe and wonder at the world. And frankly at a time when many people look at the arts and they see only irony and cynicism, I think these three traditions can come together and share their passion for the beauty of the created order and renew our culture.

VALENTE: Wolfe says the interfaith theme of this year's event drew a record number of artists. He is considering repeating it next year and inviting artists from even more faith traditions to take part.

Artists have started to practice their spirituality outside the studio, outside the gallery. In Santa Fe, New Mexico, individuals attend a retreat that is intended to bring back what one organizer calls “the intimate relationship between art and faith.”