BOB ABERNETHY, anchor: Now, a special look at art in the Muslim world. It’s always had limits because the Qur’an’s rejection of all forms of idolatry has been interpreted as a ban on any representation of a living being — no animals, no humans. So Islamic artists have specialized in beautiful writing, intricate designs, and rich materials and colors. You can see that at the National Gallery of Art in Washington, which is showing a collection from the Victoria and Albert Museum in London. The senior curator there is Tim Stanley. 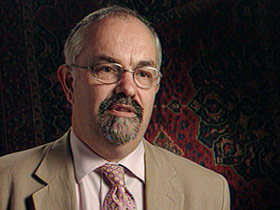 TIM STANLEY (Senior Curator for the Middle East, Victoria and Albert Museum, London): Islam, as a religion, actually has very little to do with the material world. Islam itself does not prescribe how art should be, apart from very broad rules such as that you shouldn’t use human or animal images in a religious context.

The religious objects that we’ve got in the exhibition include, for example, a minbar.

A minbar is the pulpit that was used by the preacher in the main mosque of the city to deliver the sermon at the noonday prayer on a Friday. It’s decorated with very grand patterns and with calligraphy.

We’ve actually got some of the scientific instruments that were used by Muslims in order to establish both the time of the daily prayers but also the direction of the Ka’aba in Mecca so that they could say their prayers in the right direction.

The Middle East is the focus of piety for Muslims. The ceramics workshops began to produce large tiles which were decorated with a sort of diagram of the holy places in Mecca. And above this diagram, there’s actually a quotation from the Qur’an that makes the statement that Muslims should go on the hajj if they have the resources to do so. 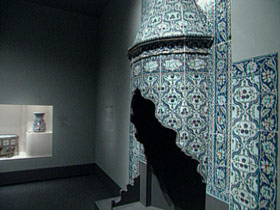 Muslims are buried so that when they rise again on the last day, they will be facing the Ka’aba in Mecca. And in the exhibition, for example, we have three tiles that make up a large tomb marker that covered a distant descendant of the Prophet Muhammad.

The Qur’an is the thing which God sent into the world which created Islam and, therefore, it is very highly valued in Islam, very highly esteemed. The very highly trained calligraphers would be writing in special scripts that were particularly decorative and beautiful … on papyrus and parchment, using reed pens.

There aren’t enormous numbers of religious symbols in Islam and, of course, there’s no religious iconography that’s used in mosques. In Islam, everyone was responsible for worshipping in places that were in order, that weren’t offensive in any way to God.