BOB ABERNETHY, anchor: There is an exhibit at Washington National Cathedral that celebrates what can happen when people of different religions live together in peace. It displays treasures from the Middle Ages in Spain, before the Spanish Inquisition, when Spanish Jews, called Sephardim, lived peacefully alongside Christians and Muslims in a time of vast artistic and scientific achievement.

Washington National Cathedral’s exhibit is a joint venture with the Spanish government and the B’nai B’rith Klutznick Museum. We spoke with the Museum’s Diana Altman and Reverend Canon Peter Grandell of the Cathedral. 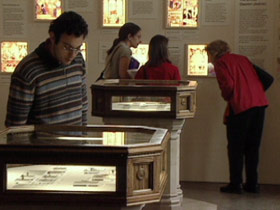 The Reverend Canon PETER GRANDELL (Precentor, Washington National Cathedral): We viewed it as really part of the Cathedral’s mission to uphold, particularly in these difficult times, a point in history where, without idealizing it, we could say Christians, Muslims, and Jews lived together as human family. And out of that came a brilliant period in history of art, culture, science, medicine. And it had its dark side too, and we also want to acknowledge that … the history of the Inquisition, the forced conversions. You see the testimonials.

My favorite piece in the exhibit right now is the technological wonders, the virtual synagogue, and the 360-degree tours that are taking place. The manuscripts are fabulous, but to actually enter into that full experience of what worship life would have been like, to me, is a real marvel.

DIANA COHEN ALTMAN (Director B’nai B’rith Klutznick Museum): Jews have lived all over the world but what’s clear is this was more than a kind of a way station and a place to long for Jerusalem and wait for the day to move on. I mean, this was their home. They practiced Judaism freely in all its ritual aspects and its daily aspects. It was an opportunity to practice the ancient traditions and, you know, to really, really practice what they believed.

Rev. GRANDELL: When people come together, great things can happen. And I think what the exhibition is trying to say is that, at this moment in history, individual faith groups came together at a point in time and more happened than could have happened had they been isolated.