BOB ABERNETHY, anchor: For the millions of American stockholders, among them many faith groups, there is conventional investing—trying to get the highest return on your money—and there is so-called socially responsible investing—trying to do well and also do good. Once, religious and other concerned investors divested from companies that engaged in certain practices such as doing business in apartheid South Africa. Now, more and more, and with strong leadership from faith groups, the emphasis is on persuasion. Billions of dollars are involved, and the pressure does not seem to hurt the bottom line. Betty Rollin reports.

MERCY INVESTMENT GROUP (praying): Fill us with love and devotion. Holy wisdom, guide us in the choices we must make.

BETTY ROLLIN: Choices like what to do with $400 million. This is a board meeting of the Mercy Investment Program, which manages investments, chiefly pensions, of the Sisters of Mercy. They are an international community of nuns who focus on issues of poverty, women, and children. 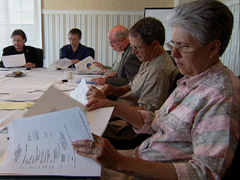 MARY GRADY DUDEN (Mercy Investment Program): Religion is a lived life. It’s not just about going to church on Sunday or Saturday. It’s how do you take what you believe and use it for the greater good.

ROLLIN: For this group the greater good is getting companies to be socially responsible.

Father MICHAEL CROSBY (Mercy Investment Program): When you own equities or common stock in companies, generally speaking it gives you ownership, and as an owner you have a voice.

ROLLIN: But is doing good bad for business?

Fr. CROSBY: There is no loss by doing good, by doing the kind of things that we do. We have as good of returns as those who are not using socially responsible screens.

ROLLIN: The Mercy investors’ voice is one of 275 mostly religious groups, all members of the Interfaith Center on Corporate Responsibility, known as the ICCR. Their investments total $110 billion.

Tim Smith, a Methodist minister, was a founder of ICCR and led the group for many years.

TIM SMITH (Walden Asset Management): You see more and more companies being willing to take stands on corporate social responsible issues—to say we’re going to be a leader on climate change; we’re going to be committed to a strong position on diversity; we are going to make sure that our products are not made in sweatshops overseas as much as we possibly can.

ROLLIN: Journalist Marc Gunther has written extensively on this issue.

MARC GUNTHER (Journalist, Fortune Magazine): I think in the beginning there was moralizing and preaching and, understandably, passion over issues like apartheid and the Vietnam War. There is still passion, but now it is grounded in much more of an economic argument and therefore more likely to be effective.

ROLLIN: A priority issue both for religious communities and the Coca-Cola Company has been the HIV/AIDS epidemic in Africa.

MARC PREISINGER (Shareholders Affairs Manager, Coca-Cola Company): HIV/AIDS is not a social issue for us. We’re the second largest private sector employer on the continent of Africa, and so we find ourselves in some cases having to hire two, three different people for the same position because of the amount of sickness involved. So it’s a business issue.

ROLLIN: The Coca-Cola Company has provided enormous help for people with HIV/AIDS. ICCR urged them to report on their efforts. 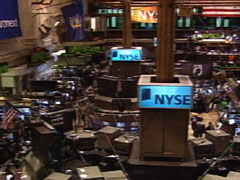 Mr. PREISINGER: We had no intention of reporting and in fact didn’t think it was a good idea at the time. But they convinced us that in fact it was. And we not only got quite a good if you will publicity rub out of it, we believe we were helpful to other companies who were struggling with what to do on that issue on the continent.

Sister VALERIE HEINONEN, OSU (Corporate Social Responsibility Consultant): Most often the first conversation is polite, but we may not necessarily have anyone at the table who believes that it’s necessary for them to go any further than to listen to us.

ROLLIN: How do you get them to move?

ROLLIN: And if that doesn’t work, the next step is the filing of shareholder resolutions which go to all the investors and are voted on at the annual shareholders meeting.

Sister VALERIE: Even if the shareholder doesn’t read the proxy, doesn’t learn that way, the shareholder resolution is presented at the annual shareholder meeting. Most of the companies hold their meetings in large cities which means—

Sister VALERIE: Press, and this is a very interesting issue for press.

ROLLIN: This year alone, ICCR has filed a total of 327 resolutions targeting 218 companies—the most ever. Topping the list: environmental issues, especially global warming. Next: corporate governance with an emphasis on high executive pay. Human rights and worker rights were also issue of concern.

ROLLIN: Whereas ICCR’s strategy is to win companies over to their ideas, some religious funds, such as the Catholic Ave Maria Fund, simply avoid companies that are involved in abortion services, pornography, or provide employee benefits for unmarried couples. But mainly religious investors try to sway companies to their point of view and often succeed.

Mr. GUNTHER: We now have McDonald’s worried about the obesity crises. We have Coke worrying about what happens to their bottles after they’re thrown away. We have Nike worrying about worker conditions in China and Indonesia. Those are all changes that have happened in the last decade or so, and religious investors have played a part in that.

ROLLIN: The other part is being played out in the secular world.

Mr. SMITH: It’s no longer just the faith community making a moral case. It’s major investors in this country saying that these issues of governance, environmental and social responsibility are key for companies’ success.

Mr. GUNTHER: Social investors went to Michael Dell four or five years ago and said, “What are you doing about computers after people don’t want them anymore? They are ending up in dumps. They have toxic materials. They are going to China and being disassembled under unhealthy conditions.” He essentially said, “I never thought about that,” but then began a process of addressing the issue, and now Dell is taking back all of its computers at no charge.

ROLLIN: Of course, not every company goes along with every request.

ROLLIN: Even the nuns haven’t made a dent?

Mr. GUNTHER: Even the nuns have not shamed the CEOs around the issue of executive pay.

ROLLIN: There is other potentially bad news for socially responsible investors. Currently, any shareholder with $2,000 worth of stock can file a shareholder’s resolution. But the SEC is considering a proposal that would require a shareholder to own at least five percent of a stock in order to file a resolution. This would severely limit the number of resolutions that could be filed. The ICCR has already begun to fight.

FAITH AND FORTUNE: HOW COMPASSIONATE CAPITALISM IS TRANSFORMING AMERICAN BUSINESS by Marc Gunther THE MARKET FOR VIRTUE by David Vogel