BOB ABERNETHY, anchor: We have a Christmas story today about the rebuilding of D'Iberville, Mississippi on Biloxi Bay after Hurricane Katrina two-and-a-half years ago destroyed 475 homes and damaged many more. Governments didn't seem to be helping much, so two local college professors stepped up as organizers. Since then, in all, from all over the country, 6,500 volunteer builders have come in to help, and more than 750 families have a place to live again.

GROUP (singing): I will go, Lord, if you lead me. I will hold your people in my heart…

RITA SAUCIER (D'Iberville Resident): They come down to help us from all over the country, and it's just like God sent them here saying, "These people need help and I want you all to help them." And I really feel like he had a hand in getting us all the help we need. 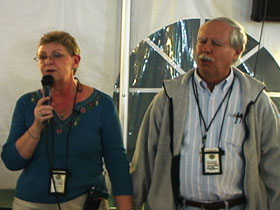 ABERNETHY: D'Iberville had 8,000 people before Katrina. After the storm, 2,000 people fled, but among those who stayed were two local college professors, Irene McIntosh and Ed Cake, who simply took over the rebuilding effort.

Dr. IRENE MCINTOSH (President Director, D'Iberville Volunteers Foundation): We might have 25 volunteers one week and we might have 150 volunteers the next week.

ABERNETHY: Ed and Irene defined with academic precision every task that had to be done.

Dr. MCINTOSH: We need to have their jobs ready. We need to prepare food for them. We need to make sure that our tents are straight and they can get into them. So there's just a constant work that you do. It's overwhelming, I mean, it's dwarfing, and you come in and work very hard for a week and don't really see anything finished.

(Speaking to Group): There will be others coming behind you just as you came behind some other people. So the work won't stop. The work will continue. What we do is one wall at a time, one stud at a time, one piece of insulation at a time.

Dr. MCINTOSH: We can't make them whole. What we can do is give them back something, a smaller house, a smaller place, some stability, and that's really what they're asking for.

MARY FRECHE (D'Iberville Resident): I won't be living in a trailer for the rest of my life! It certainly was looking that way and thank God for these people that have given of their times and their homes and their families to come and aid people like us.

ABERNETHY: The volunteers are skilled and unskilled men and women from many denominations and religions. 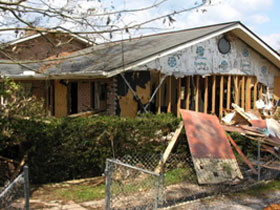 BILL TIBLIER (D'Iberville Resident): Mormons, Methodists, Lutherans, Catholic, 90 percent of what I've had in my home here have been Presbyterian.

Dr. ED CAKE (President Director, D'Iberville Volunteers Foundation): Their determination to help and their loving support -- those were the things that gave you the will to continue.

ABERNETHY: The D'Iberville volunteers say giving what they have is fundamentally satisfying.

MARK WHITE (D'Iberville Volunteer): Just us showing up gives them hope that things will be all right, eventually.

Ms. FRECHE: I'm just so thankful. There's not enough words to express -- it really is not.

ABERNETHY: The beneficiaries have learned to be good receivers.

Dr. MCINTOSH: There's a grace to receiving that I think is more difficult than the grace of giving, and in that grace of receiving -- and our citizens know how to do it better than most people -- they love to reach out, they hug, they say thank you a million times.

LYNDA THRASH (D'Iberville Resident): The minute that I saw the first volunteers, I said this is my angels. They're disguised as strangers, but they're certainly angels.

UNIDENTIFIED VOLUNTEER: We spent a week and the drywall around the whole house basically got done.

Ms. THRASH: They were up the ladders, in closets. They were awesome.

ABERNETHY: Volunteers contribute not only sweat but money too for lumber, paint, equipment, and anything else required. 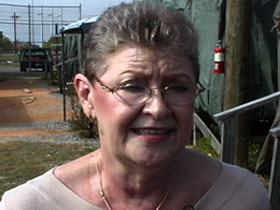 Dr. MCINTOSH: We've had over 6500 volunteers come and they've come on average three times each, and each one of those volunteers is unique, and they come full of love.

Dr. CAKE: Part of the push during this season of the year was to get as many folks who were still in FEMA trailers into their homes now, and a few more before Christmas. That's been a joy for us and a joy for them. 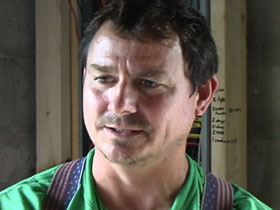 Mr. WHITE: It makes me feel good. You know, it's nice when people tell you you're an angel.

GROUP (singing): I will hold your people in my heart.

ABERNETHY: Every Friday, Ed and Irene say goodbye to the volunteers who are going home.

Dr. MCINTOSH: Travel in peace, travel in safety, travel in God's grace. We love you, bless you, thank you.

ABERNETHY: The D'Iberville story proves, once again, that great as it is to want to help others it's even greater to know how.

Two and a half years after Hurricane Katrina destroyed 475 homes and damaged many more in D’Iberville, Mississippi, people are rebuilding. From all over the country, 6,500 volunteer builders have come in to help, and displaced families have a place to call home again.