LUCKY SEVERSON, correspondent: At the Liberty Baptist Church in Waynesboro, Mississippi, Phillip Gandy has been pastor for 24 years.  He says God and his congregation wanted him to run for the State Senate because …

SENATOR PHILLIP GANDY: There are some real encroachments on religious freedom in America. Since, say, the sixties we began to see a feeling by people of faith, primarily Christians, that there is a, maybe a hostility that has developed over the years toward Christianity.

SEVERSON: So Mississippi State Senator Gandy, with strong support from his congregation, sponsored and pushed through a law called the Religious Freedom Restoration Act, also known as RFRA. It’s similar in purpose to a controversial bill that was rejected by Arizona’s governor. 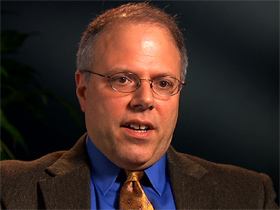 David Masci is senior researcher at the Pew Center’s Project on Religion and Public Life.

SEVERSON: Senator Gandy says the kind of protection he envisions for instance would be when zoning regulations prevent the church from building in a particular neighborhood. But critics argue it is a protection that simply is not needed.  A solution in search of a problem.

GANDY: The law was designed to protect people of faith from having their religious freedoms violated.

SEVERSON: The senator offered a hypothetical... 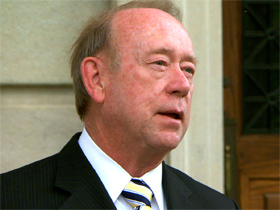 GANDY: Let’s just suppose that a law was passed that said that you had to drive to Jackson, Mississippi, to get your license, and the only day that you could get your driver’s license would be on Sunday. That would be a law that would unnecessarily burden people of faith.

SEVERSON: Senator Gandy says the subject of same-sex marriage never entered the debate. He says church leaders from around the country supported the bill. But there were quite a number who did not.

JIM WINKLER (President and General Secretary, National Council of Churches): I wonder if it's not a low-level form of hysteria that’s sweeping sections of the country.

SEVERSON: Jim Winkler heads the National Council of Churches, comprising about a hundred-thousand local churches with about 40 million members, although not all agree on same-sex marriage or on other issues.

WINKLER: I guess I kind of view it as a rearguard action by those who are concerned by changes taking place in society, by the growing number of laws that protect LGBT people, those who have same-sex marriages.

GANDY: I don’t think that this is reactionary toward any particular thing that’s happening in society. I think it’s just a desire that people of faith have so that we would be able to practice our faith without the 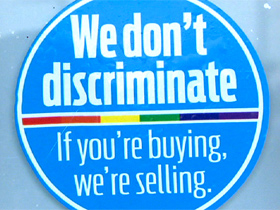 government imposing upon us burdens that would limit that. Unnecessary burdens.

SEVERSON: The state's Chamber of Commerce supported Senate Bill 2681, but at least 150 Jackson businesses decidedly don’t. They have signed up to display a window sticker that says “If You’re Buying, We’re Selling.” In other words, we don’t care what your lifestyle is. Hair salon owner Eddie Outlaw is one the business leaders behind “If You’re Buying, We’re Selling.”

EDDIE OUTLAW: Was sort of a way to let the rest of the nation know that there are progressives here that are opposed to what’s happening, that we fought against it, we did some damage, but we didn’t stop it.

SEVERSON: Mississippi’s constitution bans same-sex marriage, so many argue that a state RFRA wasn’t needed in the first place. Jennifer Riley Collins with the ACLU says there was no outcry for a new law, except from some of the legislators themselves. 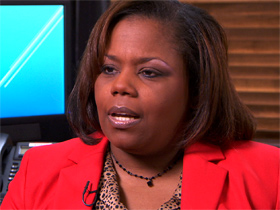 COLLINS: All I kept hearing was they wanted to promote Christian values. And I will tell you that that is where we are concerned as the ACLU, because not one, no one religion should be promoted ahead of other religions. Everyone has the right to believe or not to believe.

SEVERSON: In 1993, President Clinton signed into law a federal Religious Freedom Restoration Act. A few years later, the Supreme Court said that law only applied to federal statutes, and several states quickly passed their own laws. It's such laws that were the basis for the proposed legislation the Arizona governor recently vetoed, and the one Senator Gandy introduced.

COLLINS: The original legislation that was proposed was terrible. It basically was a license to discriminate, just flat out. I will tell you, through the public outcry and people coming together and standing together, the legislation went through several amendments. But unfortunately through some political maneuvering it was kept alive.

MASCI: There’s still very great support for it, at least from what we see of elected officials in the Republican Party. And, not surprisingly, most of the states that have passed RFRA laws are in the Midwest and in the South, places that tend to be more socially conservative. 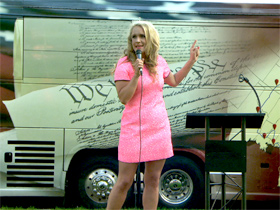 SEVERSON: The issue here, which may be as big or even bigger than same-sex marriage is the fear of encroaching government, underscored by a Tea Party bus caravan that showed up at the capital while we were there.

(to Senator Gandy): Is it aimed at government?

GANDY: It’s aiming at keeping government in its place.

SEVERSON: There’s a mistrust of government?

GANDY: I think so.

WINKLER: I don’t have a doubt that in some congregations, maybe many congregations, that ideology gets promoted. It’s interesting to me just as, not only as a Christian but as a citizen, how strongly this anti-government attitude has grown up over the years.

SEVERSON: The ACLU’s Jennifer Riley Collins also worries about government encroachment but from the legislative branch.

COLLINS: I’m also a Christian. I pray to God, I read the Bible on a daily basis. I, however, do not think that my religion should trump anybody else’s religion. And no government should ever be able to promote one religion above another.

SEVERSON: Senator and Pastor Gandy remains proud of his legislation. He sees it as a legitimate practice of his faith.

GANDY: There is an environment in America that want to allow people of faith to practice their faith within their church houses, but not carry that faith into their real life. Well, you can’t do that if you’re a Christian. As a Christian, my faith identifies who I am, and it identifies what I do.

SEVERSON: Mississippi’s new law kicks in the first of July.

For Religion & Ethics NewsWeekly this is Lucky Severson in Jackson, Mississippi.

Baptist pastor and Mississippi state senator Phillip Gandy recently sponsored and the legislature passed a religious freedom restoration act “to protect people of faith from having their religious freedoms violated,” says Gandy. But others see it as an attempt to legalize discrimination under the pretext of religion, or to insulate the state’s Christian residents from the changes in LGBT civil rights occurring across the country. “It’s aiming at keeping government in its place,” Gandy explains. But National Council of Churches president and general secretary Jim Winkler describes it as “a rearguard action by those concerned by changes taking place in society.”