BOB ABERNETHY, anchor: The beliefs and practices relating to Jewish prayer shawls called tallit. The elaborately braided fringes, the tzitzit, on the four corners of the shawls, represent God's 613 commandments to the Jews. We discovered a synagogue with a class in which boys and girls preparing for their coming of age ceremonies, bar mitzvahs and bat mitzvahs, make their own tallit. Our guide is Rabbi Greg Harris of Congregation Beth-el in Bethesda, Maryland.

Rabbi GREG HARRIS (Congregation Beth El, Bethesda, Maryland): The tallit is a ritual garment. It is a prayer shawl that is composed of a large piece of cloth that has fringes on the edges. The tradition of wearing fringes dates all the way back to the time of the Torah, the time of the Hebrew Bible. In the Book of Numbers, in Chapter 15, we are given the commandment, one of the 613 commandments in the Torah, that tells us to wear tzitzit, to wear fringes on our garments. When we recite the verses from the Book of Numbers, we recite it during a prayer called the Sh'ma. The Sh'ma is a central prayer within Judaism, and we literally gather our tzitzit together, and each time we say those words, we give it a kiss. 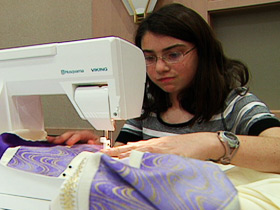 Rabbi HARRIS: A kiss is something that you give to someone that you love. It's not the cloth that we are showing affection for, but it is what they represent -- the 613 commandments. To be able to select the colors, select the material can be personally meaningful and, I think, a very powerful way to access a tradition that is as ancient as Judaism. It's the best example of hands-on Judaism. It is not uncommon for a couple that's going to get married to build their wedding canopy, the chuppah, to include a grandfather's tallit because he can't be there himself.

An atarah is the neckpiece, the top piece of the tallit, and anything can go on there. Sometimes, if you go to a synagogue you will see that it has the blessings itself written on. We say "L'hittatef ba'tzitzit" -- to wrap yourself in the tzitzit. But anyone can choose a verse that's meaningful. The 613 commandments are all represented by the tzitzit.

AMANDA FORD (Congregation Beth El, Bethesda, Maryland, speaking to class): These are kosher tzitzit. They're made out of pure wool, out of a twisted string, and there's enough in here to do all four corners.

Rabbi HARRIS: We know that in Hebrew, every letter has a number. Aleph is one and bet is two. If we add up the numerology of the word tzitzit, it adds up to 600, and that combined, the word tzitzit for 600, five knots, four strings that are folded over to make eight is 613, which are the commandments.

The prayer we say when putting on the tallit ends, "L'hittatef ba'tzitzit" -- to wrap yourself in the tzitzit. I always tell the bar mitzvah boys and the bat miztvah girls that when we say L'hittatef ba'tzitzit that we are wrapping ourselves in everything that it means to be Jewish: Jewish law -- halachah -- and Jewish customs, Jewish music, Jewish food, Jewish books. And we are being embraced by thousands of years of tradition. It is a highly spiritual, powerful moment.

Jewish prayer shawls are called tallit. The elaborately braided fringes, the tzitzit, on the four corners of the shawls, represent God’s 613 commandments to the Jews. We discovered a synagogue with a class in which boys and girls preparing for their coming of age ceremonies, bar mitzvahs and bat mitzvahs, make their own tallit.