TIM O’BRIEN, guest anchor: If you think it’s been a hard winter in the U.S, consider the weather in Bangladesh. People there are barely recovering from a devastating cyclone, a not unusual tragedy in that part of the world, and this time global warming threatens to flood much of the country. As the land begins to disappear, climate refugees, as they are called, are learning to farm differently and to live and go to school afloat. Fred de Sam Lazaro tells the story.

FRED DE SAM LAZARO: It was the strongest cyclone ever recorded in a place that’s seen many of them. Two months later, the modest homes seem in hopeless disrepair. The human suffering is on fullest display at distribution centers like this one run by the charity Islamic Relief. On this day, 700 families were given basic care packages. Many more went home empty-handed. Saidur Rahman was among the luckier ones, though he’d hardly call himself lucky. His house was badly damaged, but his large extended family did get emergency food aid and was able to move back, with the painful exception of their 27-year-old son.

SAIDUR RAHMAN (through translator): He went out to fish. When the cyclone came he was trying to park his boat, but another boat collided with him. He fell in his boat. He was injured, and he died. 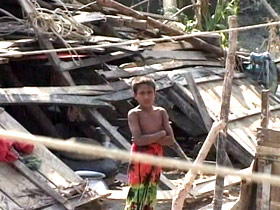 DE SAM LAZARO: He and about 3,200 others died in November’s cyclone. It’s a figure that relief officials feel good about. A cyclone here in 1991 killed 140,000, but this time there were early warnings and schools became shelters.

DE SAM LAZARO: So these are 30,000 people who could potentially have perished were it not for the preparedness?

DE SAM LAZARO: Non-government organizations, especially faith-based ones, have been key to relief efforts in a country known for ineffective governance. The Christian organization World Vision has been helping people put their homes together temporarily with corrugated iron sheets. It will take years to build sturdier homes. Restoring livelihoods seems even more distant.

UNIDENTIFIED FARMER #1 (through translator): It’s not just the cyclone. We are facing a disaster every day with water problems. 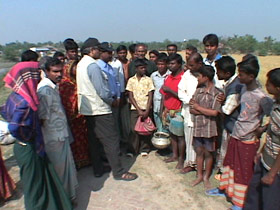 DE SAM LAZARO: The rice fields are less productive because salt water from storms and from river and sea water mixing has inundated them, a problem steadily worsening due to climate change, these farmers complained.

UNIDENTIFIED FARMER #1 (through translator): From past years to now, gradually the land is decreasing, going further and further down.

UNIDENTIFIED FARMER #2 (through translator): We really don’t know but it’s our guess that the developed countries that have big factories and machinery, they’re producing some gases. These gases mix with the air, and that is making the environment polluted, having the negative effect on our soil.

Dr. ATIQ RAHMAN (Executive Director, Bangladesh Centre for Advanced Studies, pointing to map): So the ocean will rise this way, and the central flood plain will be inundated more.

DE SAM LAZARO: He says Bangladesh is pummeled from the south by cyclones and flooded from the north by the major rivers swollen by warming glaciers in the Himalayas. In this, the dry season, it’s easy to see the impact in erosion. Like people, trees struggle to stay rooted here. If, as some scientists predict, sea levels rise significantly by the end of this century, a lot of Bangladesh will simply disappear.

Dr. RAHMAN: If the sea level rises by a meter, this is the amount of land that will disappear or go under water.

DE SAM LAZARO: About a quarter of the land mass?

Dr. RAHMAN: About a quarter of the land mass.

DE SAM LAZARO: It’s already happening. In the capital, alongside new skyscrapers are burgeoning slums, their teetering stilts a water mark of the wet season. Joynal Mollah moved into this small room four years ago with his wife and four young children, They scraped by as laborers and earned less than two dollars a day. The land his family had farmed for 200 years and the home on it simply fell into the river, he says.

JOYNAL MOLLAH (through translator): I used to have a piece of land, a third of an acre. We used to have a home. It had a big kitchen. As I lost my land and house in the village, the situation compelled me to come here. Otherwise, no one would live in a place like this.

DE SAM LAZARO: Even here, there’s simply no room. Bangladesh, the size of Iowa, has a population of 146 million. Non-government and some government agencies are trying to adapt to the new realities. The Bangladesh Rice Institute is trying to develop strains that can grow in more saline soils. In the northwest, 1,200 primary students go to school on specially designed boats, the classrooms powered by solar panels. The idea belongs to a 30-year-old architect who says its time to reconcile with spending life on water.

MOHAMMAD REZWAN (Executive Director, Shidhulai Swanirvar Sangstha): We can see that it is possible to run the completed education system on the boat. Our next step is to develop the floating houses. If it is done, then we’ll work on floating farming techniques.

DE SAM LAZARO: There’s no shortage of innovative projects to feed, shelter, and educate families. But they’ll need to get much larger to put more than a small dent in the enormous need, and it’s hard to focus on anything beyond the here and now. Even as relief agencies take on the long-term effects of climate change, their efforts to tackle it are always likely to be hindered by the immediate, desperate needs of victims of this country’s frequent natural disasters.

For Religion & Ethics NewsWeekly, this is Fred de Sam Lazaro in Morulganj, Bangladesh.