According to a new political survey from the Henry Institute at Calvin College in Michigan, significant numbers of religious voters remain undecided. Despite some dissatisfaction with McCain, a majority of evangelicals did say they’ll probably end up voting for him. And for the first time in polling history, the survey found that more mainline Protestants now identify themselves as Democrats than as Republicans. 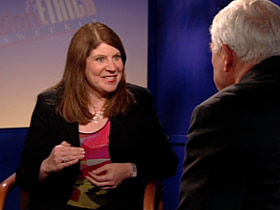 Joining me with more is RELIGION & ETHICS NEWSWEEKLY managing editor Kim Lawton. Kim, welcome. Tell us more about that Obama meeting with some big names in American religious life.

KIM LAWTON (Managing Editor, RELIGION & ETHICS NEWSWEEKLY): It was officially an off-the-record meeting, but we found out some details about it. There were representatives from across the Christian spectrum there: Catholic leaders, mainline Protestant leaders, but the majority of the people there were evangelicals. And you had some people like Franklin Graham, the son of evangelist Billy Graham. You had Rich Cizik from the National Association of Evangelicals. T.D. Jakes, the big megachurch pastor and author, was there. They talked very candidly with Senator Obama about a range of issues. The senator talked about his own spiritual journey, and they asked him questions about what he believes — theological questions, I’m told. Some people asked him some pretty tough questions about things like abortion, gay rights. Not everybody in the room will probably vote for Obama — probably never voted for a Democrat. But they came away being impressed, I’m told, with how he handled himself, and at the end of the meeting they all prayed with him. Some of them actually laid hands on him in that traditional Christian practice.

ABERNETHY: And about the evangelicals — they used to be the core base of the hard religious right — now still heavily for McCain?

Ms. LAWTON: But not quite at the same levels as they were for George Bush in the last election, and I think that’s what’s got some people interested. There are a large number of evangelicals, about 18 percent, still undecided, and we’re hearing from some of the leaders of the movement that they’re just not that enthused about the McCain campaign and about John McCain. And so I think the Republicans have a big challenge in trying to make sure that that base is energized because, indeed, they represented 40 percent of George Bush’s total vote in the last election, so they need those evangelical votes.

ABERNETHY: Kim, many thanks. There is more on the campaigns’ faith-based outreach strategies and the Calvin College survey on our One Nation page.