BOB ABERNETHY, anchor: Sometimes the stories we tell on this program have a dramatic effect, as one did last summer about a struggling, itinerant black pastor in Louisiana — a modern-day circuit rider driving his old car from one poor, little church to another every Sunday. That story was seen by a white pastor in Texas with a large, upscale congregation, and Lucky Severson tells what happened.

LUCKY SEVERSON: David Brown is a modern-day circuit rider, pastor of seven Baptist congregations in Mississippi and Louisiana. Every Sunday he visits at least three of them, driving hundreds of miles in his battered Chevrolet. 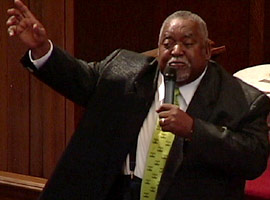 SEVERSON: What he earns is whatever goes into the collection plate. Pastor Brown has high blood pressure, diabetes, and no health insurance. He is dedicated to serving congregations that are too small to have a pastor of their own.

Pastor ROBBINS (to congregation): Now I have a nice church with a steady salary, with insurance, a pension plan, a great staff. Pastor Brown doesn’t have those luxuries.

Pastor BROWN (preaching): Well, I got somebody. He takes me in his arms, he rocks me when I’m weary. He tells me that I’m his own. Oh, he’s all right, he’s all right.

SEVERSON: Last summer, when we first reported on the ministry of Pastor Brown, Pastor Robbins was watching, and he says he has watched the segment over and over since then. 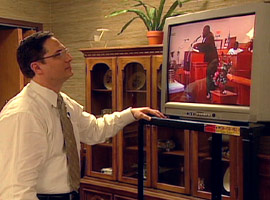 Pastor ROBBINS (to congregation): He said several things in there that absolutely changed me. I needed to get in touch with him. I needed to let him know that just watching him on television made a difference in my life.

SEVERSON: Pastor Robbins has a well-heeled congregation — a lot of doctors, lawyers, oil company executives. But he says they give generously of their time and money to charities and causes. The latest cause is Pastor David Brown.

SEVERSON: Robbins tracked him down and after a series of phone conversations invited Brown to come preach to his congregation.

Pastor ROBBINS (to Pastor Brown): And I want to take you down to the sanctuary. I want you to see the beautiful sanctuary.

SEVERSON: He and his wife Gwendolyn arrived in a borrowed car because the transmission in his well-used Chevy finally gave out on him. 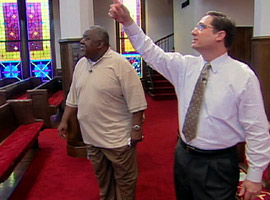 Pastor ROBBINS: Pastor Brown, Gwendolyn, what do you think? Beautiful, isn’t it?

Pastor ROBBINS: This is it, and the beautiful stained glass from the floor all the way to the ceiling…

Pastor BROWN: I’ve only seen stuff like this on television, in books and stuff.

Pastor ROBBINS (to Pastor Brown): Let me see how you look up there. You look like a preacher.

SEVERSON: Brown told us that coming here was one of the highlights of his life and that his brand of preaching would be a new experience for a congregation like the one here. 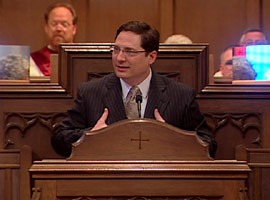 SEVERSON: Robbins, on the other hand, is new school. He has a doctorate in theology from Southern Methodist University, but he found inspiration in the life and ministry of Pastor Brown. Robbins’ friends say he has found a mentor.

Pastor ROBBINS: I have a lot of stability in my life when it comes to those worldly kinds of things, and this is a man who lives from hand to mouth. This is a man who tries to find a way to get from one church to the next in a broken down, worn out car that may or may not make it to the next stop, and yet he continues to have such a great faith and a willingness to have such passion for what he believes in, and I want to be like that.

SEVERSON (to Pastor Brown): You’re a black Baptist preacher from Louisiana preaching to a mostly white congregation. There’s something a little unusual about that picture.

Pastor BROWN: Yeah it is, it is, but they all have one thing in common. They have souls that need the gospel, and I’m here to deliver it.

Pastor ROBBINS (to congregation): It is truly, truly for me an honor and privilege to have you here and for Pastor Brown, for you to stand in my pulpit. 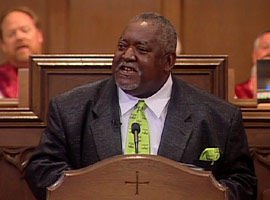 Pastor BROWN (to congregation): What a mighty God we serve. He is good in his greatness and great in his goodness, and his mercy endures forever.

SEVERSON: Members here had already sent Pastor Brown several hundred dollars to help with his ministry. Pastor Robbins suggested they might want to be extra generous when the collection plates were passed around before the circuit preacher gave his sermon. And what a sermon it was.

I’ve had people ask me, from the larger congregations, “Why do you preach so passionately to a few people like you do when there’s a crowd of people?” I say everybody’s just as important, there’s just more of them. That’s the only difference. 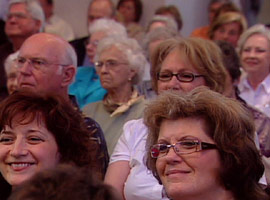 (preaching) I heard that there was a strange man came to this big church. He went to sit in one place, and he said, “No you can’t sit. That’s the chairman of the board’s place. You can’t sit there.” He moved again. He said, “Well, that’s the chairman of the finance committee’s seat.” Finally, one of the member’s came over and said, “Stranger, what happened to you? You got holes in your hands, holes in your feet?” He said, “Over 2008 years ago, I took your place on a Roman cross.” What am I saying? He took our place. He died in our stead, and we ought to live for him. All right? Praise the Lord. May God bless you.

PAT THOMAS: Did you feel how he energizes the place? I mean, he makes the Bible come alive. He made it come alive. And he had no color.

MARY DALE THOMAS: This man is — we could call him a missionary to the Methodists.

JAN MCCAULEY: We can live in a very insular world if we’re not careful, and that the vast majority of the world, 99 percent of the world, is not our world.

SEVERSON: The offering on Pastor Brown’s behalf amounted to over $14,000. When he got back to Louisiana, the pastor immediately got his transmission fixed but then learned he needed a new engine. That may not be necessary, because church members are now raising additional money to buy him a new car.