DEBORAH POTTER, guest anchor: They were once called circuit riders–itinerant preachers who went from town to town in 19th-century America to spread the Gospel. Since then they’ve gone from horseback to automobile, but they’re still around. No one knows just how many there are, but they serve the same purpose they always have–to bring a religious message to people with no fulltime preacher of their own. Lucky Severson reports.

LUCKY SEVERSON: Sunday morning at the Bethlehem Baptist Church in Vicksburg, Mississippi. Pastor David Brown had already driven 80 miles in his aging Chevy when he arrived in this old Civil War town, past the cannon, past the graves of the war dead. Bethlehem is a small but proud congregation founded by former slaves in 1866. This is the first stop of what for Pastor Brown will be a very long day.

Pastor DAVID BROWN: Okay, I got three services today. I know I’ve got to go from nine o’clock until nine o’clock. That’s 12 hours. 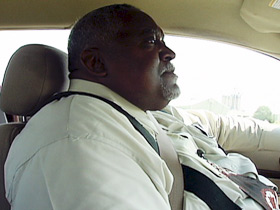 SEVERSON: The service, which began at 11, won’t end until after 1:00. He’s got two more before the day is done. In all, Brown is pastor of seven churches in Mississippi and Louisiana. On days when he’s not there, they go to Sunday school. But he visits each church at least once month with all his heart and soul.

Pastor BROWN (singing before congregation): Yeah, I been sometimes up, sometimes down, sometimes right, sometimes wrong, but I got somebody. He takes me in his arms. He rocks me when I’m weary. He tells me that I’m his own. Oh, he’s all right. He’s all right. Oh yeah!

SEVERSON: He gets pretty worked up when he preaches, doesn’t he?

SEVERSON: The tradition of circuit riders, or pastors on horseback, began with Methodist preachers in the early 19th century. After the Civil War, former slaves were allowed to have churches on the plantations. But the congregations were too small and too poor to afford full-time preachers.

Hollywood portrayed the circuit rider as a tough guy who rode into town, took on the bad guys…and lo and behold, he turns out to be a preacher.

CLINT EASTWOOD (from film “Pale Rider”): Good evening. Hope I’m not the cause of all this excitement.

SEVERSON: The reality was not so glamorous. In their lifetimes, the preachers often traveled thousands of miles on horseback from one small town to another. No one seems to know how many circuit preachers there are today. 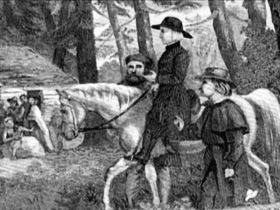 After lunch at a fast food joint, Pastor Brown is on the road again–30 miles to his next stop across the Mississippi River, back into Louisiana. He was one of 12 children, with preachers and deacons on both sides of the family. He says it’s in his blood.

Pastor BROWN: You think about it sometimes. You get real worn out, and you think about what I could do better. This is what the Lord has given you. That keeps you going.

SEVERSON: His wife Gwendolyn thinks he goes too much.

GWENDOLYN BROWN: He doesn’t say “no” a lot. Sometimes he’s overbooked. But he feels he owes it to the community because God has called him to do a mission.

SEVERSON: He often works late into the night preparing his sermons, a different one for each church. This is Pastor Brown’s second stop of the day, the Pleasant Grove Baptist Church #2 in Tallulah, Louisiana. The congregation here is very small and would have a difficult time supporting a fulltime preacher. So, for the people here, Pastor Brown is a godsend.

(speaking to Pastor Brown): What are you going to talk about here?

Pastor BROWN: I’m going to talk about “Not without God.” Without God, it’s impossible to do anything.

SEVERSON: Tallulah had seen better days before the saw mill closed and the jobs moved away. But the pastor tells his people not to give up on God. 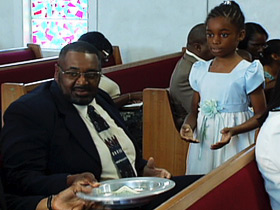 SEVERSON: Brown likely would have made a better living if he had become a mortician as he originally planned. His earnings as a circuit preacher amount to whatever is in the collection plate, which is usually not enough. His wife has cancer. He has high blood pressure, diabetes, and no health insurance.

Pastor BROWN: You’ve got to believe that at the end of the day the Lord’s going to provide enough for me, for what I need next week. When we pray we say, “Give us this day our daily bread.” So I expect him to provide for me and my family what I’m going to need this week. And then next Sunday he’ll provide again for the next week. And it’s always happened that way for 31 years.

SEVERSON: He augments his meager income by selling CDs of his sermons. He also preaches at revivals throughout the region. But his job as pastor demands much more than one day a week.

(speaking to Pammy Hall): If you have need of a preacher during the week, is that a problem if he’s not here?

SEVERSON: During the week, when he’s not preaching, he marries people and buries people, often traveling many miles. On this day he’s making a house call to pray with a man who just had an eye operation. 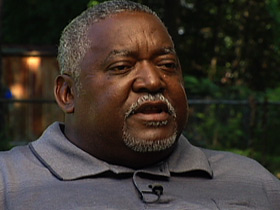 Pastor BROWN (praying at Mitchell house): We pray for this family. We pray for all who come through these doors. In the powerful name of Jesus, we pray. Amen. Amen.

SEVERSON: At one point he was getting so many speeding tickets the state threatened to suspend his license for seven years. Now he gets along well with the state police.

Pastor BROWN: Most of them knew my car, you know what I mean.

SEVERSON: There goes Pastor Brown, speeding down the road?

Pastor BROWN: Yeah, speeding again. He tells me, “You’d better slow it down, pastor.” Sometimes they pull up alongside, point their finger at me, and stuff like that.

SEVERSON: His third service of the day–back in Vicksburg at the Ebenezer Baptist Church. By now it is late afternoon. As with most churches he pastors, there are fewer members today than a few years.

Pastor BROWN: I’ve had people ask me, from the larger congregations, “Why do you preach so passionately to a few people, like you do when there’s a crowd of people?” I say everybody’s just as important. There’s just more of them. That’s the only difference. They have souls that need to be fed, and they have needs that need to be met. And the Word has to get to them. I look at it as a life and death situation.

SEVERSON: And as the churches get smaller, and Pastor Brown gets older and wearier, members get worried.

HOOVER YOUNGER (Congregation Member, Ebenezer Baptist Church, Vicksburg): I told him, I said, I can understand you’re getting old. I done reached old–but still more work to be done. 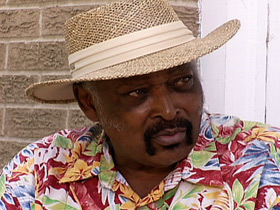 WILLIE HENRY SMITH, SR (Congregation Member, Ebenezer Baptist Church, Vicksburg): I would to God that Reverend Brown would stay here for a lifetime. But as you know, we’re all going to pass off the scene. After he’s gone, we’re still going to have somebody else here to carry on. But see–because the church must go on. You still got to have somebody else that you can put your trust in and believe in.

SEVERSON: This was his third sermon, and he’s still wound up.

Pastor BROWN: It’s a passion. It’s a love that you develop for the people. This is something you just can’t quit. They say, “Well, how do you get into the ministry?” I tell them that the ministry gets you. You don’t get the ministry. It gets you.

Pastor BROWN: I guess this is it for today. Well, I’m going to head back to Monroe.

SEVERSON: It’s 7:30 in the evening, and he still has an 80-mile drive home. The churches count on him to return sometime soon. But someday he’ll cross the Mississippi River, and he won’t come back. Who will take his place?