BOB ABERNETHY, anchor: The Dalai Lama is now here in the US for nearly a month of teaching across the country. He is the world’s best-known representative of Tibetan Buddhism, perhaps of all Buddhism. But now another potential Buddhist leader is emerging. The Dalai Lama, who turned 73 last Sunday, leads one of the four schools or denominations within Tibetan Buddhism. The 23-year-old Karmapa Lama leads another. His supporters believe he may one day succeed the older man as Buddhism’s leading international voice. Recently the Karmapa visited the US for the first time, and Kim Lawton talked with him.

KIM LAWTON: They call him a reincarnation of the living Buddha, and this young spiritual leader is already on his way to international superstar status. His name is Ogyen Trinley Dorje. His title is the 17th Karmapa Lama, and after the Dalai Lama he’s now Tibetan Buddhism’s second-highest ranking spiritual leader. During a recent visit to the US, his first introduction to the West, thousands came out to venues from New York to Seattle to see the 23-year-old Buddhist master.

DZOCHEN PONLOP RINPOCHE (Narlanda West Buddhist Center): The young Kamarpa is the most powerful Buddhist meditation teacher. His scholarship is excellent, and also his youth and his presence makes a profound impact. 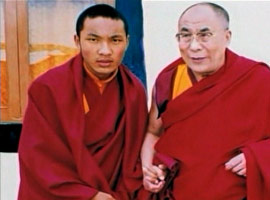 LAWTON: The term “karmapa” literally means the embodiment of all the activities of the Buddhas. For the last nearly 1,000 years, a Karmapa Lama has led the Kagyu tradition within Tibetan Buddhism. Buddhists believe enlightened spiritual masters can choose to be reincarnated in order to come back and help others achieve enlightenment. This Karmapa’s followers see him as part of an unbroken line of Buddhist wisdom.

LAMA SURYA DAS (Western Buddhist Teachers Network): He feels very close to us from the last life and through all of our good aspirations and good things that we have been trying to do together to help bring peace and sanity and wisdom and love into this very volatile modern world.

LAWTON: In an exclusive American television interview, the Karmapa told me he’s pleased with how Buddhism has taken hold in the US.

GYALWANG KARMAPA (through translator): Americans have taken a great interest in Buddhism and many Americans have put forth a lot of energy in order to propagate the teachings of Buddhism, and I think they have achieved excellent results within this short period of time. 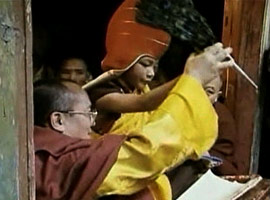 LAWTON: The Karmapa’s international acclaim is enhanced by the dramatic story that surrounds him. He was born in 1985 to a family of nomads in eastern Tibet. When he was eight years old, he was identified as fulfilling the prophecy left by the previous Karmapa who had died in 1981. The Dalai Lama had a dream which confirmed the recognition of the new Karmapa, and Dorje was taken to live in a monastery. Although some rivals support a different Karmapa, Dorje is the only high lama to have been officially recognized by both the Dalai Lama and the Chinese government. But China keeps a tight reign on Buddhism in Tibet, and when he was 14 Dorje snuck out of his monastery and made a secret escape across the Himalayas by foot, horseback, taxi, and train. Eight days later, he arrived in Dharamsala, India, headquarters of the Dalai Lama, where he has spent the past several years in study and meditation. As the heads of two different streams within Tibetan Buddhism, Karmapas and Dalai Lamas have historically been rivals. That has now changed.

SURYA DAS: This Kamarpa 17th is very close to the Dalai Lama and lives in Dharamsala, and they’re like this. So there is no sectarian rivalry or anything. They’re very much close together.

LAWTON: That closeness has led many to suggest that the Dalai Lama, now 73, is grooming the Karmapa as his spiritual heir and the next international voice of Buddhism. It’s a suggestion the Karmapa doesn’t shy away from. 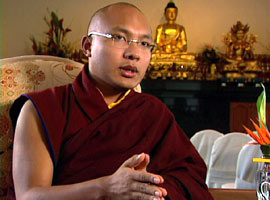 GYALWANG KARMAPA (through translator): I have no special plans to take over any specific role after whenever it is that His Holiness the Dali Lama passes away. However, I would be delighted to serve in accordance with the level of confidence and trust the people had in me. It does seem to be the case that I am receiving more and more recognition in the world, and my main aspiration is that I use this recognition for a beneficial purpose.

LAWTON: Because the Dalai Lama heads the Tibetan government-in-exile, there is much speculation about the Karmapa’s potential role in China-Tibet politics as well. He avoided such sensitive topics during his visit to the US, and steered questions about politics back to the practice of Buddhism in Tibet.

LAWTON: As his public role now expands, expectations about his future leadership are high. With his trip to the US, the teachings he once gave to private audiences at his monastery are being sold on DVDs and posted on the Internet.

PONLOP RINPOCHE: I’m not talking politics but from spiritual point of view. You know, he is like a spiritual king. Naturally he has that presence, he has that command. 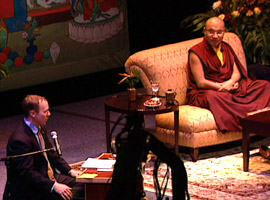 LAWTON: The Karmapa is learning English, although not yet confident enough to teach or give an interview in the language. But a few words trickle through.

LAWTON: He can come across as uncomfortable, reserved, even stern. Yet there are flashes of humor, too.

LAWTON: It’s easy to forget he’s only 23. During one Seattle appearance, he mentioned that he used to like reading X-Men comic books, but then people stopped giving them to him. So we got him one. In many ways, he’s been isolated, his responsibilities pressed upon him since he was a small child.

GYALWANG KARMAPA (teaching through a translator): And I would think thoughts like, why are my attendants who are disciples of the Karmapa making my life so miserable? Why are they locking me in a box and putting on the lid?

LAWTON: Followers say this Karmapa is well aware that technology has made the world a smaller place and that Buddhism must stay relevant.

GYALWANG KARMAPA (through translator): Because of the Internet, we live in an age in which information can travel very rapidly to different places. Before, it used to be the case that just having a Karmapa alive was good enough for everyone. People didn’t need a lot of information about who the Karmapa was or what the Karmapa was doing.

SURYA DAS: He has continuously talked about not holding on to things just because they’re old, but to adapt, and keep the essence, but to adapt to new times and places.

GYALWANG KARMAPA (through translator): The essential points of Buddhism are beyond culture and beyond traditions.

LAWTON: Given the level of devotion he’s already cultivating in the West, his followers say this Karmapa Lama may well be the future face of Buddhism around the world.