Those were the opening lines of the 1943 Academy Award-winning “Song of Bernadette,” a movie about the Marian apparitions at Lourdes in southwest France. But there are, in fact, explanations for why Lourdes has gone from a town of 14,000 inhabitants where, in 1858, a peasant girl named Bernadette Soubirous said she saw “a lady dressed in white” to an international pilgrimage destination that now hosts more than 5 million visitors a year. According to the story, when Bernadette, who could not read or write and who barely passed her religious education classes, asked the lady her name, she responded, “I am the Immaculate Conception.” The faithful believed her to be the Virgin Mary, and she is said to have appeared to Bernadette 18 times.

The Roman Catholic Church recognized Lourdes as a holy place in 1862 and Bernadette’s visions of Mary in a cave as authentic. Saint Bernadette was canonized in 1933, as patron of the sick, and Lourdes emerged as one of the premier pilgrimage sites in the world. People from all walks of life, many of them using wheelchairs and canes, come to be healed by water that flows from a spring dug by Bernadette herself, or to help those who are seriously ill and in need of assistance during their pilgrimage. The water is believed to be blessed with healing properties.

Father James Martin, a Jesuit priest, writer, and authority on Lourdes who has visited the town many times, says what interests him are the communal aspects of the pilgrimage experience and the healing aspects of the place. In addition to Mary, he says, “it’s the character of Bernadette that draws me. She was completely uninterested in impressing people. She was very authentic. She wanted to tell her story with no personal gain, and that is the mark of a true saint.”

Robert Lively, vice president of a pharmaceutical company in Washington, DC, and a member of the Order of Malta, a Roman Catholic service organization, volunteers every year at Lourdes. He has made the trek eight times and says he intends to continue. What keeps him going back, he explains, is the “intensely powerful” experience he has had there, something he describes as “a healing of the heart.” All Lourdes pilgrims have their own personal experiences, he observes. “People overcome anxieties, fears, and are given hope.” His first visit, he says, was marked by fatigue and exasperation until he says he asked the Virgin Mary, “What should I pray for?” The reply he says he heard was, “If you would be forgiven, you first must forgive.”

Joe Michaud, an investment counselor in Colorado, has visited Lourdes every year since he first encountered it 19 years ago with his classmates from the Portsmouth Abbey School, a Benedictine secondary school in Rhode Island that offers student pilgrimages to Lourdes every summer. Michaud went from volunteering to running one of two annual Lourdes programs for his alma mater. Portsmouth students, mostly seniors, volunteer at the local train station, work in hospices providing care and maintenance for sick pilgrims, and assist in the baths of Lourdes where, during the summer months, there can often be up to an hour’s wait. First constructed in the 1950s, pilgrims immerse themselves in the water at the baths in response to an invitation Mary is believed to have made to Bernadette to drink of the spring she dug and wash herself.

“The students reevaluate their lives after working with the sick,” says Brother Joseph Byron, who has led Portsmouth Abbey School pilgrimages to Lourdes for almost two decades. “They realize how good they have it, and it humbles them. Lourdes is a wonderfully contained place where they can see the universal church in action.” 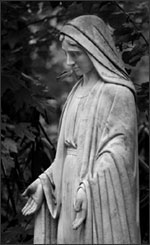 Michaud says he wants to ensure that future students can have a Lourdes experience similar to his own. “The lessons of Lourdes are applicable to everyday life,” he explains. “It has nothing to do with miracles. Small miracles happen every day.” What Lourdes can teach, he believes, is how to live with grace and humility. He adds that volunteers and students learn much about both of those virtues from the sick pilgrims. “The well-bodied get more out of the experiences with the sick than the sick do,” he suggests. “The lesson of Lourdes is about redemption, not in a profound way, but in a very small and human way. It’s not about how many times you fall in life, but how many times you pick yourself up. It is a wonderful part of being a Christian.”

This spring the Roman Catholic Church officially recognized a shrine in the French Alps where the Virgin Mary is said to have appeared in the 17th century to a young shepherdess, the first recognition of an apparition in France since Bernadette’s vision.

But when Pope Benedict XVI travels to France in September, it will be to visit Lourdes, to mark the 150th anniversary of the Marian apparitions and to recognize “the tireless volunteers and companions, and especially the hopeful malades,” as James Martin has written. For a century and a half, all have come to Lourdes for different reasons, but all come hoping for some kind of physical, emotional, or spiritual healing.