Humorist Will Rogers was famous for joking, “I am a member of no organized political party. I am a Democrat.” The 2008 Democratic National Convention demonstrated just how far removed today’s Democratic Party is from that of Rogers’ day.

Yes, there was the usual on-floor and after-session partying. But this convention was more carefully orchestrated than most Democratic conventions. It was the product of angry and determined professionals — people tired of eight years of G.O.P. control of the White House.

To a large degree, convention planners succeeded. Speeches by Bill and Hillary Clinton went a long way toward mollifying diehard Hillary supporters and creating a sense of party unity. The spectacular appearance of Obama in an outdoor stadium before 70,000 adoring supporters was a political master-stroke. All of the speakers were well-coiffed and well-prepared for their pre-established roles. Democrats left the convention with good reason to expect a smashing victory in November.

On the other hand, the Democratic Convention may have left some party supporters longing for the good old days. To be sure, no one wanted a return to the chaos of 1968.  But 2008 seemed to lack the authenticity of past conventions. Is Michelle Obama really the middle-class housewife portrayed in her speech? Have the Clintons really made peace with Obama? Can Obama, with his appeals to voter self-interest, truly be as inspirational as John F. Kennedy, with his appeals to altruism and self-sacrifice?

The Democrats’ authenticity issues were starkly illustrated by their valiant but controversial faith initiatives at the convention. They did their best to remove the party’s anti-faith image. Democrats organized “faith concerns” meetings led by Christians, Muslims, and Jews. Obama selected Catholic layman Joe Biden as his running mate. Nancy Pelosi presented her interpretation of Catholic abortion policy on Meet the Press. Speakers made use of religious rhetoric.

Yet nagging doubts about the Democrats’ seemingly newfound commitment to religion remained, especially among the conservative evangelical voters who are so crucial to electoral success, particularly in southern states. One reason is that, despite the welter of news stories about the emerging evangelical “center” with a social justice agenda, Democrats differ strongly with evangelicals on the two issues that continue to matter most to Protestant (and Catholic) conservatives — abortion and gay rights. 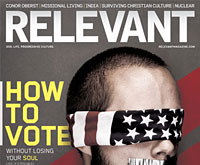 Efforts to downplay or explain away these differences proved difficult and even embarrassing, as when the Archbishop of Washington took sharp issue with Nancy Pelosi’s interpretation of Catholic theology. Prominent black and Jewish leaders challenged the party on issues ranging from abortion to school choice. And Cameron Strang, founder of RELEVANT, a Christian magazine for twenty-somethings, embarrassed party leaders by refusing to give the closing benediction on the first day of the convention.

So how should one evaluate the success or failure of the Democrats’ faith initiative? On the negative side, the efforts seemed strained and unlikely to convince religious conservatives to vote for Obama. On the other hand, the Democrats do not need to win most of the conservative evangelical vote to win in 2008; they simply need to erode G.O.P. support among group members. In that, they may have succeeded.

Some conservative evangelicals may give Democrats grudging credit for addressing religious issues, even if done in a somewhat clumsy fashion. More moderate evangelicals may, to some extent, be attracted by Democratic efforts to appeal to the strong social justice tradition of American Protestantism. But perhaps even more important, particularly in the long run, may be the Democrats’ efforts to appeal to growing nontraditional religious groups, such as Muslims, as well as to social justice-oriented mainline Protestants.

John McCain’s selection of culturally conservative Gov. Sarah Palin as his running mate may indeed reduce the numbers of evangelical defectors in 2008. But, in the longer term, the
Democrats’ newfound religion may work to the party’s advantage, provided that voters can be convinced the party’s religious appeals are genuine and not a cynical ploy to attract “the faithful.”

— James M. Penning is director of the Center for Social Research and professor of political science at Calvin College.