BOB ABERNETHY, host: At the White House extremism summit, prominent faith leaders, politicians, and law enforcement officials discussed the growing crisis generated by groups like ISIS, Boko Haram, and al-Qaeda. President Obama said that while those groups use religion to justify their atrocities, the US is not at war with Islam:

Joining me now, Haris Tarin, director of the Washington office of the Muslim Public Affairs Council who was at the White House summit, and our managing editor, Kim Lawton. Kim.

KIM LAWTON: Well, Haris, do you think the summit this week actually accomplished anything specific? 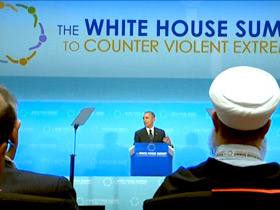 HARIS TARIN (Muslim Public Affairs Council): Well, I think the most important part of the summit was the president’s speech. He set a vision and trajectory for dealing with violent extremism. He came out really forcefully, saying that there needs to be communities who are the ones who are empowered to deal with the issue of violent extremism. Law enforcement and government agencies at times are not the real partners that are able to actually address this issue. It’s communities who need to be empowered.

ABERNETHY: Within this country.

TARIN: Within this country and internationally as well, Bob—both. I think it’s an organic thing that needs to happen, an organic movement to address this issue.

LAWTON: Prior to the summit many Muslims felt that it was too focused on Muslims and Islam being the problem. Did you share that concern? 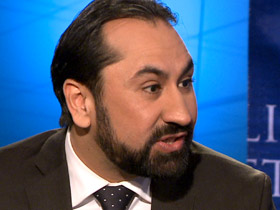 TARIN: We did, and I think especially on the heels of the Chapel Hill shootings. There’s a sense of fear in the American Muslim community that they’re being singled out. And I think a lot of folks had that sentiment. But I think the president’s remarks really helped allay some of those issues. He talked about the fact that Islam is not the problem. It’s terrorism that’s a human problem. He reiterated some of the remarks he had made at the National Prayer Breakfast that all faiths at times have gone through issues like this.

LAWTON: But for a lot of people, yes, maybe there are extremists in all faiths. But when we look at where the bulk of the problem is right now, many people say, “You know, it is Muslims who are using Islam to justify their atrocities.” So how do you respond to people when they make that argument?

TARIN: Well, I think it’s individuals and groups using a perverted version of Islam to justify atrocities. I think that’s the distinction we have to make is that if you lump in 1.5 billion people with the few institutions or organizations or people who are doing this, you risk marginalizing real allies that we need in this fight.

ABERNETHY: Haris, looking at this whole situation, it might seem to a lot of us that the Muslims themselves, the 1.5 billion, should be doing more. Should be doing more militarily to try to defeat and wipe out ISIS.

TARIN: I think, Bob, on-the-ground Muslims are the ones who are taking on the fight against ISIS. It’s the Kurdish Muslims, the Syrian Muslims, the Iraqi Muslims who are getting the casualties, who are dying on the ground, trying to push ISIS back on a daily basis. So they are taking up the fight. 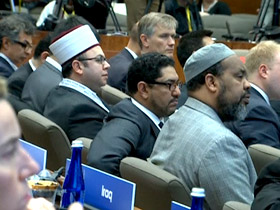 ABERNETHY: Do they need help?

TARIN: They do. I think they need support from the international community, from the U.S., the European Union, the Middle East and North African countries.

ABERNETHY: What kind of support? Arms or troops?

TARIN: I don’t think they need troops. What they need is financial support. They might need some arms, but it’s important that we continue to empower local communities to take on this fight. We’re not going to win this by sending troops in.

ABERNETHY: Do Muslims in the Middle East blame the United States for some of this stuff that’s going on?

TARIN: Well, I think there’s a sentiment in that region that because of the U.S. invasion in Iraq there was a power vacuum that was created. And that power vacuum was filled by groups like Al Qaeda and ISIS, because there’s the notion that Al Qaeda did not exist in that region prior to that invasion. And I think that’s a sentiment that’s felt on the ground that we have to understand when we deal—when we’re trying to deal with the broader issue.

LAWTON: And not just militarily, but what about theologically? Is there a theological counteroffensive going on there in the region to counter, you know, these things that you say are perverted versions of Islam?

TARIN: There is. When ISIS started its atrocities, there was a group of over 150 international Muslim scholars who came together and debunked every single idea that ISIS had put out. But it has to go beyond the scholars, Kim, it has to go to the social media realm, because that’s where ISIS really functions. They don’t function in mosques or communities; they are predators online, and I think there needs to be an organic movement online to address the arguments of ISIS.

LAWTON: Is that happening? Is it starting to happen?

TARIN: It’s slowly starting to happen. You know, the average Muslim has a daily life to lead. They’re not online trolling ISIS on a daily basis. But there are institutions and individuals and groups that are taking on the mantle and starting to put out the real narrative online.

ABERNETHY: Haris Tarin of the Muslim Public Affairs Council, many thanks to you. It’s good to have you back. And Kim, thank you.

Watch our conversation with Haris Tarin, director of the Washington office of the Muslim Public Affairs Council, about the White House summit on countering violent extremism.