BOB ABERNETHY, anchor: We examine now how the media should cover candidates. Should religious beliefs, or anything else, be off limits — a candidate’s family, personal life, pastor?

Michael Getler is a longtime correspondent and editor at The Washington Post. He’s now the ombudsman for PBS. Tom Rosenstiel directs the Pew Project for Excellence in Journalism in Washington. He’s co-author of the widely used textbook, “The Elements of Journalism.” And Kelly McBride heads the ethics department at the Poynter Institute in Florida, which trains journalists. She joins us from Tampa.

Welcome to you all. Kelly, some candidates say, or used to say, that their religious beliefs are their private business. You say it’s important to report what those beliefs are. Why? 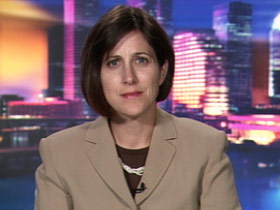 KELLY MCBRIDE (Ethics Department, The Poynter Institute): Well, I think religion is important in American life. We’re a very religious country. Everybody has some form of belief system, and I think to examine that belief system and how it informs a political candidate and how he or she might make decisions is information that voters deserve to know.

ABERNETHY: How a person in office might be guided by religious beliefs in decision-making?

Ms. MCBRIDE: Yes, or not guided. I don’t think we should presume that a certain theology dictates that a candidate who belongs to that church would act in a certain way. But I think it’s entirely appropriate to ask the question.

ABERNETHY: Tom Rosenstiel, how are we doing this year?

TOM ROSENSTIEL (Director, Pew Project for Excellence in Journalism and Co-Author, “The Elements of Journalism”): Well there is no systematic coverage or examination of the belief systems of these candidates… 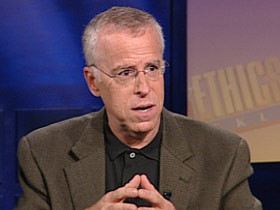 Mr. ROSENSTIEL: …when it comes to their religion. What we’re seeing is episodic coverage that — Mitt Romney will give a speech about his religion, or tapes will come out of Obama’s pastor or from Palin’s church, and often the coverage of that relates to the political impact of how they deal with these tempests. The reason for that is, I think, twofold: one is that we have political writers covering these candidates, not people who understand the nuance of religion. It’s not, however, because the candidates don’t want to talk about this stuff. Barack Obama’s made a special effort, I think, this year to talk about faith in his life because he thought that this was a failing of Democrats that was limiting their appeal.

MICHAEL GETLER (PBS Ombudsman): I’m sorry, I was going to say I think it’s also — while it’s very important to focus on this, as Kelly pointed out originally, it’s also good to keep in mind that there are millions of people who are not terribly religious in this country, and other religions that are not mainstream, and too much of a focus on it, it seems to me, works against people who may be very good at what they do. They may be very good politicians. They may be very good at governance, and yet for somehow the religious issue becomes almost too prominent. So that bothers me a little bit.

Mr. GETLER: Yes, there are things that are off limits, but it’s less than it use to be. I mean, I think part of the understanding that is that the press is no longer the way it used to be. It used to be just a couple of major newspapers and magazines and wire services and whatnot. Now it’s an enormous world including the Internet, which is just vast, and cable television and everything else. So where they used to be gatekeepers, which was The New York Times and The Washington Post and AP and others, those newspapers try to stick to their same standards, but it’s very hard to do that now because information comes out all over the place and it’s very, very — so there are things that should be off limits, but it’s very hard to keep them off limits.

Mr. ROSENSTIEL: I would say in presidential politics there really is no zone of privacy anymore. The one exception to this that is sort of holding is children. Politicians will use their kids and their families as visual images. We see that all the time. But the press proactively examining the backgrounds and experiences of children is still the one area. But in terms of anything else about a public figure and his or her life, I think there is no zone of privacy. There is less of an appetite among these mainstream outlets that Mike’s talking about to get into it. But they will now be pushed into it. 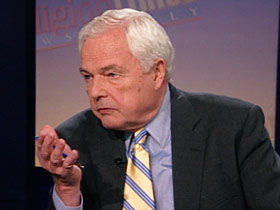 ABERNETHY: Kelly, what have you seen in this campaign about the way in which things relating to religion or privacy were reported? I’m thinking about the way everybody was fascinated by Reverend Jeremiah Wright and Obama’s relationship to him, about…

Ms. MCBRIDE: I think most of the reporting on religious issues has had a distorting effect. Most of the time in a political campaign when the media does focus on a religious issue, it’s as a distortion, or something that’s exotic or weird. So Reverend Wright was outside of the mainstream belief system, and there was a lot of focus on him and what the implication might be for Barack Obama when, in fact, Obama had spent weeks and months describing how his personal belief system and his faith guided him and influenced him. And Wright’s behavior and his theology, his belief system was really not much of a part of that. But because of the focus on that, it ended up distorting in the public’s mind Obama’s belief system. And I think you can say that almost every time.

Ms. MCBRIDE: Mormons, yeah, Mormons and Mitt Romney. In Sarah Palin’s case, her previous life as a Pentecostal, all of that, extremely distorting.

Mr. ROSENSTIEL: And a lot of this is because politics is about comfort. Am I comfortable with this person? Are they like me? Will they understand me? Particularly as we get to the general election phase when people who are not political junkies begin to check in and make decisions. 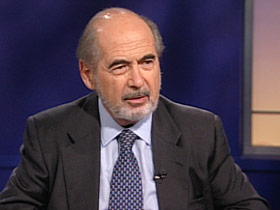 Mr. GETLER: Also Bob, in the past again, you would hear about this on your evening news broadcast, or you would read about it in your morning paper. Now you can see it a hundred times a day, and it adds to that sense of tension over it.

ABERNETHY: And what about the coverage of John Edwards’ affair? What did you make of that? Was it fair?

Mr. GETLER: Well, it was certainly fair once he acknowledged it on television. As you know, The National Enquirer pursued and broke the story, and eventually — but the main newspapers and magazines really did not cover it. And they didn’t actually even pursue it much, which I think was wrong. I think Edwards is a major national figure, and there was some reporting, as the Charlotte Observer showed, that you could do on public records that would at least move this story forward.

Mr. ROSENSTIEL: What the press needs to do is, in this environment, the mainstream reportorial press, is to be actually more aggressive about these things. Otherwise the agenda will be set by outlets and forces that don’t have the kind of professional standards that I think we would hope for.

ABERNETHY: More aggressive about what, about personal behavior?

Mr. ROSENSTIEL: About reporting allegations about personal behavior and then coming to a judgment, a professional, journalistic judgment about whether this is relevant or not. If they don’t report these things, then others will, and they’ll be reacting and writing about stuff that they might otherwise have said, “No. We’ve looked into it and this isn’t relevant.” The traditional press still has the power to take things off the table. This has happened numerous times. The Washington Post and Bob Dole said, “We’ve looked into it. It’s not relevant,” and that was the end of that. The rest of the press followed that lead.

Mr. GETLER: Yeah, that’s the difference between reporting and publishing, and right now the resources are diminished in a lot of papers, so that, I think, is a factor as well.

ABERNETHY: Michael Getler, Tom Rosenstiel, Kelly McBride, thanks to you all.