When was the last time Pennsylvania Avenue and Times Square and countless other locations across the country were packed with crowds at 1:00 in the morning following a presidential election? The same nation that elected George Bush by the hanging chads of 2000 has just given the presidency to someone who was relatively unknown at that time.

Will historians mark this election as the passing of a generation of American leadership that preferred partisan politics to productive policies? Can the massive and euphoric following of a President Obama resist the temptation to lord it over those who didn’t see their light? Can the idealistic and visionary Obama avoid the missteps associated with the failure of that other new kind of president, the one from Georgia, to master quickly enough the labyrinth that is Washington politics? Will the flawless campaign inspire a flawless first 100 days? Will the voices heard in “the backyards of Des Moines and the living rooms of Concord and the front porches of Charleston” continue to reach President Obama when he resides in the White House? These questions will be answered in short order, no doubt. 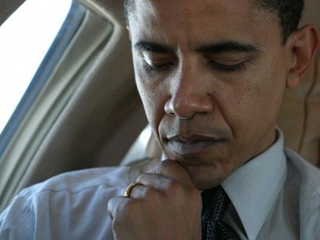 With a compelling popular and electoral college victory, Barack Obama can claim a clear mandate to address the economy, to restore the image of America abroad, to bring change and, perhaps much more importantly, to restore hope to a nation and a people desperately in need of it. Perhaps, just perhaps, on November 4, 2008, the nation itself somehow embodied the change we’ve heard so much about. After all, this is the same country where, less than 55 years ago, Rosa Parks and Martin Luther King gave soulful voice to freedom long denied, where Emmett Till and James Reeb, so different from one another, were beaten to death for the sins of others, where Selma and Montgomery and Bull Connor and Watts each exposed the ugliness of our American experiment struggling to maintain some semblance of order while unraveling in its inner core. Do you remember the events of Grant Park just forty years ago? On election night 2008, the same park hosted a genuine “rainbow coalition” that elected the nation’s first black president. What does it all mean?

In early May 1955, as the Supreme Court carried on its hearings about how Brown v. Board of Education might be made effective, Reinhold Niebuhr noted Madison’s observation that “it was easier to guarantee liberty than equality by legal means.” In referring to Madison’s insight, Niebuhr drew attention to the fact that liberty and equality were not synonymous; one did not lead automatically to the other. One could have in one’s possession all human liberties as guaranteed by law, while not yet having achieved equality. To have equality, one had to depend upon both the mores of the community and one’s access to a fair share of economic resources, neither being easily addressed by law. Where the mores of the community assume inequality, and the economy is governed mostly by privately held interests, equality is indeed hard for some citizens to come by. That lesson has especially been driven home in recent months.

The problem of racial prejudice has always reached much deeper into cultural life than just the way it has affected the rights and liberties of individuals. The problem facing African Americans in 1955, at the beginning of the civil rights movement, was systemic, deeply woven into the cultural fabric of the nation. One might say, in fact, that racism provided the “tacking stitch” that prevented the various pieces of American culture from moving out of their place. Historically, for the vast majority of American history, it has run through the whole religious, social, economic, and political quilt of American life. For that reason, racism has never been merely a problem solely preventing liberty or rights.

The total eradication of racism and other forms of mainstream cultural hatred has always demanded more than the simple act of imprisoning offending parties or voting out legislators who have kept particular Americans from exercising their God-given rights. American culture itself has always been the culprit. Individuals have only embodied it. To right the wrong of racism and prevent the spread of hate crimes of any other sort, every aspect of American life must be transformed. Only then can genuine equality be achieved for all Americans, those defined by Obama’s victory speech as “young and old, rich and poor, Democrat and Republican, black, white, Latino, Asian, Native American, gay, straight, disabled and not disabled.” The election of the first black American president just might signal a significant tipping point in that process. So long, that is, that President Obama himself both remembers and heeds the biblical injunction: “From everyone to whom much is given, much will be required” (Luke 12:48).

— Mark G. Toulouse is professor of American religious history at Brite Divinity School and the author of GOD IN PUBLIC: FOUR WAYS AMERICAN CHRISTIANITY AND PUBLIC LIFE RELATE (Westminster John Knox Press, 2006). Beginning January 1, he will be principal and professor of the history of Christianity at Emmanuel College, Victoria University, in the University of Toronto.