BOB ABERNETHY, anchor: The role religion will play in the administration remains to be seen, but in Washington this past week, faith was a major part of the inauguration festivities and the days that followed. Kim Lawton has our report.

President BARACK OBAMA (swearing in):  So help me God…

KIM LAWTON: President Barack Obama was known for his God-talk on the campaign trail, and that focus on religion continued in the first days of his new administration.

Obama began his Inauguration Day as many presidents before him have—with a private prayer service at St. John’s Episcopal Church across from the White House, then more prayer at the swearing-in ceremony. Megachurch pastor and bestselling author Rick Warren gave the invocation, and Reverend Joseph Lowery, the veteran civil rights leader, gave the benediction.

Obama’s inaugural address was sprinkled with several references to Scripture and to God.

President OBAMA (in inaugural speech):  This is the source of our confidence, the knowledge that God calls on us to shape an uncertain destiny. 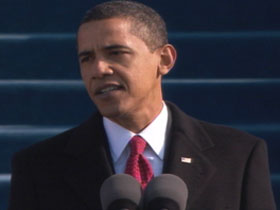 LAWTON: The two men who prayed at the ceremony are both Protestants, but Obama specifically praised America’s religious diversity.

Pres. OBAMA (in inaugural speech):  For we know that our patchwork heritage is a strength, not a weakness.  We are a nation of Christians and Muslims, Jews and Hindus, and nonbelievers.

LAWTON: Religious diversity was on full display Wednesday when the Obamas and the Bidens attended what was billed as a National Prayer Service at Washington’s National Cathedral.

Reverend SAMUEL LLOYD (Dean, National Cathedral, speaking at National Prayer Service):  This is their first full day on the job, and the best way we could imagine to begin is by praying with them and for them.

LAWTON: Protestant, Catholic, Jewish, Muslim and Hindu leaders were among those who took part in the service, offering prayers and guidance from their faith traditions.

Reverend SHARON WATKINS (President, Christian Church, Disciples of Christ):  What you are entering now, Mr. President and Mr. Vice-President, will tend to draw you away from your ethical center. But we, the nation that you serve, need you to hold the ground of your deepest values — of our deepest values.

LAWTON: Not everyone was happy about all the religion that was tied to the inauguration. A group of atheists launched an ultimately unsuccessful court battle to try and stop the official inaugural prayers. But as a recent survey for Religion and Ethics Newsweekly found, the majority of all Americans say they believe God has uniquely blessed this nation, and many expect that God should be acknowledged at big national events.

LAWTON: Faith-based activists at an interfaith peace service pledged to continue working toward King’s full vision for America. Many here were optimistic about a positive relationship between Obama’s administration and the religious community.

Reverend WILLIAM SINKFORD (President, Unitarian Universalist Association): President Obama really is grounded in his personal faith. I think he values the religious voice. I think it is wise of him to bring in a broad spectrum of that religious voice.

LAWTON: There was also high optimism among American Muslims, who sponsored their own inaugural gala. Many here praised Obama’s stated goal to improve relations between Islam and the West.

Pres. OBAMA (in inaugural speech): To the Muslim world, we seek a new way forward based on mutual interest and mutual respect. 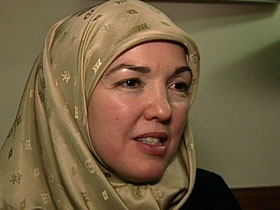 INGRID MATTSON (President, Islamic Society of North America): It’s very clear to me that many people in the Muslim world overseas are so eager for a positive message from the United States, and I’m very hopeful that we’re going to have an opportunity to convey that positive message and to do some healing.

LAWTON: But there was also concern this week in some sectors of the faith community. Tens of thousands of abortion opponents came to Washington Thursday for the annual March for Life, which marks the anniversary of the Supreme Court’s landmark Roe v Wade decision. Obama released a statement reaffirming his support for a woman’s right to choose. But he also urged new policies to reduce the number of abortions. Still, these activists are angered by administration plans to expand federal funding for abortion and for embryonic stem cell research.

TONY PERKINS (President, Family Research Council): There’s certainly some contrast here and concerns over some very fundamental issues of the respect of human life. Of course, then we get into the issue of marriage and of the traditional family — a lot of issues that raise concerns with us.

LAWTON: Family Research Council President Tony Perkins does praise the way Obama has incorporated faith-based outreach into his politics. Perkins says religious conservatives are willing to work with Obama when they can.

Mr. PERKINS: We’re not here to be adversaries of the president if he’s doing the right thing. We want to encourage him and help him do the right thing.  But we will, if forced to, take an adversarial role if he is moving the nation in the wrong direction, as it appears he is on the issue of life.

LAWTON: A spokesman for the new president says Obama is looking forward to working with “a range of partners in the faith community.” But keeping all those partners happy will be no easy task.

During his first Inauguration, President Obama discusses his plans and hopes for the American religious community.