BOB ABERNETHY, anchor: We have a story today about an ethical dilemma in the care of patients with Alzheimer's disease. More than five million Americans have that terrible illness, which gets progressively worse and for which there is no cure. After a certain point, should an Alzheimer's patient be kept alive with a feeding tube? Many family members say, of course: they should do everything possible to prolong a loved one's life. But some doctors say inserting a feeding tube is inhumane, because it can just prolong a vegetative state for years. All those involved say they want what is best for the patient. But who is right? And who should decide? Betty Rollin reports.

BETTY ROLLIN: Dorothy Gregory, who is 85, has end-stage Alzheimer’s and lives in a nursing home in North Carolina. She stopped eating five years ago, at which point a feeding tube was inserted into her abdomen. That was the decision of her nephew, Bobby Davis, whom she brought up.

(to Bobby Davis): Does she know who you are?

BOBBY DAVIS (Nephew of Dorothy Gregory): No, she doesn’t know who I am. She doesn’t know anyone. Mostly she’s like a vegetable almost, you know. She can’t talk. She can’t do anything for herself. She’s on that feeding tube. That’s the only thing keeping her alive. 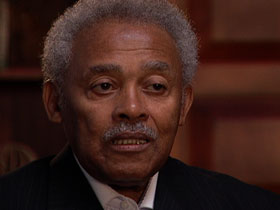 Dr. DOUG NELSON (Geriatrician, Hickory, NC): You go back to the Bible: Do unto others as you would have done unto you. I would never want somebody to do this to me, because when you look at the patient, they are sitting there. They’re crumpled. They develop bed sores. They get contractures. They can’t move their arms or legs. Their muscles just freeze up, and they are simply laying there existing, waiting for something else to happen that would finally kill them.

In a typical patient with Alzheimer’s, they gradually get worse and worse, and then at some point they stop eating. One of two things happens at that point. Either one, we keep the person comfortable. We continue to try to offer them food or water, or both and they eventually just peacefully pass away. Or sometimes what happens is the family insists on a feeding tube, and we’re forced to put a feeding tube in there, and then they will lay there for months or years.

ROLLIN (to Mr. Davis): If you had to make the decision again, would you have the tube put in?

Mr. DAVIS: That’s right. If you believe in God, a miracle might happen. But I just don’t think it’s right, you know, to choose whether a person lives or dies. 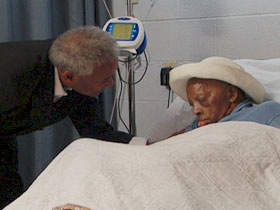 Dr. NELSON (with his patient Yula): How are you doing, girl?

ROLLIN: Many family members decide on the feeding tube because they think the alternative is starvation. But Dr. Nelson says that’s not how it is.

Dr. NELSON: The patient will die, but they will die of dehydration, not starvation. When you think about it, that’s how God designed most of us to die. We get some kind of disease. We stop eating and drinking. It’s the lack of water will kill us within a couple of weeks, not the lack of calories.

ROLLIN (to Dr. Nelson): How painful is that?

Dr. NELSON: It is not painful at all.

ROLLIN (to Dr. Nelson): Why, then, do family members choose a feeding tube?

Dr. NELSON: It’s always out of guilt, and we are the only Western country that I know of where it operates like that.

ROLLIN (to Dr. Nelson): Guilt of what sort?

Dr. NELSON: That they’re not doing everything that they could for their loved one. 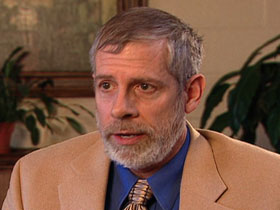 ROLLIN: Sharon Newell’s mother Barbara Kinley has suffered a series of strokes as well as dementia. After the feeding tube was inserted she got pneumonia, a common complication of the tube.

SHARON NEWELL (Daughter of Barbara Kinley): She was in intensive care for 28 days; on a ventilator for 14, and at that point the doctors and nurses and even other family members were like, “You need to turn it off and let her go,” etc., etc. That is just not — wasn’t an option. We are a religious family. My belief is in God and that we are all in his hands.

ROLLIN: Sharon has also seen to it that her mother has what is called “full code,” which means that everything medically possible should be done to keep her alive.

ROLLIN: Because her mother is on Medicaid, as most of these patients are, Sharon does not pay for these benefits. The average cost of a semi-private room in a nursing home is more than $72,000 a year plus the cost of whatever medical interventions are used. The insertion of a feeding tube is only a few thousand dollars, but the main cost is the result of the feeding tube which can prolong a patient’s life sometimes for years. Dr. Nelson is one of the few doctors who tries to convince families how bad a decision feeding tubes can be. But doctors are not paid to do that.

Dr. NELSON: And so from a money issue, most doctors that do nursing home work find it hard to take the time out to do it for free and talk with the families. So if the families say, “I want a feeding tube,” many times it’s a knee-jerk reaction: “OK, fine. We’ll do a feeding tube.”

ROLLIN: And not to comply with the families’ wishes is to risk being sued.

Dr. NELSON: If the family says, “I want a feeding tube in,” you have to put one in. All our malpractice insurance companies tell us if they do that, you put it in because if you don’t, patient dies, you go to court, you’ll lose in court.

ROLLIN: What bothers Dr. Nelson most of all about this situation is his conscience.

Dr. NELSON: I question myself: “Am I sinning by continuing to have this feeding tube?” When you look at the chart, the doctor’s name that signs the order for the feeding tube is Doug Nelson. And I always wonder what will happen when I get to heaven and I’m confronted by God: “Why did you keep signing your name to that if you thought it was wrong?” 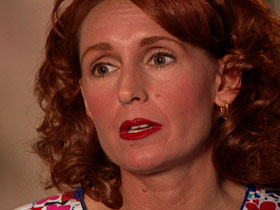 ROLLIN: Nicole Lewis is a nurse who works with Dr. Nelson.

Ms. LEWIS: We will be back in a little while. OK?

ROLLIN: One way to fix this situation is for Alzheimer’s patients to have both a living will and a health care power of attorney, which protects you from treatment at the end of life you may not want.

Mr. DAVIS (talking to Ms. Gregory): Wake up. Look at me. Wake up! It’s Bobby talking to you. Wake up!

ABERNETHY: The ethical arguments also surround removing a feeding tube once it's in.  The Vatican, among others, says removal is immoral.

Alzheimer’s disease gets progressively worse and there is no known cure. After a certain point, should an Alzheimer’s patient be kept alive with a feeding tube? Many family members say, of course: they should do everything possible to prolong a loved one’s life. But some doctors say inserting a feeding tube is inhumane, because it can just prolong a vegetative state for years.