Yankl Conzen spent his life straddling different worlds. Born Peter Conzen to a Catholic family in Hamburg at the close of World War II, he was known in Jewish circles as Yankl, the Yiddish diminutive of Jacob.

Though Conzen was not Jewish, he became enamored of Jewish culture when he lived on an Israeli kibbutz in the 1960s. An accomplished amateur photographer, he later bought an apartment in Jerusalem, where he usually visited once or twice a year. After mastering modern Hebrew, he threw himself into Yiddish literature during the last decade of his life and studied at the Jewish Theological Seminary (JTS) in New York City.

When he died last summer in his native Germany at the age of 59, after spending five months in a coma brought on by a cerebral hemorrhage, his New York friends couldn’t make the funeral. As a tribute and memorial, they organized an exhibition of Conzen’s photographs at JTS.

Fittingly for a non-Jew who embraced Jewish culture and history without ever converting to the faith, the photographs focus on Purim, a holiday that plays with themes of identity and masquerade through its tradition of dressing in costume. On display at the JTS library through March 31, “Purim in Jerusalem” features 45 works from the late 1990s depicting children from the city’s Orthodox Me’ah She’arim neighborhood.

Purim, which begins March 13 at sundown and ends the following evening, commemorates the deliverance of the Jews from a plot to destroy them, as recounted in the book of Esther. On Purim, Jews listen to the Megillah, the story of Queen Esther, who worked with her adopted father Mordecai to save her people from Haman, an adviser to the Persian king. Charitable gifts and exchanges of food are also customary.

Conzen’s photographs offer an unflinching look at children in military and police uniforms, princess outfits, masks, and more traditional roles like Esther and Mordecai. Others mimic their elders with fake beards, long black coats, and wide-brimmed hats. Some are smiling, but many appear troubled. In effect, they serve as a microcosm of childhood itself, with its rapid emotional swings among fear, sadness, and happiness. 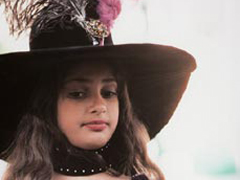 Naomi Steinberger, director of library services at JTS, was drawn to the pictures immediately, she says, “because they are not just interesting characters. They had a poignancy to them that was not necessarily joyful.”

When the library’s conservation staff matted and framed the photographs, “They said, in a very conservative way, ‘They’re all off center,'” says Steinberger. “He catches a mood. They are off center. There’s something going on here. [The children are] not the way they usually are.”

In one photo, a girl dressed in a purple bodysuit with a sequined overlay, her cheeks and temples shiny with glitter and her eyes darkly rimmed with kohl, leans into another girl similarly made up, her arms defensively up and back. The image leaves the viewer unsure whether the situation is threatening or playful.

A contemplative girl, her forehead decorated with face paint, looks away from the camera, deep in thought. Another in an elaborate purple dress, long gloves, and feather-decked hat poses with an ambivalent gaze that seems both serene and discomfited.

“This is Jewish art seen by someone who was very immersed in Jewish culture but also very conscious of the fact he had not grown up in it,” says Carol Zemel, professor of art history at York University in Toronto. Zemel first met Conzen during a Yiddish summer program at Columbia University in 1997. “There’s an exoticism and fascination to the work, but there’s also an edginess that makes it more unusual than tourist snapshots. I don’t find them innocent. There’s a bit of the grotesque in them, certainly mischievousness. At first they seem like cute pictures of children, but I think they go deeper than that.” 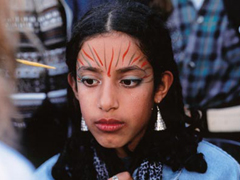 “There was something there, a hominess, a sense of power resting in morality and aesthetics rather than in force, that very much attracted Yankl to Jewish culture,” says Joshua Karlip, the rabbi of the Jewish Center of Kew Gardens Hills in Queens, who also met Conzen during the 1997 Yiddish course. “It was Yiddish that was his burning passion. His ability to speak Yiddish, the fact that he was always able to express the right word and express the right value concept, shows he penetrated the Jewish psyche in its Yiddish incarnation.”

Conzen took part several times in Yidish-vokh, a week-long event in the Berkshire Mountains of western Massachusetts where participants speak only Yiddish. In 1999, he and about 20 students from the Columbia course traveled to Tel Aviv and Jerusalem for a two-week Yiddish program. Conzen, who was independently wealthy, paid all expenses for the group.

“He sort of felt in exile in his own country because he couldn’t speak Yiddish,” says Rabbi Karlip. When Karlip visited Conzen in Berlin in 2004, Conzen made sure kosher food was in the apartment and arranged to eat on the Sabbath at a restaurant near the home of a Jewish family Karlip was dining with so he could walk his guest home at the end of the evening.

Conzen wrote a poem in Yiddish, “Mayn Bobe, Dayn Bobe” (“Your grandmother, my grandmother”), that gives expression to his unsettled sense of distance from and attraction to Yiddish life and language:

I begrudge you your grandmother,
your Jewish grandmother,
who is soaked with yidishkayt.
And a sad and sweet thread extends
from me, all the way to you.
You taste her kashe, her kugl
and at night, in your dream,
you talk to each other in Yiddish, in mame-loshn.
You and your bobe,
who sings lullabies at your mother’s cradle.
My Yiddish has no roots.
My Yiddish floats about aimlessly
it’s a made-up story.
From the cold grave my goyshe
grandmother calls out to me:
What are you babbling?
I don’t understand you!
Speak clearly! Speak German!
German you should speak

“He had somewhat different identities when he was living in Germany and when he was living in New York,” says David Fishman, a professor of Jewish history at JTS and a friend of Conzen’s. “That’s Purim. We can play with a different identity and pretend we’re someone else. These are people [in the photographs] who are very pious and serious all year long, and that they’re playing out their fantasies on this one day is so refreshing.”

At a JTS memorial service on February 26, one of Conzen’s favorite Yiddish songs, “The Miller’s Tears,” was played. “It’s a song of longing and displacement, and also a sense of fleetingness of time, that the years are going by. It’s a song that very much resonated with Yankl — the spirit trying to survive in a hostile world. He really had a sense that he was in a race against time,” says Karlip.

When Karlip gave his senior sermon in 1999 before being ordained a rabbi, Conzen gave him a Yiddish translation of the Book of Esther. “Purim was a holiday that captured his attention,” says Karlip. “It’s a holiday where boundaries are blurred. Here was this German man who loved Jewish culture and in so many ways lived as a Jew. I think Purim was a bridge area and identities could merge and switch. One culture can become another.”

Benedicta Cipolla is a writer in New York City. She reported recently for RELIGION & ETHICS NEWSWEEKLY on artist Mark Podwal.