LUCKY SEVERSON:  Some think Tim DeChristopher committed a crime and should be punished. Others think breaking the law was the right thing to do. This University of Utah student, whose only previous brush with the law consisted of two speeding tickets, hardly seems like someone who would purposely break the law.  But here he is facing prison time for committing a felony deliberately.

TIM DECHRISTOPHER (Student, University of Utah): Jail is certainly a scary thing, but I’ve been scared for my future for a long time. I think that the scariest thing for my whole generation is that we stay on the path that we’re on now. Jail is not nearly as scary as dealing with the real consequences of climate change that we’re expected to see in my lifetime.

SEVERSON: DeChristopher is a devoted environmentalist — has been since he was a kid. He’s especially worried about what man is doing to hasten global warming. He was moved to tears after speaking with noted Stanford University environmentalist Terry Root at a conference a few months ago.

Mr. DECHRISTOPHER: She said there were things we could have done in the ’80s and things we could have done in the ’90s, but I’m sorry, I think it’s too late. It shook me to the core. I literally went outside the hotel where the conference was being held, and I just cried. And I went through a very — a period of really deep despair, where it was almost like I was mourning for my future; that I was mourning for the future of us all. 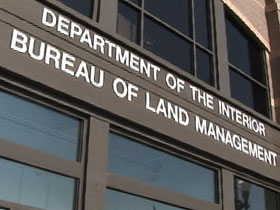 SEVERSON: He was convinced the Bush administration was auctioning off too much of the West to drilling companies. So when he heard the Bureau of Land Management, the BLM, was conducting an auction in December of last year offering leases for over 350,000 acres of public land in Utah, some of it in pristine red rock country, he decided to attend, expecting to disrupt the auction and then get kicked out.

Mr. DECHRISTOPHER: And instead I went inside. And as soon as I got inside the door an official said, “Hi.  Are you here for the auction?” And I said, “Yes, I am.” And she said, “Are you here as a bidder?” And I said, “Well, yes I am.”

SEVERSON: Dressed like a student and carrying a backpack, DeChristopher started bidding simply to drive up the prices, but before long he was winning bids.

Mr. DECHRISTOPHER: I figured I probably would go to prison, and so I had to ask myself if I could live with that. But on the other hand seeing this opportunity to protect some of this land, keep some of this oil in the ground and give us a better chance of a livable future, if I turn my back on that opportunity can I live with that? And I thought, “No.”

SEVERSON: He ended up purchasing 13 lease parcels — over 22,000 acres — for about $1.7 million until the auction was abruptly stopped.

Mr. DECHRISTOPHER: And then a BLM agent came straight over to me and showed his badge and said, “Lets go speak outside.” And then he asked me what my intentions were — whether or not I intended to pay. And I told him very clearly that my intent was to disrupt the auction, that this was an act of civil disobedience.

SEVERSON: DeChristopher’s attorney, Ron Yengich, acknowledges his client committed an act of civil disobedience, but because it’s against federal law to bid without the intention or means of paying, his client is facing three to five years in prison. 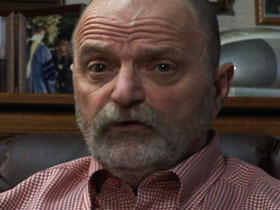 Mr. YENGICH: The idea that he is a good kid — he’s a nonviolent kid. He did it, if not on the spur of the moment, he certainly did it because of a deep-seeded belief that this country should be green.

SEVERSON: Kathleen Sgamma is director of government affairs for the Independent Petroleum Association. She says the industry has a good record when it comes to the environment, and DeChristopher did wrong and should be punished.

Ms. SGAMMA: I don’t think this rises to the level of a case where civil disobedience really is warranted. We reclaim the land. We are very protective of the environment with out activity, despite what you hear in the press and despite the rhetoric of environmental groups. So unfortunately in this case I believe the perception that oil and gas is going to come in and destroy the land has caused this person perhaps to do something to break the law.

Dr. DAVID KELLER (Professor of Philosophy and Director, Center for the Study of Ethics, Utah Valley University): Civil disobedience is ethical because the law and morality are not always the same.

SEVERSON: David Keller is a professor of philosophy and director of the Center for the Study of Ethics at Utah Valley University.

Dr. KELLER: We have the responsibility to be civil-disobedient where in situations where our complacency emboldens the power and those laws which are unjust. 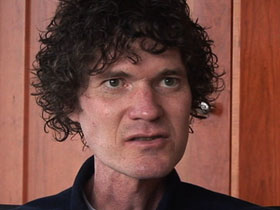 SEVERSON: Pat Shea is a former director of the BLM in the Clinton administration and is also a lawyer defending DeChristopher. He says DeChristopher’s behavior may have been illegal, but it was patterned after the actions of some of the world’s great leaders.

PAT SHEA (Attorney and Former Director, Bureau of Land Management): Just as with Thoreau or Martin Luther King or Mahatma Gandhi, he had this ability to look at this situation, deal with it in an existential way, and then come through with his actions on a principled manner, and that’s something that I think most people would love to see in their children and maybe in themselves.

SEVERSON: Attorney Yengich says civil disobedience in and of itself it not a defense.

Mr. YENGICH: But the primary defense would be what lawyers would call the “choice of evils” defense, and that’s an historic defense about someone who is basically protesting a government action, and they are saying that I did this, even if it may be technically against the law, because there is a greater evil out there.

SEVERSON: One of the concerns expressed by critics was how near some of the leases were to national parks. In fact, national park officials were so concerned they had asked the BLM to delay the auction. Ten of the parcels DeChristopher won were located near Arches National Park in southern Utah.

Mr. SHEA: I think that they were trying to push through in the Bush administration as many energy leases as they possibly could. So there were a number of commercial energy companies that had an interest to get as much as they could before the curtain came down and there was a new administration. 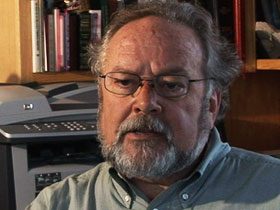 SEVERSON: Kathleen Sgamma’s association represents many of those energy companies, and she says they are performing a valuable service with little impact on the environment.

Mr. KELLER: That’s certainly one of the benefits of civil disobedience — bringing attention and stimulating public discourse, and in the case of Tim DeChristopher, I do think that it is beneficial that we are having a discussion in Utah about whether he is a terrorist or not, a saboteur, an exemplary citizen, a criminal — or the charges should be brought against him or not. All this is healthy for a democracy.

SEVERSON: What makes civil disobedience ethically acceptable and when is it not?

Mr. DECHRISTOPHER: I think when it’s nonviolent, first off, and non-destructive is one of the things that make it ethical.

SEVERSON: DeChristopher says he would never think of destroying property or vandalizing equipment to stop actions he thinks are illegal. Attorney Yengich says that, above all, civil disobedience must be done in a civil way.

Mr. YENGICH: We’ve got to be careful, and I guess this is why we say when we talk about doing acts of civil disobedience that they’ve got to be done with respect to everyone. And maybe, maybe if the government rules against you, then you have to take the punishment as part of the process, yeah.

SEVERSON: As of now, the Obama administration has withdrawn those leases offered in December. Now Tim DeChristopher is waiting to find out how this will affect the case against him.

Tim DeChristopher is a devoted environmentalist who purposely broke the law in an attempt to save land in Utah. Some believe that since he committed a crime, he should be punished. Others think breaking the law was the right thing to do in this situation.