BOB ABERNETHY, anchor: Bernard Madoff’s scheme was devastating to his victims, and so were the decisions made by many others in the financial world who helped cause a global recession. President Obama spoke this week of the need to change the culture that permitted the meltdown:

President BARACK OBAMA: “…a situation where greed, excessive compensation, excessive risk taking have all made us vulnerable and left us holding the bag.” 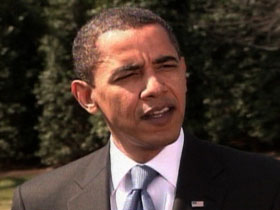 ABERNETHY: We want to pursue the moral issues of the meltdown with David Miller who teaches business ethics and directs the Faith and Work Initiative at Princeton University, after a career in corporate finance. His most recent book is “God at Work.”

David, welcome. Let’s begin with the enormous gap in pay between the richest few and the average employee. Is that difference in your judgment fundamentally unfair?

Dr. DAVID MILLER (Director, Princeton University Faith & Work Initiative): It’s a great question. In fact, the final exam topic I’ve given my students in the business ethics class is this: “Is executive compensation just or just obscene?” In some cases multiples of 350 times the lowest paid employee is outrageous and not just, not moral. But there are cases when people have added value to society, to their organization; created jobs; dealt in highly risky industries in prudent and responsible ways, and we should reward those people handily. But, indeed, there are some egregious examples, particularly those who get paid for it in non-performance.

ABERNETHY: And the consequences of that for young people, bright young people coming into the workforce? You’ve talked about that.

Dr. MILLER: Yeah, I think there’s a bit of a shift. People going to college and they’re bright and excited. They want to go out and change the world and make a contribution, and then they get lured to Wall Street. Indeed, I’ve been there myself, so I understand the attraction — the competition, the high salaries. But maybe this is a chance for people to rethink — that they ought to become teachers or dentists or scientists or technologists and use their great intellect and skills in ways to create value for society other than through financial engineering. I don’t want to minimize financial engineering, but there are other great ways that some of our minds have not been looking at over the past decade or two.

ABERNETHY: And President Obama has been talking this week, this past week about precisely that — some kind of change in the corporate culture, the business culture. What would that look like? 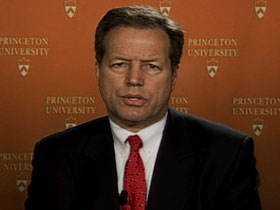 Dr. MILLER: Well, it’s such an important issue — how can we have a culture, a corporate culture that accents character, that accents the common good and not just earnings per share or a penny more per share per quarter? That’s a new culture. Is it possible that companies can make a decent profit — create wealth, create jobs, provide goods and services for society and maybe even be a moral community to develop its people? I think it can, but it will take leadership that’s committed to a new vision.

ABERNETHY: And when a corporation has enormous power, such power that if it messes up it can hurt the entire country and perhaps the entire world? Should that corporation have a special degree of regulation?

Dr. MILLER: I’m reluctant to pick out or single a particular corporation, but certainly, and we’ve done it historically, certain industries—the energy industry, the communication industry—some are so big and so important that we do regulate them. I don’t know yet if the problem with our current financial meltdown is that we need new regulation or that the existing regulators didn’t do their job — the SEC, the ratings agencies, the actuarial firms. A lot of people could of caught this and didn’t. Certainly people need to do their existing jobs better as far as oversight is concerned. Whether we need new regulation — the jury’s out on that.

ABERNETHY: You, as I said, you used to work in the financial business. What do your friends there, the friends that you have who’ve worked there — what do they tell you about what went wrong; how they feel about it; what they might have done wrong?

Dr. MILLER: Yeah, I work with a group up in Greenwich, Connecticut—we were known as the hedge-fund capital of the world—a group called Greenwich Leadership for people trying to connect their faith and their work and their morals and their values. Some people feel a bit beleaguered by the current situation, because they love their job and they’re good at it, and they are trying to do it in a moral, ethical way and create liquidity and creative instruments for companies. Others, however, realize they’ve bought into something. They’ve almost become addicted to the power and the money. One friend who recently was laid off by AIG, is part of their troubles, privately said he felt that he had made his company his false idol, if you will—that work had become, in his company that he is very proud of actually, had become a false idol, and he was now trying to reorient his life to have balance where faith, family, and other priorities, including his work, would have the right balance, the right perspective

ABERNETHY: David Miller of Princeton University, many thanks.

David Miller, a business ethics professor at Princeton University, discusses the moral issues of how we treat the very wealthy during a financial crisis.