BOB ABERNETHY, anchor:  This weekend of Easter Sunday (April 12) for Western Christians we have a profile coming up of an inspiring Christian musician.  We also have a “Belief and Practice” segment on chanting in Eastern Orthodox churches, where this is Palm Sunday.  Because of differing church calendars, Eastern Orthodox Easter — Pascha — is next week (April 19).

Our guide to Orthodox chanting was Emily Lowe, a member of the choir at the Holy Cross Antiochian Orthodox Church in Linthicum, Maryland.  She told us not only about chanting, but also about her personal experience as a singer of the Eastern Orthodox conviction that worship brings change.

EMILY LOWE (Choir, Holy Cross Antiochian Orthodox Church, singing):  Glory to the Father and to the Son and to the Holy Spirit. 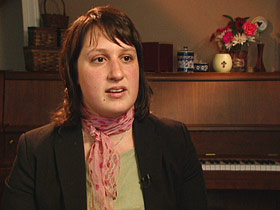 The Orthodox Church is unique in modern times, having a completely sung liturgy. Everything is sung from the very beginning to the end.

In Orthodoxy, the music is not sacred.  The words are sacred.  The music is really meant to fit the text.  So when we talk about heaven, the voice goes up, and when you talk about hell or Hades or sin, it goes down.  For instance (singing), “The company of the angels was amazed when they beheld the number among the dead.”

For instance (singing), “Rejoice O Bethany.”  Rejoice O Bethany — it’s a beautiful hymn, and it’s very dear to the heart of our Arabic parishioners — (singing) — “God came to thee; God came to thee.”  That little flourish at the end (singing “la la la la”), very unusual and very otherworldly sounding, and that’s kind of — that’s the impression that people get.  They might hear 20 things when they walk into an Orthodox church, but that’s what they’re going to take away.  They’re going to go, “Whoa, I remember that.  That was really unusual.” 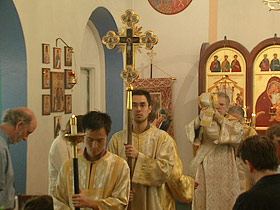 I converted about 12 years ago.  I was 16, and my family converted together.  It was initially my father’s decision.  He said, “I think this is the place for us to be. This is where God’s calling us, and this is really the fullest expression of the Christian faith.”

One thing about Orthodoxy is that it really demands change — and expects change. It expects that you will grow spiritually, that you won’t just be the same person that you were the week before or the month before.

From a personal standpoint, I never had a very good voice before we became Orthodox.  I believe that I found my voice in Orthodox music — that I didn’t have it in Protestant music or in secular music.

When people say, “Oh, you did such a wonderful job,” I feel like telling them it wasn’t me, because it really wasn’t.  It doesn’t feel like me when I chant.  I’m thinking about God and expressing the words the best that I can.