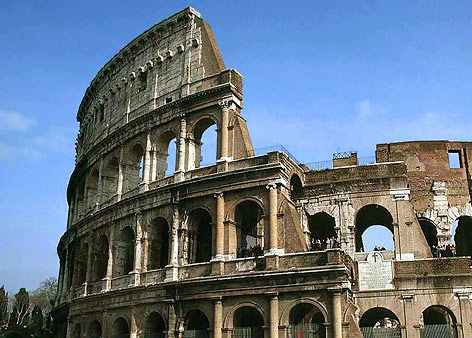 Over the past decade, every time a convicted person receives a stay of execution or a government abolishes the death penalty Roman officials change the Colosseum’s night illumination from white to gold.

It happened in December 2007 when New Jersey abolished the death penalty. It happened again this March when Governor Bill Richardson signed a bill to repeal the death penalty, making New Mexico the 15th US state to do so, according to the Death Penalty Information Center.

The special lighting was recently repeated on April 15, when Richardson and other New Mexico representatives, including Archbishop Michael Sheehan of Santa Fe, were honored at a Colosseum ceremony marking the state’s repeal. Richardson also met with Pope Benedict XVI and spoke at a news conference in Rome organized by the Sant’Egidio Community, an international lay Catholic organization opposed to capital punishment.

Richardson, who is a Democrat, a Catholic, one of the most prominent Hispanic politicians in the US, and a one-time supporter of the death penalty, told the Associated Press in February he was struggling with his position but his views on the death penalty had “softened.” He pointed to the work of the Roman Catholic Church against capital punishment, indicating that discussions with Archbishop Sheehan had influenced his own considerations.

For many death penalty opponents, New Mexico’s repeal was the result of years of hard work. The bill was first introduced 12 years ago, but it always faced challenges in the senate’s judiciary committee. “It was heartbreaking,” says the Rev. Dr. Holly Beaumont, a Disciples of Christ minister and legislative advocate for the New Mexico Conference of Churches. She represents the conference on the New Mexico Coalition to Repeal the Death Penalty.

Over the years faith-based death penalty opponents in New Mexico remained resolute, says Beaumont. “We weren’t going away, and the legislature knew that we would be back again.” She attributes their ultimate success to the multi-layered nature of the coalition, a collaboration of faith communities, the families of murder victims, Death Row exonerees, and other “people of conscience.” The coalition focused on reaching and educating those who had not yet made up their minds about capital punishment and pointed its advocacy efforts directly at the Roundhouse, New Mexico’s state capitol building and the home of its legislature.

In addition to New Mexico, a number of other states around the country have been dealing with death penalty repeal this year. A coalition of religious leaders, lawyers, and the families of murder victims is supporting passage of a pending bill to abolish the death penalty in Colorado, where this month the House of Representatives voted down capital punishment by a one-vote margin, and lawmakers say they will use the money saved (estimated at about $1.4 million per death penalty case) to solve hundreds of “cold” murder cases. The Colorado bill now heads to the state Senate, where it is expected to pass.

New Hampshire and Kansas have also considered anti-death penalty legislation this year. In New Hampshire, the House voted to end capital punishment, but the governor has said he will veto any repeal. In Kansas, where repeal was advocated primarily as a way to save money, the effort stopped short of a vote and the issue is scheduled for more study. According to the Wichita Eagle, each death penalty case costs an average of 70 percent more than each non-capital case. The paper also suggests that Kansans will be watching to see how nuanced the stand on capital punishment held by US Senator Sam Brownback, a Republican and a Methodist covert to Roman Catholicism, will be in his coming bid for governor.

In a recent vote Montana state senators supported a plan to replace the death penalty with life in prison with no parole. But at the end of March the judiciary committee of Montana’s House of Representatives rejected the proposed abolition bill. The prospect of wrongful executions of innocent people and the expense of capital legal procedures were both major factors for those who supported the bill. According to Republican Senator Roy Brown, a pro-life Catholic and recent candidate for governor, supporting a ban on the death penalty was consistent with his anti-abortion stance. But Republican judiciary committee vice-chairman Ken Peterson, a Mormon who opposed repeal, said the Book of Mormon and “eight books in the Old Testament” support the death penalty.

All of these efforts to repeal the death penalty seem to be getting a boost from the current economic crisis and are evidence of renewed interest in the argument that the death penalty costs considerably more than sentencing murderers to life in prison. Many legislators seem especially interested in financial arguments this year. In Maryland, for example, an Urban Institute study estimated that the average cost to taxpayers for reaching a single death sentence is $3 million, about $1.9 million more than the cost of a non-death penalty case.

Still, Maryland Governor Martin O’Malley, a Catholic, urged the state Senate to repeal the death penalty outright on moral grounds, characterizing capital punishment as “an issue that touches the very soul of who we are as a republic, who we are as a people” and as “one of the defining moral quandaries of our times.” He called on lawmakers to consider the “higher things” on which our “free and diverse republic was founded” and asked the legislators: “Will we be a society guided by the fundamental civil and human rights bestowed on humankind by God?”

But Maryland lawmakers amended the repeal bill and decided instead to make the state’s death penalty statute among the most restrictive in the nation, limiting capital cases to those with DNA or biological evidence, a videotaped confession, or a videotape linking the suspect to a homicide. Even though the Maryland House of Delegates appeared ready to end capital punishment entirely, O’Malley urged them to accept the restrictions and “the innocence reform bill” because, as Maryland Citizens Against State Executions (CASE) concluded, “it moves our state in the direction of more justice,” and it will save lives.

Nearly half of CASE Maryland’s member organizations are religious groups, including Quakers, Catholics, Methodists, Presbyterians, and ecumenical ministries. In addition to sermon suggestions, the group’s Web site includes an open letter to pastors, clergy, and congregational leaders making the case for abolition of the death penalty in light of the Christian faith: “Christians of all faith denominations have long held that the death penalty violates the sanctity of human life, eliminates the opportunity for redemption, and its application is not consonant with the example of Jesus’ forgiveness of injustice.”

Indeed, one of the strategies of the successful repeal movement in New Mexico was also to concentrate on themes of restoration and restitution rather than retribution. Supporters emphasized that passing the repeal bill offered the opportunity for killers to repent of their actions and eventually achieve some sort of reconciliation.

New Mexico’s repeal legislation will take effect on July 1. During the 2010 legislative session, the New Mexico Coalition to Repeal the Death Penalty now says it will focus its efforts on support for the education of children who have had a parent murdered and increased funding to the New Mexico Crime Victims Reparation Commission for services to families of murder victims, among other issues. Future steps also include a bill that provides restitution to the families of murder victims.

While Beaumont acknowledges the role the current economic crisis played in swaying New Mexico legislators this year, she still stresses the importance of trying to “change the world view” of defenders of the death penalty, asking them questions and engaging them in conversation that will get at “when was the last time you changed your mind about some deep ethical issue, and what was it that caused you to change your mind?”

“You will never convert someone you hold in contempt,” says Beaumont, who regrets the misuse of Scriptures and the lack of what she calls “good biblical interpretation” in the death penalty debate. “We’ve done so much damage that people aren’t listening anymore,” she says. “They do not want to hear Scriptures that enlighten the world we live in because they are used to hearing Scriptures that have been used as a weapon rather than to empower and guide.”

But it may be that, in a recession, money will trump moral argument as states continue considering repeal of the death penalty. As the Boston Globe recently editorialized, “Almost every state is facing a deficit, and getting smart about corrections budgets is an unexpected side benefit. Abolitionists will take whatever argument they can.” It went on, however, to reassert the more conventional arguments against capital punishment: “The death penalty is not a deterrent to most deadly crimes. It is applied unevenly. It places the United States among the world’s most brutal regimes. And there are 130 other reasons: the 130 death-row inmates who were exonerated by new evidence. Their deaths would have carried an awful price tag.”

Despite all the arguments—economic, biblical, or otherwise—for repeal, and increasing attention to death penalty abolition in legislatures across the country, it still needs to be noted that the state of Texas, long the nation’s leader in executions, continues on pace this year to execute perhaps more than twice as many criminals as in 2008, when 18 Death Row inmates were put to death.

Elaine de Leon, an intern at Religion & Ethics NewsWeekly from January-April 2009, is receiving a Master’s degree in Theological Studies in May from Wesley Theological Seminary in Washington, DC.