BOB ABERNETHY, anchor: We have a Lucky Severson report now on the divisions in one of the most prominent places of worship in the country—Riverside Church in New York. It’s affiliated with both the American Baptist Churches and the United Church of Christ and was built by John D. Rockefeller, Jr. in the late 1920s for its first and much admired senior pastor, Harry Emerson Fosdick. Riverside became widely known for its great preaching, liberal theology, interracial congregation, and commitment to social justice. But now it’s also known for a bitter controversy surrounding its new senior minister, Brad Braxton.

UNIDENTIFIED MINISTER (performing a blessing): Dear God, the God of Abraham, Isaac and Jacob, we now bring this servant of God, this man of God before you.

LUCKY SEVERSON: It has become an occasion worthy of note when the Riverside Church installs a new senior pastor. His name is Brad Braxton, and he has come a long way from his humble beginnings as the son of a Baptist preacher in rural Virginia.

Rev. BRAXTON: Pastoral ministry is a wonderful vocation. The opportunity to guide a community of faith amid its joys and sorrows is a significant and high calling.

SEVERSON: Riverside spans the blocks between the ivy-covered walls of Columbia University and the largely African-American Harlem neighborhood. Jennifer Hoult discovered Riverside when she was attending nearby Barnard College and has been coming to services for over 20 years. 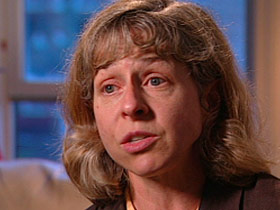 JENNIFER HOULT (Member, Riverside Church): We have had some of the most extraordinary preachers leading this church. I mean Fosdick, Bill Coffin, Jim Forbes — these are extraordinary gentlemen in the clergy, and brilliant theologians and brilliant preachers, I can add.

SEVERSON: Dr. Braxton seems well prepared for the job. He’s a Rhodes Scholar, has a PhD in New Testament studies, and was a religion professor at Vanderbilt. Betty Davis says it’s the kind of resume that stood out among the 200 applicants for the job. She has been a member here for 19 years and was on the selection committee.

BETTY DAVIS (Member, Riverside Church): And what impressed me most about Dr. Braxton was, first of all, his deep spirituality combined with his masterful knowledge. So he really stood out. His energy stood out. He came prepared.

SEVERSON: It seems like a perfect fit. So why, on the day of his installation, did the new senior pastor speak about fear within the congregation?

Rev. BRAXTON (preaching to congregation): Fear not. Fear not. I’m going to preach it until the Holy Ghost tells me to stop.

SEVERSON: He is speaking of the fear some in the congregation have about their new senior minister. His selection has proved controversial, and division within the church is an issue he has not shied away from.

Rev. BRAXTON (speaking to congregation): Move the mountain of distrust and animosity in this congregation by speaking the truth in love.

Ms. DAVIS: As soon as his name was announced, the attacks started. One of the things that some people are afraid of is that the church will turn black. And, you know, I really resent that.

SEVERSON: Betty Davis says Dr. Braxton’s predecessor, Dr. James Forbes, a world-class preacher, also black, also suffered congregational harping, and that the elephant in the room people aren’t talking about is racism. Lois and David Carey have attended Riverside for over 35 years and have seen the church’s membership shift from predominately white to predominately black. 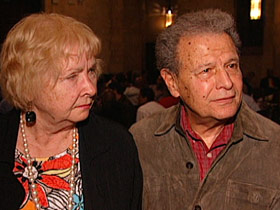 DAVID CAREY (Member, Riverside Church): I feel that Dr. Braxton is getting a holdover from Dr. Forbes, who went through the same thing he’s going through. Only he was there taking it for 20 years.

SEVERSON: Racism have anything to do with it?

Rev. BRAXTON: I’m obviously dealing with, as did Dr. Forbes, some of the issues of what it means to guide an institution of this magnitude when this institution, like the United States of America, is still wrestling with the great hold that racism has on this country.

SEVERSON: But Jennifer Hoult says her problem with Dr. Braxton is not about color.

Rev. BRAXTON (preaching to congregation): Listen again to a portion of James, chapter 3.

SEVERSON: Braxton denies that he is changing the theology and says he has written articles critical of fundamentalism.

Rev. BRAXTON: I must say as a theologian it is laughable to me that someone would consider me a fundamentalist. My thinking on Scripture, my support of gay marriage, I mean, you roll it out, there is no way, shape, or form that I am a fundamentalist.

SEVERSON: But Braxton’s evangelical preaching, his focus on Scripture, and his leadership style has made some of the congregation ill at ease. 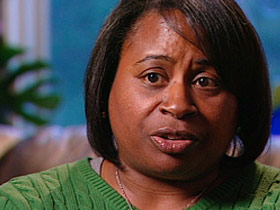 DIANA SOLOMON-GLOVER (Member, Riverside Church): What troubles me the most is that I feel the direction of the church with the new leadership is — has strayed or is straying from the mission of the church, which is open, affirming, and inclusive, interracial, interdenominational, and international.

SEVERSON: Diana Solomon-Glover is in the Riverside choir, has a master’s degree in voice, and works with children with special needs. She’s been a member over 20 years and says Riverside is no stranger to controversy and contentiousness.

Ms. SOLOMON-GLOVER: I look at it as a laboratory experiment. This is the place where we find out if people of varying backgrounds and faiths can actually come together and figure out how to be one people.

SEVERSON: But, she says, the experiment does not seem to be working very well. Riverside has long been known for its concern with diversity and social justice. Braxton agrees he may bring a new take on those issues, but pushes back at critics who think he is not committed to the church’s longstanding mission.

Rev. BRAXTON: I just think that’s patently false, and I think as a pastor, though, it’s born, again, out of fear. What I believe we are actually trying to do in our best moments is to suggest that if in fact we are going to be who we are — that is, a Christian congregation — we must take seriously Jesus and Scripture. Those are non-negotiables for Christian congregations.

SEVERSON: It’s not just theological concerns that Braxton faces. Solomon-Glover was among four church members who filed suit over what they alleged was a violation of Riverside’s bylaws. Among their claims was that Braxton’s compensation package included a $250,000 salary, a housing allowance, and other benefits totaling over $600,000. The church says in reality that package is actually closer to $460,000 and is comparable to that of other leaders of large churches in New York City. 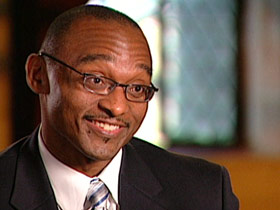 Rev. BRAXTON: What my family and I were simply trying to do was to respond to a significant calling and one that had significant burdens and liabilities associated with it, and I think it was sensationalized in a way that’s very unfortunate.

UNIDENTIFIED MAN (handing Rev. Braxton a bouquet of flowers): We love you so much. We appreciate you.

SEVERSON: There’s no doubt that many members are quite fond of the new senior pastor, and he of them. But the congenial atmosphere apparently does not extend throughout the congregation, and his critics argue there is a substantial voice of dissent.

Ms. HOULT: What’s happening right now at Riverside is contentious, hateful. You know, not only do we go and get called names, but we get screamed at by groups of people out of control. There’s no effort by Dr. Braxton to rein it in.

SEVERSON: In a recent Sunday sermon entitled “Speaking in Tongues,” Dr. Braxton appeared to be calling out his detractors on what he called fearful and mean tongues.

Rev. BRAXTON (preaching to congregation): Some days we speak in merciful tongues, other days in mean tongues. We all speak in tongues, and we all one day will have to give an account to God for the kind of tongues we used when dealing with other people.

SEVERSON: The one area of agreement we found among most everyone we spoke with is there is still a lot of healing to be done on both sides. Dr. Braxton says he is hopeful.

SEVERSON: While Dr. Braxton keeps preaching, it is still unclear where Riverside will go from here. Both he and his divided congregation share a hope that the church will continue to stand out, not just as the tallest church in the US, but as a beacon for mainline Protestants everywhere.