5For we do not preach ourselves, but Jesus Christ as Lord, and ourselves as your servants for Jesus’ sake. 6For God, who said, “Let light shine out of darkness, made his light shine in our hearts to give us the light of the knowledge of the glory of God in the face of Christ. 7But we have this treasure in jars of clay to show that this extraordinary power belongs to God and does not come from us. 8We are afflicted in every way, but not crushed; perplexed, but not driven to despair; 9persecuted, but not forsaken; struck down, but not destroyed. 10We always carry around in our body the death of Jesus, so that the life of Jesus may also be revealed in our body. 11For we who are alive are always being given over to death for Jesus’ sake, so that his life may be revealed in our mortal body. — 2 Corinthians 4: 1-12 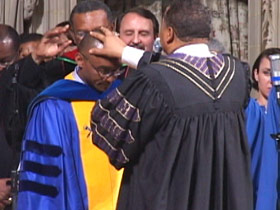 To the clergy of New York, the nation, and the world, to the parishioners of Riverside Church, to Dr. Brad Braxton and your lovely family, and to this great company of disciples and friends.

What a grand day. What a spectacular high note for American Christianity. Once again, Riverside makes history. A great church installs a great pastor with the promise of many great returns for all.

Although we gather to install a new pastor who is a preacher, a scholar, and a Renaissance man, this is not about him alone. This is about us. What kind of church will we become together with this leader? What unimagined possibilities will spring from this great confluence of spirit, talent, intelligence and hope? This is your day, Riverside Church. And because you have been a leader of American Christianity, it is a great day for Christ’s church. It is a great day for the nation and for the global, interfaith community. Another virtuoso of the word and the spirit has joined the ranks of God’s Riverside trombones.

Riverside, how do you it?

You have always selected large personalities, anointed Renaissance men. The Riverside tradition contains a veritable hall of faith of great souls who have nurtured Christian vitality and devotion.

Fosdick, Coffin, Forbes—all left their indelible marks on this place. They filled this great hall with their big voices, contagious laughter, prophetic imagination, and pastoral love. They called forth something from the people of Riverside that transformed this grey gothic cathedral into a community of warmth, worship, and wonder.

They spoke and presidents paused. They practiced the radical love ethic of Jesus and often they left the rest of us behind. We were not ready for such radical discipleship. But onward they led us, reminding us of C.S. Lewis’s observation that “the Christian faith has not been tried and found wanting. It has been found difficult and left untried.”

They were Christian statesmen who embodied the best of American Christianity. But they were also prime ministers and ambassadors of the faith to other spiritual traditions. They taught Christians to find common ground with other seekers and believers.

At this moment in history, America needs to emulate Riverside’s tradition of interfaith collaboration and respect.

As I say this I think of that marvelous place, Córdoba, Spain. In its history I find a warning for the church of today. Cordoba flourished under the Romans, then passed to the Visigoths (572) and later the Moors (711). Under the Umayyad dynasty it became the seat (756-1031) of an independent emirate which included most of Muslim Spain. The city was then one of the greatest and wealthiest in Europe and renowned as a center of Muslim and Jewish culture and admired for its architectural glories—notably, the great mosque. This construction of the mosque began in the 8th century and became one of the largest in Europe and the finest of all Muslim monuments. But by the 1560s Christians had retaken the region and destroyed thousands of mosques. Amidst their breathless demolition of all things non-Christian, they came to La Mezquita (the great mosque). It was a masterpiece adorned by 900 horseshoe-shaped arches of onyx, marble, jasper, and granite. The red and white color of the arches resembles candy canes for as far as the eye can see.

But they destroyed a large part of it and built a cathedral right in middle of it. The juxtaposition of two architectures, two traditions fused and crushed together. It is one of the most stunning sights I have ever seen, and I urge you to visit. Ironically, as Christian intolerance for diversity grew, only this mosque was preserved because it had become a church and a symbol of Christian triumphalism. Proud of their victory, the builders awaited the approval of the Holy Roman Emperor. But when Charles V visited and observed, he recoiled and declared, “You have destroyed something unique to make way for something commonplace.” They had replaced the magnificent with the mediocre.

The church has always been at its worst when it has destroyed the unique to make place for the commonplace.

Contemporary examples are abundant. In recent years, we have witnessed the strange and sad career of the American church in the public square. Too often, the church has drifted from its core mission. It has experienced an identity crisis, at times becoming little more than an instrument of the state or a political party or an economic system. The magnificent has been subverted by the mundane.

Or consider prayer: Pascal said that God has instituted prayer so as to confer upon man the dignity of being a cause. How often have we transformed prayer, the soul’s magnificent leap into the arms of God, into selfish bargaining for personal health, wealth, and success?

Or preaching: In the life of Jesus, preaching was a means of saving lives through mass communication. But in recent years, preaching has been downgraded into a shrill, sharp weapon used by petty men to promote arrogant piety, intolerance, and blind patriotism.

But not only has the church drifted from its mission; certain forces in the culture have seduced it with offers of power, money, and status. Political operatives have utilized church rolls to enlist Christians for unholy political agendas.

It is here that the culture needs to collide with Christ, here that we need to revisit Paul’s testimony from Corinthians. He declares “we preach not ourselves.” This faith, this holy drama which has given meaning to our lives is from God and not of our making. And as we preach and worship and sing and steward resources and make decisions, we do so as earthen vessels or jars of clay. God’s treasure exists in each of us imperfect vessels. We are not perfect, no matter how polished we appear. We are clay jars, we are fragile, and we break when we’re dropped.

In the words of one sage, “There is so much good in the worst of us and so much bad in the best of us that it hardly behooves any of us to talk about the rest of us.” But look again. In the middle of this passage Paul startles us with something that sounds like a preacher singing the blues: “We are afflicted in every way, but not crushed; perplexed, but not driven to despair; persecuted, but not forsaken; struck down, but not destroyed.”

A contemporary bluesman might hear Paul and respond, “If it wasn’t for bad luck, you wouldn’t have any luck at all.”

But in the face of our own despair, and confronting the systems of this world that seek to rent or buy us, we must stand with the theologian Karl Barth who said that on every page of the Bible there is one word for this world’s power systems. That word is “no.” The good news is “no, you cannot have my soul.”

No, you cannot destroy the church of Jesus Christ. No, you may cause confusion but you cannot rend asunder that which God has joined together.

Afflicted in every way, yes, but no, not crushed.

Perplexed yes, but no, not driven to despair.

Persecuted yes, but no, not forsaken.

Cast down yes, but no, not destroyed.

For a church that has said yes to the culture for too many years, the church must again learn to say no. Just say no.

But here and now I declare that Riverside and Dr. Braxton can help us restore the fading magnificence of Christian faith once again.

As you all know, Dr. King stood in this pulpit in April 1967, one year before his tragic assassination. King once said, “This hour in history needs a dedicated circle of transformed nonconformists. The saving of our world from pending doom will come not from the actions of a conforming majority, but from the creative maladjustment of a transformed minority.”

America needs a renaissance of faith, and here it can begin.

Here the world can find a piety that does not shrink from the revelations of science and honest doubt. Here we can find a place of hospitality that knows no boundaries.

Here we may hear music that will lift the human spirit.

Here in this religious public square, this global town hall, we may encounter those who are different and find that we are so much the same.

It will not be easy, and sometimes, Dr. Braxton, you may feel like the songwriter who said, “I’ve seen the lightning flash, and I’ve heard the thunder roll. I’ve felt sin’s dashers trying to conquer my soul, but I heard the voice of Jesus saying still to fight on. He promised never to leave me, never to leave me alone.”