FRED DE SAM LAZARO, guest anchor: Extraordinary scenes from Iran this week as hundreds of thousands took to the streets in protest over the disputed presidential election. Iranian officials say President Mahmoud Ahmadinejad won by a landslide. But supporters of the main opposition candidate Mir Hussein Moussavi claim the election was rigged. The Islamic Republic of Iran has a quasi-theocratic government, and the protests put new pressures on the cleric-run establishment. Kim Lawton has more. 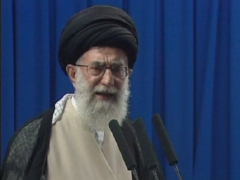 GENEIVE ABDO (Iran Analyst, The Century Foundation): It’s believed that he more or less gave — authorized — the rigging of this election.

LAWTON: Geneive Abdo is an Iran analyst at the Century Foundation. She says some of the protesters went so far as to call the Ayatollah a dictator.

Ms. ABDO: This is really, really unprecedented in Iran, where people on the streets in such great numbers are shouting against the Supreme Leader. It’s actually illegal to do that. People are imprisoned for doing that.

LAWTON: In an unusual sermon during Friday prayers, Khamenei called the election “definitive” and said there was no fraud. He urged Iranians to unite behind their Islamic government. Still, he’s ordered the Guardian Council, a body of 12 clerics and Islamic law experts, to look into the situation.

Ms. ABDO: He is considered to be a very spiritual person, and this is also something that he capitalizes on, which is one way that he makes sure that this base of religious conservative Iranians living in the provinces continue to support him.

LAWTON: But Ahmadinejad also has religious opposition, including from some clerics.

Abdo says it would be a mistake to see this as a secular-religious dispute.

LAWTON: Abdo doesn’t believe the Islamic republic is in danger of toppling, but she says some structural changes may be inevitable.