BOB ABERNETHY, anchor: It’s a common observation that one of the most important paths to peace between enemies is to learn to see others not as demonized stereotypes, but as unique human beings. When she was in the Middle East last month, Kim Lawton learned about the Parents Circle-Families Forum — Israeli Jews and Palestinian Muslims who have lost loved ones in their long conflict but have learned to replace hate with reconciliation, even friendship. Here is Kim’s special report.

KIM LAWTON: Since the establishment of the state of Israel in 1948, Palestinian refugee camps in the West Bank have been hotbeds of unrest and often scenes of angry confrontation between displaced Palestinians and Israeli soldiers. Because of the continuing military and political conflict, few Israeli civilians ever venture in. But don’t tell that to Rami Elhanan. On this day, he and his wife Nurit have come to the Dheisheh refugee camp near Bethlehem to visit their friend, Mazen Faraj. It’s is an unexpected friendship. Both have lost family members in the conflict. Yet their grief has brought them together.

MAZEN FARAJ: Today it’s our responsibility for our children and for our families to build something new. 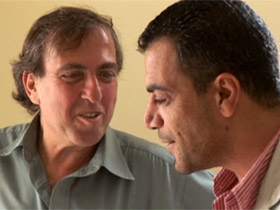 RAMI ELHANAN: We put a crack in this wall of hatred and fear that divide these two nations, and we show another way. We show another possibility. We show the ability to listen to each other’s pain, which is essential if you want to get to any kind of reconciliation.

Mr. FARAJ: This was the first room for our house.

LAWTON: Faraj has lived in Dheisheh his entire life. During the early part of his childhood, fifteen people in his family lived in this one crowded room.

Mr. ELHANAN: This is the place he’s always talking about—that you don’t need someone to hate you to teach you how to hate when you grow up in a room like this.

LAWTON: In April of 2002, there was a violent confrontation between Israeli soldiers and Palestinians fighters outside Bethlehem’s Church of the Nativity, the site where Christian tradition holds that Jesus was born. Palestinian fighters holed up in the church, and Israeli soldiers laid siege. During a lull in the fighting, Faraj’s 62-year-old father went out to Jerusalem to get groceries. He was shot and killed by Israeli soldiers.

Mr. FARAJ: He got killed in April 2002 when he was coming back from Jerusalem to Bethlehem. The Israeli soldiers, they started shooting him and without any reason. No one can kill his soul. They succeeded to kill his body, but without his soul. His soul’s still around us and give us like the power every day, how to keep going in our lives. 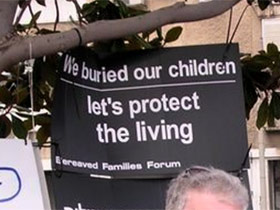 LAWTON: But there is great pain on the Israeli side as well. Elhanan had 14-year-old daughter, Smadar. Of four children, she was the only daughter, and the family had called her “the princess.” On September 4, 1997, the first day of school, Smadar went to a popular shopping area in Jerusalem.

Mr. ELHANAN: And she went down the street with her girlfriends to buy new books for the new year. Two suicide bombers blew themselves up, killing five people that day, including three little girls. One of them was my 14-year-old Smadar.

LAWTON: Elhanan says he was overwhelmed by anger and despair.

Mr. ELHANAN: It took me almost a year to understand who I am, to try to recover, and to understand that I have to choose a way for myself and translate these feelings of anger and despair into something constructive and create some hope out of it. And I joined the Parents Circle and I found a meaning for my life.

LAWTON: The Parents Circle-Families Forum was launched in 1995 as a way to bring bereaved Israelis and Palestinians together. The group now has several hundred participants who’ve lost immediate family members because of the violence in this region. Organizers believe it’s the only project of its kind in an area where conflict is still ongoing. The nonprofit group sponsors face-to-face dialogue meetings for bereaved family members and public lectures about reconciliation. 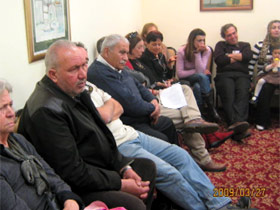 LAWTON: Faraj, who was dealing with his own feelings of anger and revenge, went to one Parents Circle meeting where Elhanan spoke.

Mr. FARAJ: And it was this man talking about his suffering and his pain, too. But I told him, “What do you know about suffering and pain? You just live in Jerusalem. ou are Israeli, you are the occupier, you are everything.” And then he starts to talk about his daughter, and then really I found out that, whoa, it’s the same pain.

Mr. ELHANAN: He’s the only guy in the world that makes me laugh.

LAWTON: Faraj couldn’t believe that Elhanan was willing to visit him in the refugee camp. They built a deep mutual respect. 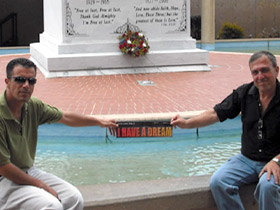 Mr. ELHANAN: What he’s doing needs a lot of guts, and his ability to face the world, tell his truths after all the things that he’s been through, I think it’s admirable, and I really respect him for it.

Mr. ELHANAN: We use this enormous respect that the two societies have for people who paid the highest price possible to convey this message, to convey the message of dialogue, of reconciliation, of peace.

LAWTON: Elhanan and Faraj have given more than 1,000 joint lectures in Palestinian and Israeli schools. They say most of the kids have no idea that Palestinians and Israelis can be friends.

Mr. ELHANAN: If there is only one kid at the end of the class who nods his head with acceptance to this message, we saved one drop of blood. According to Judaism, this is the whole world.

LAWTON: The Parents Circle is nonsectarian, but is supported by several Muslim, Christian, and Jewish groups. In 2008, Catholic Relief Services brought Faraj and Elhanan on a speaking tour across the United States. 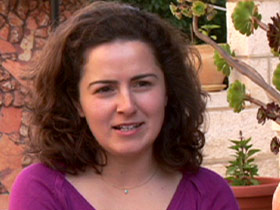 BURCU MUNYAS (Program Manager, Catholic Relief Services): They are giving a message of hope in the midst of hopelessness in the Holy Land. So we thought that this would be a strong message to bring to our US Catholic audiences.

LAWTON: For their part, Elhanan and Faraj try to keep the focus on relationship, not religion.

Mr. FARAJ: It’s the important things that we don’t want to make this conflict like a religion conflict.

LAWTON: Their work isn’t always easy. Both men have received sometimes strong criticism from within their respective communities.

Mr. ELHANAN: People tell me that I’m a traitor or a — but I think more people are impressed by my ability to translate the pain into hope.

Mr. FARAJ: I really believe in what I’m doing and — but not all the people they really accept that, but anyway, if you believe in something you have to continue.

LAWTON: Parents Circle supporters hope these relationships can be a model for others, which they believe will help further the political peace process.

Mr. FARAJ: We have a different culture, a different religion, and different, also, conditions on the ground, too. So how we can find a way? This the problem. It’s not about that’s it, I found the solution for the conflict. No. But the first step, we have to know each other.

Mr. ELHANAN: I devote my life to go everywhere possible to tell the very simple truth that we are not doomed. It’s not our destiny to keep on killing each other, and we can stop it by talking to one another — that simple.

LAWTON: Simple in theory, much more elusive to work out. But they hope their relationship proves it is possible. I’m Kim Lawton in the West Bank.