BOB ABERNETHY: We have a story about the art of making a stained glass window, an art that enriched cathedrals long ago and is still very much alive today. Bob Faw has a report on a stained glass artist in Florida who talks about how a window is made — and why. 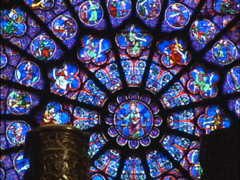 BOB FAW: In his Orlando, Florida studio, Jim Piercey, along with a handful of skilled artisans, carries on a 1,500-year-old tradition: creating — indeed celebrating — with color and glass not just beautiful stained glass windows but something more.

JIM PIERCEY (Stained Glass Artist): People have told me that my windows have helped them come closer to God, and if that’s what my windows do, then I consider the windows a success.

FAW: Stained glass — that is glass which has been painted then fired, which has graced the great cathedrals and private chapels — stained glass enriches an inner life, said one historian, with its own richness. Since 1981, Jim Piercey has completed nearly 400 works of stained glass, from a chapel in a wooded retreat to a Sunday school in a community started by Walt Disney, to this spectacular rose window in St Michael’s Episcopal Church in Orlando.

Reverend ROGER HAMILTON (Rector, St. Michael’s Episcopal Church): The objective, of course, in all things is to glorify God, but also to use it as a teaching vessel.

FAW: So many biblical stories in these windows — some well known, others less so — that every week Father Hamilton brings pre-schoolers here to study.

Rev. HAMILTON: We see, for example, also that wonderful story of Rahab lowering the spies of Israel out of Jericho and saving their lives.

FAW: To be successful, Jim Piercey says a stained glass window must fit with the personality of its church. But according to art historian Richard Gross, stained class which truly succeeds can do far more.

RICHARD GROSS (Stained Glass Association of America): If the stained glass is well designed and well executed, it’s going to lift your mind to God and to provide a way to encounter God and to grow in spirituality and understanding of the Christian faith. 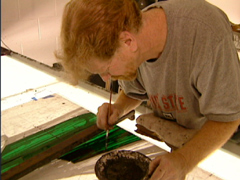 FAW: The process of making stained glass is painstaking, even tedious. For Jim Piercey it begins at the drafting table, making a “cartoon.”

FAW: Much, of course, depends on the glass itself. Piercey’s is all hand-blown in Germany, selected not just for its color but for whether it will transmit light directly or spread it.

Mr. PIERCEY: But this glass is totally transparent. This glass is translucent. This is really good to use if you want to obscure a view like a parking lot or a McDonald’s across the street from the church.

FAW: From the glass that’s selected, every piece is sectioned and numbered to match a corresponding number on the drawing, or cartoon. The glass then carefully painted.

Mr. PIERCEY: This glass is being stained. These are actually called glass-painter stains.

FAW: Then into a furnace, or kiln, heated precisely to 1,250 degrees, where paint fuses onto the glass.

Mr. PIERCEY: Once this glass comes out of the kiln and is cooled, that’s permanent. I mean, it’s there for 800 years.

FAW: Later, as he’s done for the last 58 years, Helmut Schardt glazes the panel using pliable lead strips to piece the sections of glass together.

Mr. PIERCEY: The lead is shaped like an “H,” and it has channels on either side. The channels receive the glass.

FAW: Finally the panels are covered with sawdust, a mild abrasive, and are buffed or polished to a brilliant sheen. 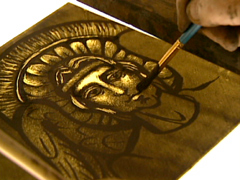 FAW: Completed, Piercey’s stained glass does more than dazzle. At Holy Cross Lutheran Church in Lake Mary, Florida, parishioners asked him to create a dove — not descending as in most church windows, but ascending.

FAW: What Piercey has done here, says Hoyer, is to encourage worship.

Pastor HOYER: And this is where I like to pray. I like to sit right in the very center where I can see all of the glass, and the presence of God comes to me in that way. For me personally it’s just a great worship experience.

FAW: In all his stained glass there are similarities, each very labor-intensive and time-consuming. But each window is unique, and while some symbols are traditional — a lion for the Apostle Mark, an ox for Luke — those doves are another matter. Jim Piercey has done hundreds of them, and each one is different.

Mr. PIERCEY: You can depict a dove like it’s almost like a photograph, or you can abstract a dove to where you can barely tell that it’s a dove. While they’re thinking about that dove, what that dove is doing to them is taking their mind away from the economy, from political situations. It just gives them a brief moment in time where they can contemplate something greater than they are.

FAW: All this from what began as a hobby for a 62-year-old former high school biology and chemistry teacher who was raised as a rock-ribbed Methodist and who will tell you that though he is unaffiliated with any denomination he, like his work, has evolved spiritually.

(to Piercey): You said your windows allow people to have access to something greater than themselves. 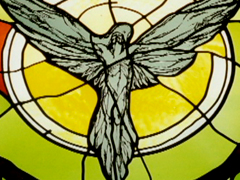 FAW: That’s the way you see what you do?

Mr. PIERCEY: I would say a lot of my work is spiritual. I’m spiritual, because I’m not preaching, you know, I’m not proselytizing. What I’m trying to do is interpret what their faith says.

FAW: You see the windows as being, almost fulfilling a priestly function, I gather?

Mr. PIERCEY: For a lot of artists, liturgical artists, stained glass or sculptures or tapestries, it’s their ministry.

FAW: Yes, it is enormously expensive, and lead, so essential here, is widely considered an environmental hazard. But those who uphold the tradition say the practice of stained glass is flourishing now and that it always will.

Mr. GROSS: People want to surround themselves with beauty, so just as churches will continue to have all sorts of religious art, stained glass will be a major part of that.

FAW: And if stained glass no longer holds the same exalted role that it held in the Middle Ages, both then and now it continues to teach, to inspire, to sooth, even to look beyond.

Mr. PIERCEY: That sunlight comes through those colors with all the texture and the striations and seeds and reams of stained glass. Nothing matches it in beauty.

FAW: Especially in the loving hands of someone for whom all this is more than just pieces of glass.

For RELIGION & ETHICS NEWS WEEKLY, this is Bob Faw in Orlando, Florida.

FAITH, HOPE, AND LIGHT: THE ART OF THE STAINED GLASS WINDOW by Yvette M. Chin STAINED GLASS: FROM ITS ORIGINS TO THE PRESENT by Virginia Chieffo Raguin