TIM O’BRIEN, anchor: Music and religion have some deep and common roots, and some of the world’s greatest musicians have taken their inspiration from a higher power.  Jazz musicians, too, like the legendary Dave Brubeck—still performing at age 88. Our reporter Bob Faw takes a look at Brubeck the man, some of his music, and the faith that makes it all happen.

BOB FAW: For nearly six decades, Dave Brubeck has been dazzling listeners worldwide. With his unique, inventive style, he has become a jazz immortal. What is less known, and just as remarkable, is that for much of that time, Brubeck has also composed religious music like “The Commandments,” which he recorded for the Milken Archive of American Jewish Music. In his religious scores, Brubeck achieves what he cannot achieve in jazz.

DAVE BRUBECK: When I write a piece, a sacred piece, I’m looking hard and trying to discover what I’m about, and what my parents were about and the world is about. 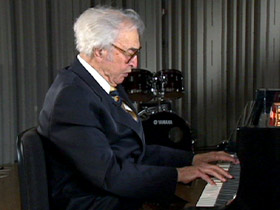 FAW: Brubeck says his service in World War II convinced him “something should be done musically to strengthen man’s knowledge of God.” In his choral work “Gates of Justice,” also recorded for the Milken Archive of American Jewish Music, he pleads for brotherhood and invokes the words of Dr. Martin Luther King Jr.

Soloists singing from “Gates of Justice”: ”If we don’t live together as brothers, we will die.”

FAW: In “The Commandments,” Brubeck’s message is strictly biblical.

Chorus singing from “The Commandments”: “Keep my commandments.”

FAW: His masterwork, performed here by the Russian National Chorus, in Moscow: 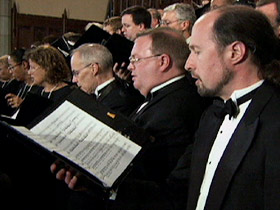 FAW: Brubeck’s classic is a Mass which Brubeck wrote at the request of a Catholic organization and entitled “To Hope: A Celebration.”

BRUBECK: The priest said, “Dave, I want people to be happy. I’m tired of people coming up for Communion with sad looks on their faces when it should be the happiest day of their week. So will you make it rhythmic and kind of feeling of something to make people move up the aisle, maybe swinging a little.”

FAW: Which explains why, in the midst of something reverential, Brubeck’s quartet launches into toe-tapping, rollicking jazz. For Dave Brubeck, jazz not only embraces, it also enhances religion.

FAW (to Dave Brubeck): How does the jazz magnify the religious message?

BRUBECK: Well, it would go back to the spirituals and the gospel singing that is so wonderful, so rhythmic and so great in certain churches, and you reach that audience if you have that gospel feeling.

FAW: Sometimes, says Brubeck, the music shapes the text. Sometimes, he says, it’s just the opposite. 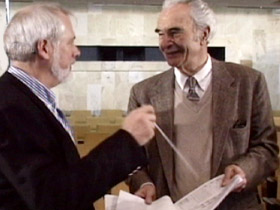 (to Brubeck) I heard you at one point say “my basic approach is to sing the text until something seems right.”

BRUBECK: Yeah, that’s it: “All my hope, all my hope is in you, oh Lord, you are my rock and my strength.”

FAW: As for those lyrics, it turns out that’s the realm of Dave Brubeck’s wife.

“God’s love made visible.” So that’s the way it finished.

FAW: Iola Brubeck, his wife of nearly 63 years (he calls her “the brains of the outfit”), chooses the texts for most of his religious scores.

IOLA BRUBECK: After I catch on to what he’s after, then I start reading and thinking about, well, what could apply? He thinks very musically. I tend to think more in forms of the narrative.

FAW: Have you ever had occasion to say, “Ah, dear, this isn’t quite working. We ought to go another direction”? Would you ever say that to the great Dave Brubeck? 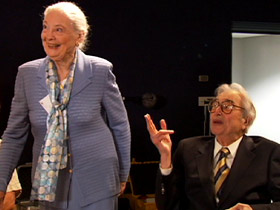 IOLA BRUBECK: I don’t think I’ve ever said we should go in another direction. I think I have been bold enough to say, you know, I just don’t think this is quite saying what you want to say.

FAW: Sometimes, though, even a wifely intervention isn’t enough. Listen to Brubeck’s haunting “Our Father” in “To Hope”:

Soloist: Deliver us from evil.”

FAW: All this, says Brubeck, was composed in a dream.

Soloist: “In your mercy , keep us free.“

BRUBECK: But I did dream it that night, and it turned out pretty good. 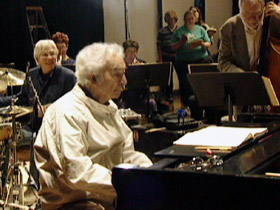 FAW: And is it true that after you had the dream and after you wrote it down you then decided to become a Catholic?

BRUBECK: Yeah, I figured somebody’s trying to tell me something, and go with the flow.

FAW: Whatever the source, whatever the musical framework, this living legend always tries, he says, to convey the same message: love your enemies.

BRUBECK: You go by all kinds of churches, and they don’t seem to know what Christ was trying to tell us.

FAW: You think it’s a very simple message, what he was trying to tell us?

BRUBECK: No, it’s profound. Probably the most profound thing in the Bible is “love your enemies, do good to those who hate you.” This is what, to me, is the essence of Christianity. 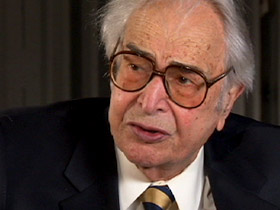 FAW: And the essence of the 88-year-old Brubeck, though slowed recently by illness, is that he is still improvising, still composing.

BRUBECK: I didn’t play it that way when you asked me because my hands don’t work.

FAW: Yeah, but your mind still does.

FAW: Because what Dave Brubeck has learned is that while jazz can energize, even thrill, his religious music can transform.

FAW: You have found music to be a vehicle to communicate God’s command to love one another more deeply. That’s really what it comes down to, isn’t it?

FAW: You do that through your music.

FAW: Through it all his wife says Brubeck has grown, musically and spiritually. In part, he says, because when the composition does succeed, there is nothing quite like it.

BRUBECK: You have a certain idea of what you wrote should sound like. And sometimes it doesn’t sound that good, and sometimes if you’ve got a great orchestra and great conductor, it sounds better than you ever thought it could sound. And that’s when you want to jump and holler and say, “Yeah, man!”

FAW: Dave Brubeck, taking jazz back to its roots, to church. For Religion & Ethics NewsWeekly, this is Bob Faw in Washington, DC.