TIM O’BRIEN, anchor: The issue of gay marriage is on the agenda as the US Episcopal Church holds its once-every-three-years General Convention in Anaheim, California.  For years, Episcopalians have been deeply divided over homosexuality.  One proposal being debated at this meeting would allow Episcopal churches to conduct same-sex weddings in the six states that have legalized gay marriage.  Currently, most mainline denominations do not officially allow same-sex weddings.  But the changing legal environment is adding new pressure.  Kim Lawton has our report. 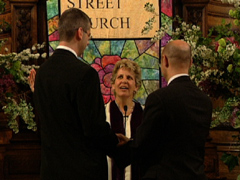 KIM LAWTON: Boston’s historic Church of the Covenant has been an important place for Anne Crane and Sarah Perreault. The lesbian couple had their first date there in the late 1970s, and by the time Massachusetts legalized same-sex marriage the two had been active members for more than 25 years, so a church wedding seemed the obvious choice.

SARAH PERREAULT: In particular we wanted to be married at our home church with our community and our family and friends.

LAWTON: But it was complicated. Church of the Covenant is dually aligned with two mainline denominations: the United Church of Christ and the Presbyterian Church (USA).  And while the UCC has no problem marrying same-sex couples, it’s against national Presbyterian policy.

ANNE CRANE: Well, it’s painful to know that the church that I’ve been a part of all my life does not recognize our relationship and our marriage as being a legitimate marriage.

LAWTON:  Church of the Covenant worked it out so that a retired UCC minister conducted the ceremony, and the Presbyterian side of the church officially stayed out of it.  Crane and Perreault say their wedding was beautiful and meaningful, but not quite everything they would have planned.

PERREAULT:  I felt badly because there were people that we would have liked to include in our ceremony who could not participate because they were ordained Presbyterian clergy. There was a real loss there.

LAWTON:  For decades, mainline denominations have been wrestling over issues surrounding homosexuality: whether to ordain gay clergy and whether to recognize–and bless same-sex unions. Now that six states have legalized gay marriage, those battles are taking on a new urgency. Some church members are pushing the denominations to reassess their policies, while others are fighting to hold the line.

Mark Tooley is president of the Institute on Religion and Democracy, an advocacy group that supports conservative positions within mainline denominations. 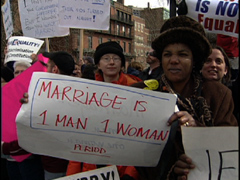 MARK TOOLEY:  The church shouldn’t just go along with what the wider society demands of it. But the church is ideally supposed to be faithful to timeless teachings that have been presented to the church through its Scripture and through its traditions.

LAWTON: Currently, while the Unitarians and the UCC conduct gay marriages, mainline Protestant denominations as a rule don’t officially allow it. Clergy who participate in same-sex weddings could face church trials and even risk being defrocked.

Minister:  “I hereby pronounce you husband and husband…”

TOOLEY:  Traditionalists within those churches will strive to help to ensure there is as much fidelity as possible, by the clergy to the official teachings.

LAWTON: Harding says he believes what he’s doing is the right thing, so he’s willing to risk any repercussions.

HARDING: We could be defrocked. I would be now sitting here as Mr. Harding instead of Reverend Harding. And in Massachusetts, a lay person can go for a day to the state house and get permission to officiate at a marriage. So I’d still be able to do it, only I just wouldn’t be a pastor anymore.

LAWTON: At Church of the Covenant, interim minister Jennifer Wegter-McNelly is an ordained Presbyterian pastor. She says her congregation has been put in a difficult position of trying to maintain support for gay members while still respecting the national denomination. 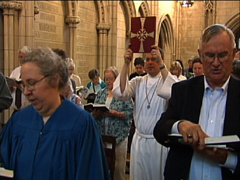 REV. JENNIFER WEGTER-MCNELLY: We have a long history and we’re very active, and so I think there is a lot of really thoughtful hard conversation about how do we be prophetic and remain faithful and connected to the churches that are our larger community?

LAWTON: So far, they’ve been able to do that by keeping same-sex weddings solely under the jurisdiction of the UCC part of their church. Other congregations don’t have that option. Episcopal clergy also can’t conduct gay marriages. In an effort to be even-handed, many Massachusetts Episcopal churches aren’t doing any weddings, gay or straight. Instead, Reverend Pam Werntz at Boston’s Emmanuel Episcopal Church says they provide a blessing for couples who are married by the state.

LAWTON: The compromise may have helped circumvent some of the denominational difficulties, but Werntz says it was still painful for many members.

WERNTZ:  There were people that left the church in feeling a lot of sorrow and betrayal that the Episcopal Church couldn’t move as fast as I think it needed to move when same-sex marriage was legalized.

REV. REINE ABELE: Churches generally are not the leading edge of cultural change in our society. They are often not the engine but the caboose.

LAWTON: But despite the new activism, mainline clergy continue to be conflicted over the issue, and those who support gay marriages still appear to be in the minority. 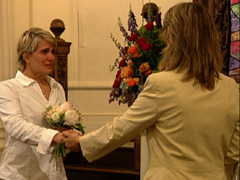 LAWTON: According to a recent survey by Public Religion Research, mainline clergy are generally more supportive of gay rights than Americans as a whole. But that doesn’t hold true when it comes to same-sex marriage. Only a third of mainline clergy support gay marriage. That number is just about the same for Americans overall.

TOOLEY: Often people in wider society are very surprised to learn that the mainline churches don’t already accept same sex marriage, because typically these churches, at least for the last 50, 60 years or more have been on the liberal side of social issues. But they have hung back on the marriage issue.

LAWTON: For many, it’s an issue of basic theology.

TOOLEY: Typically for Jews and Christians, marriage is a metaphor for faithfulness between God and his people and once you begin to redefine what marriage is you ultimately start to redefine who God is and that obviously and understandably is difficult for Christians and Jews.

LAWTON: In the Presbyterian Church (USA), Reverend Mary Holder Naegeli is among those urging the denomination to maintain its stand.

LAWTON: But others advocate a different interpretation of the Bible.

WEGTER-MCNELLY: Our call to be inclusive of all people comes from scripture.  It comes from faithfulness to God, it comes from understanding that all people are made in the image of God and it’s essential to support people in their relationships, to bless them and support them and nurture them.

LAWTON: For Wegter-McNelly, the issue also comes down to her pastoral responsibilities to the people in her pews.

WEGTER-MCNELLY:  Here gay marriage isn’t an abstract issue. It’s not a political issue.  It’s very much an issue of the people of the congregation being in community together. To tell people that this community that is the compass for your life is not going to bless and support you in your intimate relationship is kind of an impossibility.

LAWTON: But supporters of traditional marriage say pastors also have a responsibility to their faith and to the wider church.

HOLDER NAEGELI: Why would I, a representative of God, help people make permanent with a vow, I take marriage vows very seriously, but with a vow to make permanent then, seal something that God wouldn’t agree with?

LAWTON: As they celebrate their fifth wedding anniversary, Anne Crane and Sarah Perreault are glad their church wedding worked out.

CRANE: It’s a liberating feeling, and it’s enabled me and us to just, to live our lives honestly and openly, and many people don’t have that opportunity and have to continue living a lie. And that’s the sad thing.

Minister: Those whom God has joined together, let no one put asunder.  Amen.

LAWTON: But given the conflicts within the mainline churches, the situation is not likely to change any time soon.