DEBORAH POTTER, guest anchor: In Los Angeles, a group of inner-city clergy, many of them inspired by veterans of the civil rights movement, are taking their ministries out of the pulpit and into the streets. Instead of only preaching to save souls, they are returning to activism: confronting homelessness, unemployment, and violence. Lucky Severson reports.

Speaker at Bryant Temple AME Church service: It’s time to break the silence. It’s time to draw a line saying “this far and no farther.” 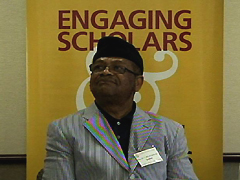 LUCKY SEVERSON, correspondent: This is the Bryant Temple African Methodist Episcopal Church in South Central Los Angeles. The music will move you, but this is not a celebration. It’s a service dedicated to bringing an end to the needless deaths of all the boys who will never become men.

REV. EUGENE WILLIAMS (CEO and National Director, Regional Congregations and Neighborhood Organizations Training Center, speaking at service): Our young people have been dying in the streets day and night where we have hidden our light under a bushel.

SEVERSON: How many kids have been killed, say, in the last year?

REV. WILLIAMS: About a hundred.

SEVERSON: Pastor Eugene Williams managed to survive his inner-city childhood, but the odds are worse today. He says it’s partly because too many African-American churches have lost their way.

SEVERSON: So that’s why Williams and other activist preachers started a program called Passing the Mantle, now in its fourth year at the University of Southern California.  It’s a nine-day course where pastors, now known as the Old Lions, teach younger pastors, African American and Latino, how to get civically engaged in the real-life drama of inner city Los Angeles.

(to Rev. Cecil Murray): Did you ever think that you would be called an Old Lion? 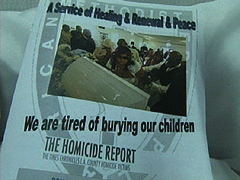 SEVERSON: Cecil “Chip” Murray retired at 75 as the pastor of the First African Methodist Episcopal Church of Los Angeles, which was the largest AME church in the country. He could preach hellfire and brimstone, but he was more concerned about social issues like homelessness, jobs, violence, and hunger.

SEVERSON: Pastor Mark Whitlock is a co-director of Passing the Mantle. He says because of Rev. Murray he turned his life around, so he knows a pastor can make a difference, even with kids society deems beyond hope.

REV. MARK WHITLOCK (Director of Community Initiatives, USC Center for Religion and Civic Culture and Pastor, Christ Our Redeemer AME Church, Irvine, Calif.): I would probably be one of those people you would be afraid of in the community, yeah, sold some product that were illegal and did some things that I’m not very proud of.

SEVERSON: Now, as pastor of Christ Our Redeemer AME Church, he sees how much more difficult it is today for inner-city kids to break free of their environment. He was once one of those kids. The need for black churches to get involved, he says, is urgent.

REV. MURRAY: To say we are here to save souls and that’s all—you can’t save souls in isolation. It’s a totality of heart, soul, mind, strength, family, environment. It is essentially your environment. 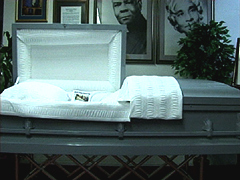 SEVERSON: Pastor Murray earned his reputation as an Old Lion as a leader of the civil rights movement in California from the very beginning. Despite his quiet, humble demeanor, he has won many battles and concessions from the city and state, including one that the police would no longer hold suspects in choke-holds.

Pastor J. Alfred Smith is another Old Lion who led the civil rights movement in northern California. He is senior pastor emeritus of the Allen Temple Baptist Church in Oakland.

SEVERSON: And after they led the struggle against segregation and police brutality and eventually forced Congress to pass civil rights legislation, it was black pastors who calmed the fury of the LA race riots in 1992. Then things changed. Many black churches began focusing less on social justice issues and more on saving souls and preaching the gospel of prosperity, which teaches that the faithful will be rewarded with material blessings.

REV. MURRAY: I would just admonish those who preach prosperity to remember that the one who founded the Christian church had one pair of shoes.

REV. WHITLOCK: We believe Christ came to set the captives free, to bring sight to the blind, to clothe the naked, to find housing for those who are looking for housing. That’s the work of the church. We must return back to the values that made the black church a true success.

REV. WILLIAMS (speaking at Bryant Temple AME Church service): And we came by here to tell you young people that we’re sorry. We’re sorry because we left you to fend for yourselves. 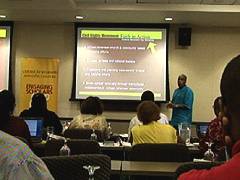 SEVERSON: Outside the chapel at the special healing service, there was an empty casket. No one needed to ask why. They all know someone.

Woman praying at service: Bring, Heavenly Father, what only you can give…

SEVERSON: A few days earlier, someone dumped the body of a young man who had been shot in the head just a few hundred yards from the church.

SEVERSON: Most parents in South Central LA are as caring and loving as parents everywhere, but with far greater obstacles. There are few jobs, few public parks to get the kids off the streets, poor schools, and not enough role models. There are now twice as many Latinos as African Americans, but people of all races are starting to realize they’re in this together.

REV. MURRAY: If under the skin all people are kin, if all human beings have an area that can be approached, then we need to find what that area is and go to it, because the problems are not going to fix themselves.

SEVERSON: There are some signs of progress. Inner city pastors have managed to wrangle some new affordable housing. Some of the estimated 40,000 gang members have been persuaded to try to go straight. Pastors are getting more involved. And there’s one more change on the front lines: A majority of those asking to receive the mantle are women.

Woman pastor speaking to group: …that we have to make the difference. That’s what I learned today.

REV. WILLIAMS: People are dying in the streets. We’re saying that people are engaging in risky behavior. So you’ve got to come out behind your stained glass windows and come out here and help people, because if you don’t, all of those problems are going to end up, and they are ending up, on your doorstep.

SEVERSON: They’ve heard promises of help before, promises often not kept. Now it’s the most trusted men and women in the neighborhood who are offering hope.

REV. WILLIAMS (speaking at Bryant Temple AME Church service): If we lock arms, if we continue to move and work together, we will improve the communities where we live, work, and worship. I came by here to tell you to stand on your feet, because we gonna be more better. Let’s give God some praise….

SEVERSON: So far, the Old Lions have passed the mantle to about 400 younger pastors who seem determined to do what authorities have been unable to do without them.