DEBORAH POTTER, guest anchor: Mainline denominations continue to be sharply divided over issues surrounding homosexuality, and this week (August 17-23) it was the Lutherans’ turn. Leaders of the nation’s largest Lutheran denomination voted to lift their church’s ban against noncelibate gays and lesbians in the clergy. The issues dominated debate at the Evangelical Lutheran Church in America’s biennial assembly held in Minneapolis this week. Kim Lawton has our report. 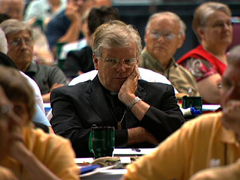 PRESIDING BISHOP MARK HANSON (Addressing 2009 Churchwide Assembly): Have no fear, we will pray!

KIM LAWTON, correspondent: They prayed for unity, but disagreements over homosexuality were clear as delegates of the Evangelical Lutheran Church in America—the ELCA—gathered in Minneapolis this week (August 17-23).

UNIDENTIFIED DELEGATE: We cannot change what is right and what is wrong.

UNIDENTIFIED DELEGATE: How about Jesus saying judge not, that you be not judged?

LAWTON: After vigorous debate, clergy and lay delegates approved a measure that allows local congregations to hire homosexual pastors who are in “lifelong, monogamous” relationships. Previously, only celibate gays and lesbians could be recognized as ELCA pastors.

LAWTON: After acknowledging his relationship with another man, Atlanta pastor Bradley Schmeling faced a church trial in 2007. He’s no longer officially recognized as an ELCA pastor, but his congregation kept him on. Schmeling says he hopes the denomination is entering a new era. 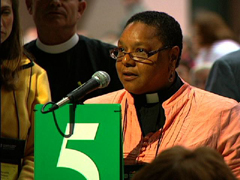 SCHMELING: Well, my dream for the ELCA would be that we could be a community that really celebrates gay, lesbian, bisexual, transgender leaders in the church—not just tolerate our presence, but genuinely celebrate the gifts that people bring to the church.

LAWTON: Many said the same standards should apply to all pastors.

REV. MARK CHAVEZ (Lutheran Coalition for Reform): And the proposals are just a flat-out rejection of what the Christian church for 2000 years, and most Christian churches today, and most believers today, still hear and believe: Don’t have sex outside of marriage. Period.

LAWTON: But supporters argued for a different interpretation of Scripture.

REV. GLADYS MOORE (New England Synod delegate): I think there are some who want to see the Word as a static book that we are to read literally, and others of us see it as a living, breathing, dynamic Word that continues to be revealed to us.

LAWTON: With nearly five million members, the ELCA is one of the largest denominations in the US. Delegates are hoping the debates won’t tear their church apart. They passed a social statement affirming that there is room in the ELCA to accommodate differing views on homosexuality—an issue, the statement said, which is “not central to our faith.”

REV. MOORE: I don’t think this is a church-dividing issue. There are some who will say that, but I’m not one who believes that.

REV. JOHNSON: I think that there will be some deep hurt, and there will be some pain, and how we move forward and deal with that as a denomination will speak volumes as to our fidelity to the word of God and to the strength of our unity.

DEBORAH POTTER: The Lutheran delegates also passed an agreement to have “full communion” with the United Methodist Church. That means the nation’s two largest mainline Protestant denominations will share ministers, missions, and other church resources. The United Methodists approved the agreement at their general conference last year.