BOB FAW, correspondent: For 900 years this has been the hallmark, indeed, the passion, of Cistercian monks—prayer seven times every day. Nearly five hours each day are devoted, says the superior of this abbey, to the solitary pursuit of friendship with God.

THE REV. BERNARD MCCOY (Superior, Cistercian Abbey): It’s really about a relationship with God, and prayer is just the word we give to the conversation and the relationship that we have with the divine person. 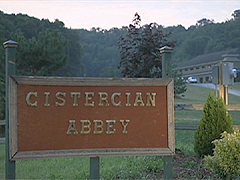 FAW: On nearly 600 remote acres in south central Wisconsin, even private time, as when Brother Stephen Treat walks the Stations of the Cross, even that time is spent, he says, lifting his mind exclusively to God.

BROTHER STEPHEN TREAT (Cistercian Abbey): The main part of our business is going into that church seven times a day and praising God and praying for the safety and well-being of the world.

FAW: Even when Father Bernard relaxes with his Spanish hotbloods Alejandro and Tinaco, or with the ordinary Bert, there is meditation.

FATHER BERNARD: Theirs is about being and about awareness, and there is a quietness to them, obviously, for the most part, so they are a very contemplative presence in our life.

FAW: The rituals, the routines here are familiar, but what sets this abbey apart is that while it keeps one foot in the 11th century, the other is firmly planted in the 21st. On the grounds nearby, with a background of Gregorian chants, is a high-powered Internet operation run by two laywomen which permits the abbey to flourish.

CINDY GRIFFITH (Co-Founder, Monk Helper Marketing and Co-Author, “Laser Monks”): We allow them to be what they were put on the planet to be—to be monks, to do good, to pray for the world.

FAW: All this began seven years ago when Father Bernard went to buy toner for his printer.

FATHER BERNARD: I said, you know, wow, this is just way too expensive for a bunch of black dust or a few squirts of ink. There has got to be a better way.

SARAH CANIGLIA (Co-Founder, Monk Helper Marketing and Co-Author, “Laser Monks”): He said come on out to Wisconsin. He said there is beer, you know, there is beer, there are brats, come on out—we’re on 600 acres—and see what you think.

SARAH CANIGLIA: I saw an opportunity to take the monks where they needed to be and to relieve—to take a business idea, the germ of an idea which he had, and turn that vision into a success.

FATHER BERNARD: It’s a wonderful symbiosis that lets us use our talents, lets them use their talents, and helps us do a lot of good work.

FAW: I would regard that as serendipitous. I gather you regard it almost as providential?

FATHER BERNARD: Both. I would call it sacred serendipity.

FAW: Now they also sell deluxe coffee, Benevolent Blends, with profits supporting families who pick the coffee beans—also chocolates, creamy caramels, jams, and jellies made in other monasteries. Sales last year were nearly five million dollars. Eighty percent of that was for expenses, but ten percent went to fund the abbey, and the remaining ten percent went to charity, from a camp for kids with HIV to Buddhists in Tibet. 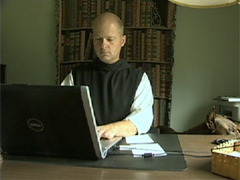 FATHER BERNARD: So we’re a for-profit whose bottom line is to not make any profit at the end of the year, because it’s all given away in some form or fashion. That’s social entrepreneurism, really, at its radical best.

FAW: Their product line also includes Benevolent Biscuits, treats for dogs prepared in the abbey kitchen, rolled, stamped, and baked by the Cistercians themselves and sampled by the abbey’s quality control officer, Ludwig, the abbey’s Doberman Pinscher.

Here no talent is kept under a basket. What Father Robert Keffer paints will someday be sold to help maintain the abbey.

THE REV. ROBERT KEFFER (Subprior, Cistercian Abbey): You work during the work hours. You stop, you go to prayer. It’s a very—regimented is the wrong word, but it is a very disciplined life. So that’s a little hard for an artist: Oh, I’ve got this great inspiration. I can’t stop and pray now.

FAW: But you have to.

FATHER ROBERT: Yes, you have to, and you most certainly can.

FAW: So here there is a balance between the rigors of monasticism and the demands of the marketplace in an abbey which is both in the world and apart.

FATHER BERNARD: We have cell phones. We have Wi-Fi. We have, you know, things like the normal world. But we know when to turn them off.

FAW: Even though that takes some getting used to, says Brother Stephen Treat, who left what he says was a satisfying job for a Quaker social service agency because he felt the need to do something more. 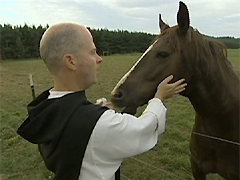 BROTHER STEPHEN: You do miss certain things, but you would be surprised with what you replace it with, that here I am in a community of six guys, that if all works out I will spend the rest of my life with them and whoever comes after, and I will be buried on that hill, and that falls into an 80-year history of this house and a 900-year history of this order.

FAW: And for those who contend this way of life, this withdrawal from the world, is ultimately selfish, Cistercians have an answer for that.

BROTHER STEPHEN: The Christian tradition understands places like this, contemplative monasteries, as these lighthouses, these beacons where people are joined together in prayer and praying on behalf of the whole world.

FAW: Theirs is a calling which appeals only to a few, but a calling which transforms those who embrace its rigors, just as being part of this community has changed a lapsed Catholic and a divorced grandmother.

CINDY GRIFFITH: Personally, I think I’m more grounded, more settled, more peaceful. The abbey has brought that kind of religious part of me that I didn’t have before I came here.

SARAH CANIGLIA: For me it’s been as much of a spiritual journey as it has all other types of journeys. It’s really brought me back into the fold in a really slow, step-by-step, peaceful way.

FAW: So here, in this oasis of serenity, seven times every day the Psalms, the chants will continue to echo.

FATHER BERNARD: In some ways we perch a little bit more lightly on this planet, and, you know, we have one foot firmly planted in the earth and another one off in the heavens.

FAW: Here, where they live both simply and smartly, having learned, as one put it, “only those who can see the invisible can accomplish the impossible.”

For Religion & Ethics NewsWeekly this is Bob Faw in Sparta, Wisconsin.