FRED DE SAM LAZARO, correspondent: Jakarta looks like any other modern Asian capital, but here, alongside the glittering office towers, you’ll also find imposing houses of worship. At the Istiqlal mosque recently, about 10,000 worshipers gathered for Friday noon prayer. It’s part of a religious revival that’s been taking place alongside a booming economy in recent decades. It is visible in mosques—and in malls. At this crowded shopping center, the most popular garment seems to be the head scarf.

INDONESIAN WOMAN: I feel ashamed, because I should have been wearing it since I was young, but at least I am wearing it now.

DE SAM LAZARO: Islam is making a comeback in Indonesia along with democracy that began 10 years ago. For years after independence from the Dutch in 1945, and then under decades of Suharto’s dictatorship, religion was officially tolerated at best.

DR. DEWI FORTUNA ANWAR (Indonesian Institute of Sciences): Islam and the traditional, customary laws were regarded as being backward and primarily blamed for, you know, the defeat for many Muslim countries under European rule, so that many of the earlier nationalist leaders, many of the educated elite, in fact, turned their back on religion, and among the younger generation there seems to be a greater willingness both to be openly religious and to be modern and educated at same times. I think maybe this is not just a search for greater spiritual anchor, but also I think it’s greater self-confidence.

DE SAM LAZARO: She and others say this growth of religious expression is spawned by the new democratic freedoms. It’s neither fundamentalist nor militant, notwithstanding recent terrorist incidents. Bombings in two Jakarta hotels killed nine people last July, and a 2002 attack in the tourist haven of Bali killed more than 200. But religion scholar Ulil Abdalla, with the liberal Islamic Youth Association, says such extremism is not widespread.

ULIL ABDALLA (Islamic Youth Association): For some people, Islam as practiced in this country is corrupted. Movies and food and, you know, lifestyle and so forth, it’s pretty much influenced by the American cultures. So when radical Islamic ideologies was introduced by some activists to Indonesia, it appealed to young people, but that’s, you know, the appeal is limited to a fringe in the society. It’s not a predominant trend.

DE SAM LAZARO: The more accurate gauge, he says, is Indonesia’s recent election, in which secular incumbent [president] Susilo Bambang Yudhoyono won easily. Islamist parties, which had surged to 40 percent of the vote in 2004, lost ground, to less than 30 percent.

ULIL ABDALLA: Some people feared that if democracy, if the democratic space is opened it will allow Islamist party to dominate the arena. That is not true.

DE SAM LAZARO: Significantly, the reaction of the Islamist and other parties after the election indicates a commitment to democracy, says Anies Baswedan, a scholar of political Islam.

ANIES BASWEDAN (Paramadina University): We have around 40 parties. Only nine were able to gain seats in the house, yet we do not see significant problems from supporters who are not having their parties in the house. Acceptance to political result, democratic result, is very important.

DE SAM LAZARO: He says Indonesians, especially the 14 percent who survive on less than a dollar a day, have much more pragmatic concerns—food prices, the economy in general, and corruption—even voters who’d like to impose stricter Islamic law or sharia.

MARTA: From what I understand about Islamic states, the people live in prosperity, and the law is enforced very strictly. Those who steal, those who are corrupt, they cut off their hand, rather than here, where people who can bribe judges and police get away with things.

DE SAM LAZARO: Yet Marta, who like many Indonesians uses just one name, voted for the secular president. So did his neighbor, Samsuddin, who praises a government initiative that’s helped the poor.

SAMSUDDIN: Number one is cash for poor families, and the second is cheap rice. We get $10 a month in cash and 15 kilos of rice. We are a Muslim family, but we are not that strict. I voted for the party that is already helping people. It doesn’t matter whether it’s Islamic or not. 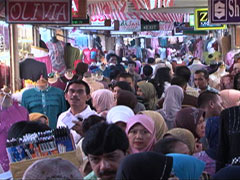 DE SAM LAZARO: That kind of sentiment has moved Islamist parties to the center.

ANIES BASWEDAN: People understand now, campaigning, that “we are Muslims, we are an Islamic party, this is a sharia platform” does not sell. People ask, “Tell me what else, tell me in reality, what will you deliver beyond the slogans?”

FAHRI HAMZAH (Member of Parliament): We don’t name it sharia, because if you name it sharia people then from beginning suspicious to see.

DE SAM LAZARO: Fahri Hamzah is a Member of Parliament with the most successful Islamist party, called Prosperity and Justice, which joined the ruling coalition government. Although it once campaigned for Islamic law and more conservative women’s attire, Hamzah says they are happy to govern by consensus in a liberal democratic framework.

DE SAM LAZARO: That interpretation might well have its roots in the history of Islam in this vast, diverse archipelago.

DR. DEWI FORTUNA ANWAR: We are used to living in differences. Indonesia is composed of islands, over 17,000 islands and over 700 different ethnic groups with different languages, different cultural traditions. Islam came to Indonesia fairly late, from 12th century up, mostly through traders and Sufi teachers. They found Indonesia already very rich layers of cultures, and to be accepted a new belief, a new religion would have to adapt to local circumstances from the beginning. I think that was the case when Hinduism came here and when Buddhism came here and then when Islam came here, when Christianity also came here. 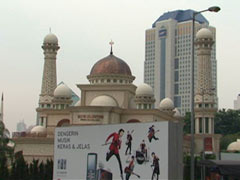 YUDI TOZA (Shop Owner): We believe in Indonesia that Islam is more modern, more moderate. People who wear the plain dress, it’s not our way.

ROSA LESTARI (Shop Clerk): It will look strange if an Indonesian woman wore that kind of plain clothes, especially nowadays. They probably think you are a terrorist’s wife.

DE SAM LAZARO: Shop owner, saleswoman, and customer told us there’s no contradiction between Islam and fashion, that the notion of a plainly dressed, fully covered woman is—foreign. Shopping here was Nur Inani, who was buying for customers in her own clothing business in the island of Sumatra.

NUR INANI: Mostly they are looking for clothes this long and this long, which is basically covering the butt and the arms. I look for the dress first, and then I will find the matching scarf, the color, the style.

DE SAM LAZARO: Terrorist incidents aside, Indonesia is enjoying a period of stability rarely seen in its independent history. Indonesians are free to choose their government, and they are free to pursue religion, and they’ve made it clear in elections that they want to pursue each separately, that is, to keep religion out of government.

For Religion & Ethics NewsWeekly, this is Fred de Sam Lazaro in Jakarta.