BOB ABERNETHY, anchor: Another gay rights issue that has divided people of faith is hate crime legislation. President Obama signed an expansion of the hate crime law that makes it a federal offense to attack people because of their sexual orientation. Some faith leaders welcomed the hate crime expansion, calling it a human rights victory. But others fear it would inhibit religious speech, even though the law explicitly says no one will be prosecuted for their beliefs or speech.

Here to examine the issue is David Kirkpatrick of the New York Times who has covered religious liberty questions. David, welcome. Why do what appear to be a fair number of religious conservatives think this new law or this extension of the law is wrong? 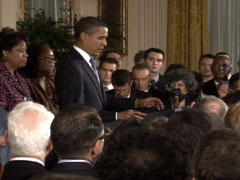 DAVID KIRKPATRICK (New York Times Staff Writer): Well, if you believe yourself to be engaged in a culture war, a part of which is about the nature of sexuality and homosexuality, then you want to convey to your children, you want to teach your children that homosexuality is a sin. It’s something to be avoided. It’s not a natural kind of behavior. And now comes along a statute that is going to say homosexuals are a kind of person worthy of not only special respect but special protection. You’re going to see that as a defeat.

ABERNETHY: But what about seeing it as a threat to free speech, even to what a pastor might say in the pulpit? Some people have said pastors could be prosecuted for preaching the biblical view of homosexuality and other things like that. What about that?

KIRKPATRICK: That’s overblown. Okay, I mean, clearly this does not suspend the First Amendment, and there’s nobody, I think, on either side of the US Senate or House of Representatives that intends to see preachers locked in jail. But we get overblown rhetoric on the left and the right, and the reason why this particular overblown rhetoric finds some purchase in the minds of people out there is because there is an element of thought involved. You know, what a hate crime does is it adds to the penalty to an aggressive or criminal act if the person who perpetrated it was motivated by a special disdain for the person they’re hitting. You know, if someone is standing outside of a bar saying “I hate gay people” and then slugs a gay person, that’s a hate crime, and it does have something to do with their reasoning and their thinking, so it’s not ludicrous to think that a kind of thought is being penalized here.

ABERNETHY: And even that it might apply to a sermon?

KIRKPATRICK: Well, that goes a little bit far, but, you know, suppose a pastor gave a sermon about how terrible sodomy is, and then later that day he happened to get into a fight with a gay man. Well, he could be in trouble.

ABERNETHY: But what about just a parishioner who heard a sermon and then went out and did something? Would that, then—would the pastor then be held responsible for that?

KIRKPATRICK: I’m not a lawyer, but that seems pretty far-fetched to me. However, on the other hand, you know, if you’re an active participant in a congregation that spends a lot of time talking about what a sin sodomy is, and then you happen to get in an altercation with a gay man, I think that that could plausibly raise questions, and if you want to, you know, if we’re going to try to be as sympathetic as we can to the people who are concerned about this, let’s look at college campuses. You know, that’s a place where, within the context of the campus, people do regulate free speech, and they do regulate hate speech, and I think that there are some people who think, well, goodness, I don’t want my son or daughter to end up at a secular college where by reading certain passages of the Bible they’re going to trigger, you know, speech codes. So they’re not—it’s not completely irrational to feel like there’s something at stake here.

ABERNETHY: David Kirkpatrick of the New York Times. Many thanks.