BOB ABERNETHY, anchor: As Congress assembles a health care reform package, a longtime expert on medical ethics writes in a recent issue of Commonweal magazine that there has been an important idea missing from the debate—the concept of the common good. The expert is Daniel Callahan, founder and now president emeritus of the Hastings Center. His new book is Taming the Beloved Beast.  He joins us from New York.

Mr. Callahan, welcome. How do you define the common good?

DANIEL CALLAHAN (Senior Researcher and President Emeritus, The Hastings Center): I mean by the common good our life together, the stranger and the neighbor, the friend we know and the person—people we don’t know. The common good I think of as essentially a social concept. Aristotle said human beings are social animals, and I think that is true, and it seems to me that as we think about our own life, either in politics or health reform, we have to think not only of ourselves and our family but also of the neighbor, the stranger, the person we don’t know, and somehow knit that together into some meaningful whole. 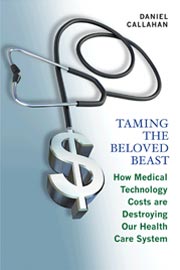 ABERNETHY: And was there a time in this country’s history when the idea of the common good was very strong, very prevalent?

CALLAHAN: Well, in a curious sense, its not like—Europe has a much stronger sense of the common good, in great part because of their wars and other terrors they have gone through. In this country I think there has been ambivalence and uncertainty about the common good. We really—freedom has been our main catchword, the main value we have gone by, justice a little bit less so. But the idea of working together for the common good is something—it certainly is come at in times of warfare, but it’s sporadic. It often doesn’t mark our common life together, and a great number of people really, I think, are just enormously ambivalent. They want to help the poor, but of course they don’t want to raise their taxes. They’d like health care reform and they see the need for cutting costs, but they don’t want to give up anything themselves. So we are very torn on the common good, I think.

ABERNETHY: Is that why it has been so difficult to put together health care reform, because nobody wants to give up anything?

CALLAHAN: That’s a very powerful part of it. Now some of it is different politics. Republicans and Democrats differ on the role of government. But it is very striking that even the Democrats, who started out talking about cost control, immediately backed down and said of course we can’t take anything away from people. But, of course, we can’t control costs unless we do, unfortunately, take some things away from people.

ABERNETHY: And that’s the idea in your new book, Taming the Beloved Beast, isn’t it, that technology, medical technology, has become so important, but also so expensive, that there have got to be some kind of limits, some kind of controls. Is that right?

CALLAHAN: Exactly right. Technology is probably the main thing that drives up health care costs in this country. Everybody loves it. Doctors love it, patients love it, and it’s part of American culture, and it’s done wonderful things. It keeps us alive longer, it keeps us healthier. Yet, at the same time, the cost of it all is beginning to really corrode, even destroy, the heath care system. It’s one of those wonderful cases of when is enough enough, and when does a good thing turn into a bad thing?

ABERNETHY: And, very quickly, are we going to get a good, in your judgment, a good health care reform?

CALLAHAN: I think we’ll get a good reform in the sense that we’ll probably see a much enlarged coverage of the uninsured, and we’ll see certain changes, improvements in health care for children and Medicaid. At the same time, we will not be able to control costs under the present bill, and I think that’s going to create enormous problems in the very immediate future.

ABERNETHY: Daniel Callahan of the Hastings Center, many thanks.