BOB ABERNETHY, anchor: Now, a special report on the rebuilding of Salt Lake City. The Church of Jesus Christ of Latter-day Saints, the Mormons, are building an enormous new downtown development—high end shops, condos, and offices. Is that emphasis on wealth and consumerism compatible with Mormon values of modesty and thrift? Does it leave any room for the poor, or for the variety that helps make up vibrant city life? Lucky Severson reports from Salt Lake City.

LUCKY SEVERSON, correspondent: By the looks of things, downtown Salt Lake City has found the pot of gold at the end of the stimulus rainbow. Where else would you find 1600 construction workers on a project so immense it will transform the core of a city? But this is not stimulus money, not even one cent of local taxpayers’ money. This project, known as City Creek Center, is funded entirely by the Church of Jesus Christ of Latter-day Saints, the Mormons, and their development partners. Stephen Goldsmith was the city planning director during the Salt Lake Olympics.

STEPHEN GOLDSMITH (Associate Professor of Architecture and Planning, University of Utah): This is unprecedented. This is the single largest private development project going on in the United States today. 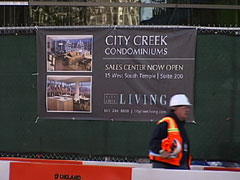 SEVERSON: When it’s completed in 2012, the new city center, directly across the street from the church’s temple, will include millions of square feet of retail and office space. Only the church knows the price tag, and they declined to be interviewed for our story, but the project’s cost is expected to top $1.5 billion, a price they’re willing to pay to transform Salt Lake City. Natalie Gochnour is chief operating officer of the Salt Lake Chamber of Commerce.

NATALIE GOCHNOUR (Chief Operating Officer, Salt Lake Chamber of Commerce): We have the headquarters of an international religion. We’ve hosted the world in the Olympics. So we want to build a world city.

SEVERSON: Outsiders often don’t know that, in the city itself, a majority of residents are not Mormon, and some locals are concerned that the diversity of a vibrant downtown will give way to a squeaky-clean Mormon enclave in City Creek Center. Daniel Darger owns the Blue Iguana Restaurant not far from Temple Square.

DANIEL DARGER (Attorney and Owner, Blue Iguana Restaurant): There’s no question in my mind it’s going to fundamentally change the nature and the whole culture of that part of downtown. I think primarily their goal is to get a lot of their members here and to gain control of not only the politics, which they already have, and the economy, which they already have, but the atmosphere of the whole downtown.

SEVERSON: Before the City Creek project got underway, not many would have thought of Salt Lake as a world city. It was losing its population to the burbs. Downtown was becoming a ghost town, and that wasn’t good for business or the church’s image. Elbert Peck is the former editor of Sunstone magazine, an independent journal for Mormon intellectuals.

ELBERT PECK (Former Editor, Sunstone Magazine): When I was a child, I remember coming downtown with my grandmother, and she’d walk all of Main Street stopping off at every little shop and every little boutique. It was a wonderful, vibrant downtown. 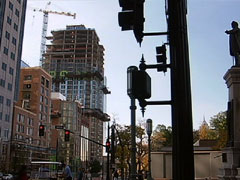 SEVERSON: But in the late ’60s, Salt Lake began to face the suburban flight that was sweeping the nation. In an effort to reverse the trend, the church developed two downtown malls on land across from Temple Square. [CORRECTION: While the church did develop the ZCMI Center, Crossroads Plaza was developed by Crossroads Plaza Associates, an investor group not affiliated with the church. The church acquired Crossroads Plaza in 2003.] Rather than revitalizing the street life, though, the enclosed malls drew shoppers into the parking garage and then sent them right back to the suburbs, leaving the rest of downtown in bad shape.

PECK: Salt Lake City was dying, and the city was becoming seedy, and image and promotion is very important to the missionary work of the church.

SEVERSON: The church is again trying to revive the streets around Temple Square, and now to get people out of their cars they’ve got TRAX, an increasingly popular light rail system that was built ten years ago. Ryan McFarland is the economic development manager for the city’s mass transit system.

RYAN MCFARLAND (Transit and Economic Development Manager, UTA): A transit-oriented development is just this. It is a walkable community that’s typically higher density and that provides for all of your needs.

SEVERSON: Strongly opposed at first, TRAX up and running is now warmly embraced, and the transit system is expanding with 70 miles of new track, some of which is federally funded. The church strongly encourages its downtown employees to use mass transit, and the new development will be serviced by two TRAX stations.

SEVERSON: From the beginning, Mormons have been pioneers in the field of city planning. Even before Joseph Smith was assassinated, they planned and built the city of Nauvoo, Illinois, which at the time rivaled the metropolis of Chicago, only Nauvoo was designed around the church’s temple, which is center to Mormon theology. Salt Lake City was designed in the same fashion. The new plan, though, is a little different. It incorporates the church’s values and old-fashioned capitalism. Jason Mathis is the executive director of the Downtown Alliance.

JASON MATHIS (Executive Director, Downtown Alliance): My sense is that right now people are pretty enthusiastic about this, and even some of the critics in the past have said, “Well, we recognize this is going to be a really good thing for our community.” 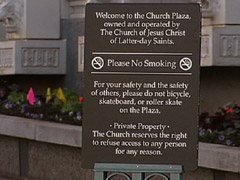 SEVERSON: It’s unlikely that a development of this magnitude would be possible in any other US city, because no one organization owns so much downtown property, and that will include satellite campuses for two church schools. As the church’s influence expands in Salt Lake City, the interests of the non-Mormon community often conflict with those of the church, creating what Stephen Goldsmith calls a “we-they” divide.

GOLDSMITH: The community needs to understand that we do have a certain Vaticanization, if you will, of this end of town. The changing demographics of Salt Lake City, just Salt Lake City by itself, really does create a “we-they.” There’s more of a “we-they” in this community than I’ve seen in my lifetime.

SEVERSON: The “we-they” divide became more pronounced a few years ago, when the church purchased property adjacent to Temple Square and converted it into a private park known as the Main Street Plaza. That controversy grew to a full boil earlier this year when two men were found kissing in the plaza and were evicted by church security guards.

GOLDSMITH: When we privatize the public way, which is the single most important thing in the city is that democratic space of streets and sidewalks—when we lose that, we begin to lose some of that democracy. Remember, this is now private property. City Creek Center will basically control time, place, and manner of anything that happens interior to that project. So if a couple who happens to be same-sex is kissing each other after buying a wedding ring, that could be a problem.

SEVERSON: Critics worry that the church’s social policies, such as abstention from alcohol, will dictate the city’s culture. Jason Mathis says Salt Lake is not Las Vegas and doesn’t want to be, but that people here genuinely want to welcome other people.

MATHIS: It’s something that we’re really paying attention to, really trying to break down those barriers. I want people who might come downtown and go to a bar to also feel perfectly comfortable experiencing Temple Square, in the way that Parisians might experience the Cathedral of Notre Dame whether they’re Catholic or not.

SEVERSON: Even though the city has a non-Mormon mayor, and non-members outnumber members, Salt Lake is surrounded by suburbs and towns that are heavily Mormon—people who will come to the new downtown and who rarely oppose what the church proposes, even when it hurts. That includes Janice Heilner. 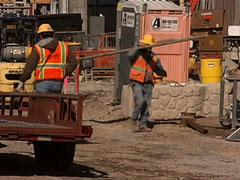 JANICE HEILNER (Store Owner): When we go to the temple, everyone takes their street clothes off. They have locker rooms and you can change into a white outfit.

SEVERSON: Janice operated a successful store across from Temple Square called Dressed In White until the church moved her to another location to make room for the City Creek project.

HEILNER: I was disappointed, but I could see the greater good in the whole thing. I know we were a casualty of the whole downtown redevelopment, but I realize that downtown needed a face lift. The only reservation is, will I be able to go back? I mean, you know, a new mall is going to cost a lot of money. I might not be able to afford the rent.

SEVERSON: Her reservation is probably realistic. City Creek, after all, is a for-profit, private development which favors national chains and allows it to bypass the affordable housing requirements of public developments. Higher end condos overlooking Temple Square could go for as high as $2 million.

PECK: They’re trying to make it pay for itself, first of all, because the church doesn’t like to put in money that it’s going to lose. You can’t fault them for that. But it’s going to be a high-end mall, and it’s going to be high-end apartments. But there needs to be addressed low-income housing in the city, that’s for sure.

SEVERSON: Stephen Goldsmith, the former director of city planning, is now an associate professor at the University of Utah who teaches a class about the ethics of shaping communities. He says he sees a disconnect between the business side of the church, which is constructing 900,000 square feet of retail space, and the values the church constantly preaches.

GOLDSMITH: Some of those values are frugality, modesty, humility, and it’s interesting to see how a temple to consumerism somehow is aligned with those values. What church do you know of that’s building retail space any place else in the world?

PECK: Within the church, within the scriptures, there’s a strong river of theology that is very anti-materialistic, and so there’s a conflict there. It’s the same conflict that Christians have from the New Testament, and Mormonism has pretty well made its peace with the modern consumer, capitalistic, materialistic society, and Mormons have to deal with that individually.

SEVERSON: There are parts of the development that almost everyone can agree on. City Creek is a green project, with green buildings, recyclable water, and even though the recession has hurt most of the country, the City Creek project has sheltered Salt Lake from the worst of it.

GOUCHNOUR: You know, people say there’s no safe harbor from this recession, but in downtown Salt Lake City there is. We’re on high ground here.

MATHIS: I think, though, the church doesn’t want to lose money on this, but I think that their motives have much more to do with being good community stewards, with creating a community that is going to last for the next hundred years.

SEVERSON: As for those who have concerns—

SEVERSON: The church has said that the money for City Creek will come from investments and not from members’ tithes. Funding for the project was reportedly set aside before construction began.

ABERNETHY: That story was a collaboration between this program and public broadcasting’s Blueprint America project.

Major support for Blueprint America is provided by: