RAFAEL PI ROMAN, correspondent: Even at the end of her short life, when it became harder and harder for her to walk, Flannery O’Connor went to Mass nearly every day at the Sacred Heart Catholic Church in Milledgeville, in central Georgia. She lived with her mother in an old plantation house surrounded by 1500 acres of pasture and woods. In her room after church she would write all morning, facing the back of a tall chest so that she would see no distractions. Her output was not massive—two short novels, two collections of short stories, a number of essays, and a lot of letters. But today many consider her one of America’s greatest writers. Since O’Connor’s death, more than 50 books have been written about her, one of them by Ralph Wood of Baylor University.

PROFESSOR RALPH WOOD (Author of Flannery O’Connor and the Christ-Haunted South): Flannery O’Connor is the only great Christian writer this nation has produced.  That is an astonishing fact. Emerson, Thoreau, Hawthorne, Melville, Twain, Emily Dickinson, Frost, Stevens: not one of them Christian, at least not orthodoxly Christian. She is a Southerner and a Catholic, she’s not at the center of American culture, and yet she is our only great Christian writer. 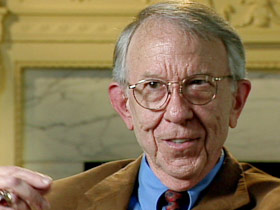 ROMAN: What makes her increasing popularity even more surprising in these secular times is the fact that O’Connor was a self-proclaimed orthodox Catholic whose subject, in her words, was “the action of grace in territory held largely by the devil.”

O’Connor was the only child in a respected and well-off family. She was fascinated by birds of all kinds, and when she was a little girl a newsreel cameraman came down to film a chicken Flannery claimed could walk backwards. Later on, her hobby centered on peacocks, a bird she saw as her personal symbol, according to her biographer, Brad Gooch.

BRAD GOOCH (Author of Flannery: A Life of Flannery O’Connor): I think she liked it because it was a comic and gawky bird, like herself. It ate her mother’s flowers and kept everyone awake all night, and then at a certain transfigurative moment tails would open, and here was all this beauty which she saw as a symbol of the way her fiction worked, and also in the Middle Ages the peacock was the symbol of Christ and the church so, you know, it all lined up for her and the peacocks.

ROMAN: As a young woman, O’Connor went to the Iowa Writers Workshop, to the exclusive Yaddo artist’s colony in Saratoga Springs, and then to New York City and Connecticut, writing all the way. Then, at the age of 25, she was forced to return home because, like her father before her, she was dying of lupus. It was back in Georgia in the 1950s that she discovered the characters for her stories. 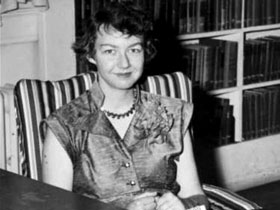 WOOD: Not the cotton belt, not the tobacco belt, but the ugly word the Bible belt, and for O’Connor that was the glory of her region. These were the emarginated people on the sidelines of southern life in small, out of the way places.

ROMAN: She wrote that her Christ-haunted characters are so cut off from orthodox Catholicism that they don’t have a guide and that they are actually involved in a do-it-yourself religion that is kind of comical, sadly comical.

WOOD: She said, look, these are my brothers and sisters. They are as unlike me as they can be when it comes to the church and its sacraments, but they are a whole of a kind of sweated gospel, a gospel that takes God and God’s world with the utmost seriousness, and therefore I’ve got to attend to them.  I cannot dismiss them, saying these are people after my own heart, and I want to write about them sympathetically.

ROMAN: Father Thomas Joseph White is a Dominican priest whose conversion to Catholicism was influenced by O’Connor’s fiction.

FATHER THOMAS JOSEPH WHITE, OP (Theology Instructor, Dominican House of Studies): You don’t have baptism, confession, and the Mass, which she says are, you know, the center of her life. You have instead odd and grotesque, historically surprising events where people encounter the grace of God. 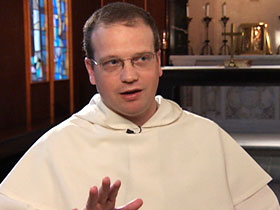 ROMAN: From these people her stories emerged. In “Wise Blood” and “The Violent Bear It Away,” and in twenty short stories, she told dark tales of murder and bigotry and madness, of a preacher of the Church without Christ who puts out his own eyes. Some have asked, is this Christian?

WOOD: She says most sins are committed by acts of immoderation, of excess, but she says there is one and only one quality that can never be sufficiently immoderate, and that is the love of God, and she saw in these backwoods, southern, I call them folk Christians more than fundamentalists, that kind of completely radical love of God in their own way.

ROMAN: Talk about the importance of grace and mystery in her work.

WOOD: Mystery does not mean for her a kind of a fuzzy, foggy, gooey something or other. It’s a very specific term for her. For her the word mystery means that which is inexhaustible in our knowledge of God, that the deeper we go in understanding who the self-declared, self-revealed God is, the more there is yet to understand, so that the greater our knowledge of God also the greater our ignorance of God, so that we know only a thumbnail of what and who God is.

ROMAN: As the civil rights movement changed attitudes and language, O’Connor was sharply criticized for using the N word in her writing. 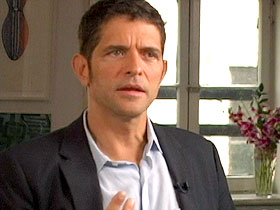 GOOCH: She couldn’t change that word because that’s the way those people speak.

WOOD: For Flannery O’Connor, race was indeed the curse of the south in the sense that it was the single-most important test which we as white Christians failed. For O’Connor, the mistreatment of black people is a violation of their being creatures made in the image of God.

ROMAN: In recent years, O’Connor has become a favorite not only of writers and scholars but of artists and entertainers of all stripes, including Bruce Springsteen, Bono, the Coen brothers, and even Conan O’Brien and the creators of the hit TV series “Lost.”

PROFESSOR BRUCE GENTRY (Editor, Flannery O’Connor Review): She always talks about waking people up to the mystery of the world, and I think that puts her in a position that is similar to a lot of people in popular culture. You know, they want to create something substantial, but they also want to do it for a popular audience.

ROMAN: In the process of writing his biography of Flannery O’Connor, Brad Gooch says he came to admire her discipline and determination, particularly during the final months of her life.

GOOCH: She was staying alive through writing, and you see it at the end of her life, where it becomes a real race with death. She’s working on stories which she keeps under her pillow in the hospital so the doctor won’t take them away from her. She’s editing one story after she’s had last rites. So all of this seems to me a very clear kind of sense that this is what’s keeping her alive, or why she’s alive.

ROMAN: O’Connor’s admirers wonder what her legacy will be in years to come. Some say that will depend on whether future readers will understand a writer who saw “the action of grace in territory held by the devil.”