Readers coming upon the work of Flannery O’Connor (1925-1964) for the first time in this first decade of the 21st century can be forgiven for not immediately recognizing her as a “Catholic novelist.” Many of her original readers in the 1950s and early 1960s did not, on first reading, or even second and third readings, know of O’Connor’s personal Catholic commitment nor read her novels and stories of so-called “backwoods prophets”’ and grotesque Southern Protestant and Pentecostal fundamentalists as exemplifying a particular Catholic sensibility. 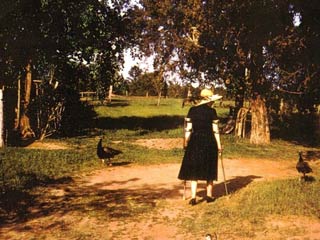 Still, readers found O’Connor brutal, broadly brushed stories compelling, and she is well embedded in the canon of both Southern fiction and most “religion and literature’’ reading lists.

But how has she fared over the past half-century?

Revisiting O’Connor after five decades, it still remains difficult to find that Catholic sensibility she and many of her admiring critics insist permeates her work, and other shortcomings—in particular the almost complete absence of attention to race and the civil rights movement that was convulsing her beloved South as she wrote some of her most powerful works—become increasingly apparent with distance. It can even be argued that the signature elements of her style—character as grotesque, gratuitous violence as the bearer of meaning—no longer shock, no longer convince.

O’Connor made her mark as one of the most original and boldest story-tellers of the mid-century South, writing two novels, two major collections of short stories, and a number of other miscellaneous stories and occasional prose. She was also a prolific letter writer and wrote numerous books reviews, principally for Roman Catholic diocesan newspapers. While mining some of the same social milieu as Faulkner—the poverty-stricken, illiterate backwoods and the small town lower-middle-class gentility—O’Connor imbued her stories and novels with religious imagery and themes drawn primarily from a corner of Protestant and Pentecostal fundamentalism, as well as pre-Vatican II Catholicism.

She had a certain contempt for both her time and her audience, believing her present was not only secular but also mired in nihilism, and considering her principal audience to be unbelievers who needed the shock of her paradigmatic and emblematic violence in order to be brought to belief. “My audience is the people who think God is dead,’’ O’Connor wrote in one letter. In her influential essay “The Fiction Writer and His Country,’’ she argued: “The novelist with Christian concerns will find in modern life distortions which are repugnant to him, and his problem will be to make these appear as distortions to an audience which is used to seeing them as natural; and he may well be forced to take ever more violent means to get his vision across to this hostile audience. When you can assume that your audience holds the same beliefs you do, you can relax a little and use more normal means of talking to it; when you have to assume that it does not, then you have to make your vision apparent by shock—to the hard of hearing you shout, and for the almost-blind you draw large and startling figures.”

O’Connor defended her approach in a 1955 letter complaining about readers who found her powerful and jarring story “A Good Man is Hard to Find’’ brutal and sarcastic for its depiction of the killing of an entire family, including a sleeping baby, by escaped convicts: “The stories are hard but they are hard because there is nothing harder or less sentimental than Christian realism.’’

But what she calls “Christian realism” seems more like the judgment of a wrathful God. It is a notion of the human situation so distorted by sin that all understanding of the orthodox Christian conception of humanity created in and retaining the image of God is absent. It was hard then and is equally difficult now for some readers to see grace announced with the point of a gun and a mass murderer as a prophet of God in waiting, or to “be on the lookout,” as O’Connor once told students before reading “A Good Man,” “for such things as the action of grace in the grandmother’s soul, and not for the dead bodies.’’

In any version of Christian realism, dead bodies count; they are not soulless plot appendages. As Joanne Halleran McMullen, in her book “Writing against God: Language as Message in the Literature of Flannery O’Connor,’’ has noted, both the central characters in this story are nameless. Neither the grandmother nor the pathological murderer is given a name. The latter, McMullen notes, is called by what he is—The Misfit—not who he is. “He has no Christian name; it is his depravity that has become specifically ‘incarnate’ in O’Connor’s world.” Grace may somehow be operating in the final gestures between the grandmother and The Misfit when she reaches out to touch him but he recoils as if bitten by a snake—a biblical symbol that is the antithesis of grace. But this seems more apparent in O’Connor’s intention than the story’s realization. In her lecture on the story, O’Connor describes The Misfit as a “prophet gone wrong” who, because of the grandmother’s touch, would become “the prophet he was meant to be.’’ But, again, the story as written provides the reader with no clue for understanding The Misfit as a prophet either gone wrong or yet-to-be. Throughout her fiction, O’Connor’s characters seem only faintly realized as human, as people with individualized souls and personalities meriting the author’s or the reader’s sympathy, compassion, or even revulsion.

O’Connor wrote before Vatican II threw open the windows of reform in Catholicism, and it would be understandable if Catholics, or other readers familiar with some of the new, more pastoral accents created by the Second Vatican Council, had difficulty recognizing O’Connor’s Catholicism. But even in the pre-conciliar church, some critics within the faith were quick to denounce O’Connor’s work. Essayist Robert O. Bowen, reviewing “The Violent Bear It Away” in 1961, was fierce: “Neither its content nor its significance is Catholic,’’ he wrote. “Beyond not being Catholic, the novel is distinctly anti-Catholic in being a thorough, point-by-point dramatic argument against Free Will, Redemption, and Divine Justice, among other aspects of Catholic thought.’’ Yet O’Connor read widely in contemporaneous Catholic thought, and much of her book reviewing, albeit mostly brief notices, concerned Catholic theology and doctrine.

To the contemporary reader, O’Connor’s fiction does, indeed, seem to eschew the notion of free will for her characters; they seem to be playing out preordained roles in a cosmic drama of divine anger and judgment. And while there are sacramental elements in her work—at least one story centers on baptism—they appear mostly as ornament, like the comparison of the sun to an elevated host during the Eucharist in “A Temple of the Holy Ghost.” In part that may be because O’Connor was concerned that her message and meaning not be transparent. While her Catholicism can be veiled, it can also leave her readers confused. In her nonfiction, O’Connor stressed the role of mystery in Catholic doctrine. “The fiction writer presents mystery through manners, grace through nature, but when he finishes there always has to be left over that sense of Mystery which cannot be accounted for by any human formula,’’ she wrote in “The Church and the Fiction Writer.’’ Too often, however, the Mystery became mystification for the reader.

Perhaps O’Connor greatest lapse, and the element that makes her fiction more of a footnote in the history of American literature than work of enduring value, is her total exclusion of the civil rights movement and the religious elements—black Protestants especially, but also white mainline Protestants and Catholics—that fueled it and that were so much a part of the texture of everyday Southern life in the period in which she was writing. It seems a curious omission for a writer of O’Connor’s sensibility, who sought to be attuned to the action of “grace through nature’’ and who boasted of being a Southern writer, a regional writer, to ignore that drama of biblical proportions being played out in her own front yard. It was a drama with many of the same elements—violence, lynching, castration, rape—that she rooted her fiction in. The critic Ralph Wood is most probably correct when he says O’Connor was no racist, but he fails to explain away her ambiguous attitudes toward African Americans and her contemptuous dismissal of efforts, especially by Northern sympathizers and others, to heed the call of the Rev. Martin Luther King Jr. to join in the struggle to dismantle segregation, in some instances by giving up their lives.

“The South is traditionally hostile to outsiders, except on her own terms,’’ O’Connor wrote in “The Catholic Novelist in the Protestant South.’’ “She is traditionally against intruders, foreigners from Chicago or New Jersey, all those who come from afar with moral energy that increases in direct proportion to the distance from home.’’ Apparently O’Connor feared that “moral energy’’ might dilute or undo the racial status quo on which Southern identity depended, believing that only time and history would resolve the race issue. In Wood’s view, racism and segregation were, for O’Connor, “a species belonging to a much deeper and more pernicious genus of evil.’’ If so, it is nowhere evident in her work.