While listening to President Obama’s State of the Union address last night, I received two phone calls. I found each call unsettling as I strained to hear each voice, humbled by circumstance, while still trying to grasp the terms, tone, and tenor of the president’s message. I hurried each call, pushed them to the side, so I could concentrate on the historic message before me.

The president spent the overwhelming majority of his address on the economy. He spoke to the heart of America, the heart of America’s concerns, and the heart of American resolve. He addressed us as middle-class Americans, people reeling from economic loss and instability, and heirs to a legacy of resiliency. As he spoke, I continued to hear the voices from the phone calls. 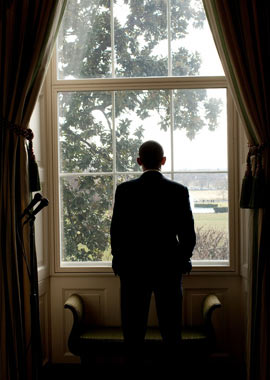 One young man called because I know his father, and his father told him I work with people coming home from prison and their families. He had been home less than 24 hours, found a place in a local shelter, and reached out for help. The other gentleman who called is a highway maintenance and construction worker who has not had steady work since 1997. A combination of battling addiction (he won, and has been sober now seven years, one day at a time) and insurance companies (who refuse to provide adequate assistance for the two on-the-job accidents which left him idled) has forced this once proud homeowner and union steward to a struggling subsistence lifestyle. Ironic how both calls came during an address that was not for them.

Second chances may be biblical, but they are not popular. The president said so last night, only he called them “bailouts.” When the second chances go to the poor, our common penchant to overlook the plight of the least of society exacerbates our dislike of the “root canal” of restoration. No, our primary economic interest is in the loss of the middle class, not the ongoing plight of those already marginalized by society.

There is hope. My two friends squeezed their way into the address when the president acknowledged that in the midst of the current economic crisis, “For those who had already known poverty, times got harder.” His call for investment in community colleges as well as “world-class education” could open doors for these two distressed voices whose letters will not be read in any presidential speech any time soon.

So the State of the Union address is really more about how a president, totally aware of our middlin’ identity, could communicate and connect, inspire and challenge a nation rightly perceiving the loss of the middle. The address reflects the ongoing rush to center of post-Reagan electoral politics. And the president is right: every day is Election Day.

In the address last night, the rush to center took a step forward—uh, wait a minute. When you are in the center, how can a step take you in any direction but left or right? Biblical religion does not deal in left, right, and center. It does not assess the horizontal plane. Rather, biblical religion assesses society in vertical terms: who’s up, who’s down, and who’s in between.

Much of society votes horizontal but thinks vertical. Our political process offers choices of left, right, and center, but our assessment of social reality often stands in the vertical middle between top and bottom, constantly looking up in aspiration to power and blaming down in eschewing policies that affect the least of these. The president is right: service, not ambition ought to be leadership’s aim. But ambition is the aim of the American middle, which can never settle for being anything less than number one. Why should leadership be any different?

The painful awareness that those on the margins, for whom Hebrew and Christian scriptures declare God’s special affinity, could only peek through the cracks of the address says something more about us than it does the president or the address itself. Just as my two friends interrupted my attempt to participate in a celebration of Middle America, they interrupt our efforts at stabilizing the middle by providing a persistent presence from below. They do not speak from right, center, or left. They speak from beneath. Biblical religion assesses the state of the union from the bottom up.