KIM LAWTON, correspondent: In the dusty Dominican Republic border town of Jimani, there’s chaos trying to get into—and out of—Haiti. The two sovereign nations may share the island of Hispaniola, but they’ve never been easy neighbors. Nonetheless, the DR has become a major staging point in the international effort to help Haiti’s earthquake victims. In the midst of it all, Dominican and Haitian church leaders are waging an unprecedented joint campaign to make sure the aid gets where it needs to go.

LAWTON: Lorenzo Mota King is executive director of Social Services of the Dominican Churches or SSID. The ecumenical coalition is supported by international humanitarian groups including the US-based Church World Service. Mota King says when the earthquake hit, SSID immediately activated its network of churches. 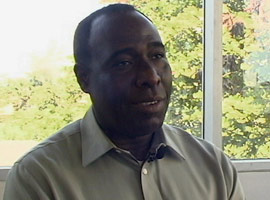 MOTA KING: I’ve now been working 24 hours a day. It’s completely changed my agenda, and it’s been completely crazy, but at the same time it’s been a welcome craziness in that I’m able to serve and help the people of Haiti in some form.

LAWTON: The Christian Reformed Church of Santo Domingo is one of the local congregations mobilizing to help. It’s a relatively poor congregation that struggled to find a generator to power the Sunday night service. Many of the members here are of Haitian descent, and Pastor Pierre Philippe says they’ve been giving sacrificially to help earthquake victims in Haiti and those who are now in the DR.

REV. PIERRE PHILIPPE (Christian Reformed Church of Santo Domingo): Even I’ve been surprised with the help that the church has sent. They don’t give to the church in that way, but with this they feel like they have to. The people are giving from the little that they have.

LAWTON: Philippe, who was born in Haiti, has been trying to help displaced earthquake victims. He delivers hygiene kits packed by US churches, and he finds out information from the victims so that when he travels to Haiti, he can let their families and their pastors know that they are still alive.

These women were released from Dominican hospitals but still need a place to recover. They’re now staying at a local church in Santo Domingo. One of them is Suzette Fanfan, who was treated for an injured arm and leg but also has serious internal injuries. She needs surgery, but the hospitals won’t do it until they can identify someone to pay for it. 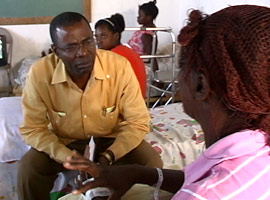 PHILIPPE: I feel a lot of pain for the people who are suffering, but at the same time God gives me strength to continue helping them.

LAWTON: And as director of the DR branch of Bible League International, he tries to offer some spiritual comfort.

PHILIPPE: In this moment, people have very severe emotional damage. This has been caused in part by the earthquake and also by the confusion afterward.

LAWTON: In the border town of Jimani, the Good Samaritan hospital has set up massive tents for the patients who are overflowing the two buildings on the compound. This has been one of the headquarters for teams of doctors who have come from around the world. It’s also a headquarters for faith-based volunteers who have brought food and other relief supplies. Pastor Fidian Orlando Martinez is one of the SSID leaders at the Jimani border.

REV. FIDIAN ORLANDO MARTINEZ (Church of God of Jimani): We’ve had some people come from as far away as Germany, some really tall people. We’ve also some short people come here from Mexico and Peru. We’ve had people here from Argentina, Korea, and really people all over the world have been coming here to show their support for Haiti.

LAWTON: The DR has been a major corridor for getting relief supplies into Haiti, which is no small feat, given the conditions on the ground. Large stretches of the main road are in poor shape. The border is a five-to-six-hour drive from Santo Domingo, depending on traffic and construction projects. SSID has a warehouse compound next to the border in Jimani. It’s a place to store and load relief supplies and to coordinate the logistics for international faith-based aid groups. That’s part of Alex Morse’s job. He’s a volunteer who will be working here for the next six or seven months with Church World Service and SSID. The first shipment from the warehouse went into Haiti within hours of the quake, and they’ve been stocking up ever since. On this day, the warehouse has a donation of crutches and wheel chairs. 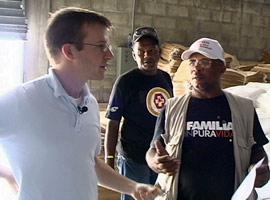 ALEX MORSE (Social Services of the Dominican Churches/Church World Service): With the number of amputations that have happened, it will be really useful to have this as people get used to their prosthetics.

LAWTON: There are 1,500 mattresses for the emergency camps of displaced people and some 40,000 bottles of water just donated by World Vision. These supplies will go from the warehouse directly across the border to pastors inside Haiti.

MORSE: The pastors in Haiti that know their communities and know their needs are able to call us up with whatever things they need, and we’re able to secure those materials for them within 72 hours.

LAWTON: SSID either sends the supplies into the pastors by truck, or the pastors come and get them. Either way, thatcan be a complicated prospect. The border crossing is often clogged with vehicles, including those from religious groups. It can take hours just to cross into Haiti. I’m here on the road between the Dominican Republic and Haiti, and traffic is really snarled up. You can see why it can be difficult to get aid into the country. Inside Haiti, SSID delivers food and water to five different emergency camps, including one with 10,000 people. The group says their camps haven’t seen the food riots other places are reporting.

MORSE: It’s just organized by the Haitian pastors, who understand Haitian culture and are able to communicate easily with the people.

MOTA KING: One thing I feel is happening is that a lot of Americans are sending resources to Haiti through sources that may not have established lines of distribution there, so there’s been a lot of wasted resources that have been lost in that method. 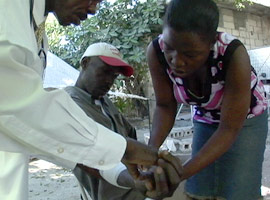 LAWTON: The key, SSID believes, is empowering Haitians to take the lead.

PHILIPPE: I’d say to all the people who want to help, they have to put their faith in the leadership that’s in Haiti. They shouldn’t go and do things for the Haitians with the idea that they can’t do anything for themselves, but to let the Haitians play a role in the reconstruction of their country.

LAWTON: SSID is already trying to move more operations into Haiti. Since the earthquake, Haitian schools have been closed indefinitely, even in areas that weren’t damaged in the quake, such as here in Fond Parisien. Except for the occasional game of pickup basketball, not much is happening on the campus of this church-run school, so SSID is turning it into a temporary hospital for the overflow Haitian patients in the DR.

MORSE: It’s very important to have a place inside Haiti because a lot of people want to finish their recovery in places where their family can come and visit them, where they feel a little more comfortable, and where it’s easier for them to get basic services that they’re more familiar with.

LAWTON: The hospital will be ready to go once they find three Haitian doctors who can speak Creole, French, and Spanish, in order to work with their Dominican counterparts. For centuries, there’s been animosity between the DR and Haiti. Leaders here say the earthquake and its aftermath are changing perceptions on both sides of the border. Pastor Martinez’s Church of God in Jimani sponsored a round-the-clock prayer vigil for Haiti, broadcast across the DR with the help of cell phones and the Internet. There was an outpouring of goodwill.

MARTINEZ: To be honest, at this point I really don’t know who’s Dominican and who’s Haitian, we’ve been working so closely here, and I think it might be one of the ways that God was working here to bring both sides of the island together. So now instead of being two countries, we’re just one island.

LAWTON: One island that still has enormous work ahead.

Reporting from Haiti and the Dominican Republic, I’m Kim Lawton.