BOB FAW, correspondent: The book itself seems slight, but as author Mitch Albom tells those who turn out to buy the best-seller, its message is about the power of faith.

MITCH ALBOM (speaking at book signing): It is about looking at one another and saying, “You’re a child of God, too. Everybody is.”

FAW: It all began nearly 10 years ago when Albom’s former rabbi, Albert Lewis, who was head of the New Jersey synagogue Albom attended as a boy, asked him to write the rabbi’s eulogy.

ALBOM: I had never known of a lay person to do a eulogy for a clergy person. I thought those guys had worked it out amongst themselves. You know, I go first, you do me; you go first, I’ll do you. So how I was all of a sudden in this loop was beyond me. I was totally overwhelmed by the idea of my doing it.

FAW: Besides, by then Albom was an acclaimed author and columnist who says he had lost his interest in religion. 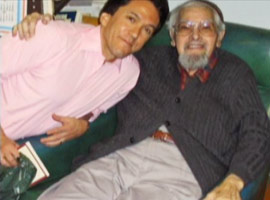 ALBOM: I had been raised with faith, and then I basically said I don’t need it much anymore. I’m doing okay, I’m healthy, I’m making money. Most of the people I love and care about are all right. I basically just left it by the side of the road.

FAW: But during his weekly visits to New Jersey to talk to the old rabbi, Albom became more and more impressed not just by the rabbi’s wit and his beguiling sense of humor, but impressed mostly by the rabbi’s wisdom and his goodness.  And over the course of those eight years, Albom says something was rekindled.

ALBOM: I knew that I learned something every time that I was there with him, and I knew that I felt better about myself every time I visited him and every time I left. I had a very extensive religious education as a kid; I just put it to sleep for awhile, and he sort of, you know, shook it loose and woke it up.

FAW: During those eight years, in his adopted home of Detroit where the unemployment rate is one of the nation’s highest, with 30 per cent of its homes and buildings abandoned and one-third of its people in poverty, Mitch Albom met another man of faith, Henry Covington, now raising his voice to the Lord after an earlier life as a hard-core drug addict, dealer, and violent criminal. 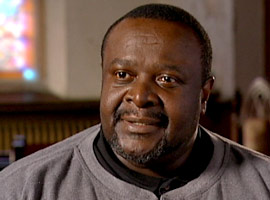 PASTOR HENRY COVINGTON (Pilgrim Church and I Am My Brother’s Keeper Ministries): At the lowest point, when I’d robbed some individuals I used to sell with, I almost had a nervous breakdown. They were coming to kill me, and my prayer was, “Lord, if you get me out of this I’ll serve you, I’ll give this up,” and he heard me. He heard me.

(speaking to Pilgrim Church congregation): Let’s give the Lord a hand, please.

FAW: Since 1992, Covington has been feeding and housing the homeless of Detroit in what was at the turn of the century one of the city’s grandest churches. Now, though, its paint was peeling, its windows broken, and what began in 2006 soon became a gaping hole in the ceiling.

COVINGTON: You could fit a school bus through here.

FAW: That’s how big the hole was?

COVINGTON: That’s how big the hole was. The heat was just flying though. To heat this it would cost $5,000 a month during the winter. 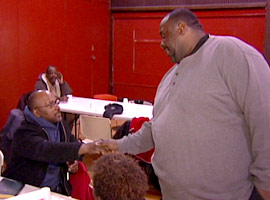 FAW: Despite the miserable conditions, Covington refused to give up.

(speaking to Covington): You could have, I guess, walked away and said it is beyond repair. You don’t think that way?

COVINGTON: No, no. There’s—all things are possible with God.

FAW: And, says Covington, because he had been saved he felt an obligation to help save others.

COVINGTON: I called to him, and he heard me, so I feel that I need to show my gratitude to God by showing someone else the love that Christ showed me.

FAW: When Mitch Albom witnessed what Henry Covington was doing, Albom realized Covington and the rabbi were kindred spirits.

(speaking to Albom): And as the rabbi told you, it’s how you act. That’s the reflection of your beliefs, and that’s what you saw in Henry?

ALBOM: Oh, yeah. I saw it right off the bat. He sits there for hours by himself just looking at those homeless men sleeping on the ground and making sure they are safe. He does live his life in a righteous way. 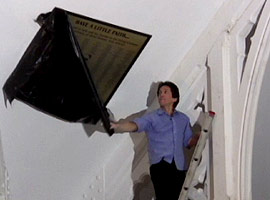 FAW: Albom’s book, Have a Little Faith, brought Covington so much attention and so many contributions his church was slowly refurbished, and last year, in a celebration full of joy and praise Mitch Albom himself climbed to the ceiling and where once there had been that gaping hole unveiled a plaque listing all those who’d donated to the church.

ALBOM: What was patched here, though, was more than a broken roof.

COVINGTON: That hole in the ceiling—that represented most of us. We all have holes in our lives, great big voids that need to be filled, and just like the Lord saw fit to bring about the means to cover those holes and seal them and fix the roof, he did the same type of work with us.

FAW: The real story here is transformation, not just of a dilapidated church with a hole in the roof but of a once-cynical reporter who says he’d pretty much walked away from his religion and who, because of his encounter with two different men of faith, was himself transformed. Shortly before the rabbi’s death in 2008, Albom told the rabbi he doubted the two would meet in another life.

ALBOM: I said, “Well, come on, I mean, they have a special section for people like you, you know. You’re a man of God,” and he looked at me very sweetly, and he said, “You’re a man of God. Everybody is.” It was, to me, what I have tried to say in this book. 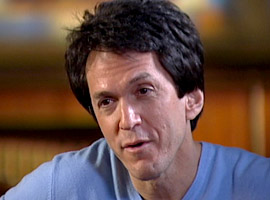 FAW: When Rabbi Lewis died, Albom did give the eulogy. Covington’s church is now on sounder financial footing than ever, and as a result of the book Albom created a new charitable foundation.

ALBOM (speaking at book signing): The thing that makes me proudest is we started this Hole in the Roof Foundation to help churches that help the homeless, if they have holes in the roof or windows broken or things like that.

COVINGTON: I believe that he reignited faith that was, you know, that was there as a flicker, and I guess the Lord turned it back into a flame.

FAW (speaking to Mitch Albom): Are you comfortable now if I were to call you a man of faith?

ALBOM: I would take it as a compliment. I would try to be worthy of it. I would say I’m a man attempting to be a man of faith, and it’s the trying—that’s what it’s all about, you know.

FAW: The journey of a wise-cracking, saintly rabbi, a hard-core addict who turned his life around, and a writer who will never be the same.

For Religion & Ethics NewsWeekly this is Bob Faw in Detroit.