KIM LAWTON, correspondent: At the CORE/El Centro natural healing center in Milwaukee, Sister Madeline Gianforte is using Reiki on one of her clients. In this Eastern healing technique, practitioners place their hands on or above someone in an effort to enhance the body’s flow of energy. They say that can lead to physical and spiritual healing.

SISTER MADELINE GIANFORTE (CORE/El Centro): As a practitioner, I’m just facilitating that energy. But you are doing your own healing in the sense of connecting to the divine and the healing that happens within.

LAWTON: Gianforte is a nun with the Sisters of Saint Agnes. She’s also a trained Reiki master. She says Reiki fits well with her faith.

GIANFORTE: It’s an incredibly spiritual, prayerful experience for me. It calms the inner part of my being so much that I can tap that deepest place, the core place of who I am.

LAWTON: But the US Catholic bishops say Reiki is superstition, and they’ve urged Catholics not to provide or support it. Reverend Tom Weinandy is executive director of the bishops’ doctrine committee.

REV. TOM WEINANDY (US Conference of Catholic Bishops): The problem that we had with Reiki, in the end, was that we felt it sort of fell between the crack, that it was neither really a medical or scientific technique nor was it a religious technique that was compatible with Christianity.

LAWTON: Reiki, with its strong emphasis on the spiritual, was developed in Japan in the early 20th century. Using various hand positions, practitioners help their clients access what they call a universal life force, a spiritual or divine energy force. They claim that energy force can reduce stress and accelerate the body’s natural healing process. A favorite of New Age centers, Reiki is also increasingly used in hospitals and medical clinics.

GIANFORTE: I did a lot of Reiki with my mom when she had cancer, and she was very, very sick with chemo and radiation, and one of the greatest things for her was that it alleviated a lot of the side-effects and the symptoms of radiation and chemo, and then ultimately in her final stages it kind of allowed her to peacefully go.

LAWTON: Gianforte helped found the nonsectarian CORE/El Centro as a place where everyone, but especially low-income people, could have access to alternative medicine and natural healing techniques. Reiki is one of many practices here based on an Eastern holistic philosophy focusing on the body, the mind and the spirit.

GIANFORTE: If the spirit isn’t addressed, and only the body is, a complete healing won’t be possible.

LAWTON: Lauri Lumby Schmidt uses Reiki in her ministry as a spiritual director.

LAURI LUMBY SCHMIDT (Authentic Freedom Ministries): There is a wide range of things that people can experience, but it does tend to be much more profound than just straight relaxation.

LAWTON: Schmidt did her Reiki training or “attunements” with Catholic nuns, who she says, taught it from a Christian perspective. 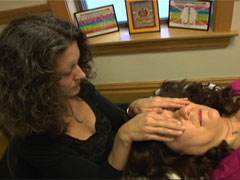 SCHMIDT: When I really look at Jesus’ ministry and what he was all about, it was about healing, and he empowered his disciples to do the same thing. He commissioned them to go out and heal.

LAWTON: But the Catholic bishops say they received more and more questions about Reiki, so they commissioned a study, and last year released guidelines which said “a Catholic who puts his or her trust in Reiki would be operating in the realm of superstition.” And the guidelines concluded “it would be inappropriate for Catholic institutions, such as Catholic health care facilities and retreat centers, or persons representing the Church, such as Catholic chaplains, to promote or to provide support for Reiki therapy.”

WEINANDY: God is God, and human beings are human beings, and we can petition God, but we can’t manipulate him, and we felt that this was what was happening in the context of Reiki, that the person learned how to be in touch with the divine cosmic forces such that they could now manipulate it through a laying on of hands or a massage or something that the person could be healed.

LAWTON: Many Reiki supporters were taken aback by the statement’s tone.

GIANFORTE: It’s not a religion. It’s just a practice that assists people in connecting more deeply to the more spiritual soul places within themselves, so I was pretty surprised by that.

LAWTON: The document said the Church recognizes two kinds of healing: natural means through the practice of medicine and healing by God’s divine grace. In the Christian tradition, there is the sacramental anointing with oil and the laying on of hands.

WEINANDY: Christians can pray for one another, lay hands on a sick person, and ask Jesus to heal them, but you’re not channeling divine energies through your hands.

LAWTON: Weinandy says sometimes individuals or even places such as the pilgrimage site in Lourdes, France appear to have a special gift of healing. But he says physical healing is never guaranteed, and it’s always up to the will of God.

WEINANDY: It’s not that he loves one person more than the other, but we don’t know why the Lord would heal one and not another person, but it is a mystery.

LAWTON: Reiki practitioners deny that they are trying to manipulate God.

SCHMIDT: You can tell when you are facilitating and sharing Reiki with someone that you are not guiding it, you know. You can tell that there’s a higher power that is doing the work.

LAWTON: Schmidt says she chooses to give the credit to God.

SCHMIDT: For me, Reiki is another form of prayer. It’s allowing myself to be a vessel through which then God’s healing can then be experienced by the person that is receiving the Reiki.

WEINANDY: If you try to plug Reiki into Christianity, what you’re saying is Jesus is not good enough on his own. He’s got to be supplemented by something else, in this case, the divine forces, so you’re either downgrading Jesus and Christianity or you’re taking the heart out of Reiki.

LAWTON: The bishops’ document is not a mandate, and local dioceses may implement it as they choose. But Reiki supporters say it’s already had a chilling effect. Many Catholic institutions, including hospitals and retreat centers, are no longer offering Reiki, and most nuns are reluctant to speak publicly about their use of Reiki.

LAWTON: Schmidt says she’s sad the bishops would oppose something that has meant so much to her spiritually.

WEINANDY: I want to stick with Jesus. I don’t want to open myself up to other forces that may be, you know, supernatural in some sense but not of God. I think it’s a risky business to be playing around with this sort of thing.

LAWTON: While the theological debates continue, the National Institutes of Health has funded a study on the possible health effects of Reiki.