Editor’s note: A recent Newsweek story (May 21, 2014)  accuses Somaly Mam of extensive fabrication about herself and her alleged past as a victim of abuse. She has stepped down from the Somaly Mam Foundation, which says it has begun a third-party investigation into the allegations.

LUCKY SEVERSON, correspondent: This is a big day for the girls here at this secluded place a few hours drive south of Phnom Penh, Cambodia. Their mom is coming for a visit.  Not their real mother, although she might as well be. Her name is Somaly Mam.

(speaking to Somaly Mam): Where are their mothers?

SOMALY MAM: They don’t have their mothers here. A lot of them, they have been exploited, raped.

Somaly Mam was very young when she was sold to a brothel, doesn’t know how old she is now or who her parents are. She doesn’t even know her real name. She says her life didn’t begin until she ran away after she was forced to watch a pimp shoot another young girl in the head. 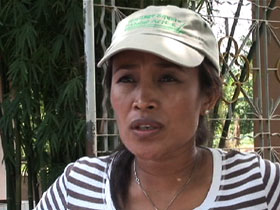 SEVERSON: After escaping the brothel, Somaly married and moved to Paris but was haunted by the knowledge that thousands of other young girls were still experiencing the horror she was trying to forget. So she went home again and created a recovery shelter like this, where girls can escape sexual slavery. Somaly now operates sanctuaries in Cambodia, Thailand, Laos, and Vietnam that care for over 500 girls. There are 72 girls and four children in this center on the outskirts of Phnom Penh. Most of the girls here are over 18, but many of them were sold or forced into prostitution when they were only 12, and they have the emotional scars to prove it. This young girl, who was afraid to give her name, was forced into prostitution when she left her very poor family in the country and came to Phnom Penh to find a job at a restaurant.

CAMBODIAN GIRL THROUGH TRANSLATOR: One day I had been raped by a policeman. I did not know any people in Phnom Penh, and the guy said to me if I dare to make complaint or tell anybody I will be killed.

SEVERSON: The policeman then sold her to a brothel where she says she was beaten if she didn’t have sex with five men a day. She was sold again before finally being rescued by a man who took pity on her. Then she found her way here, where she can attend school and learn skills like hair and makeup, sewing—anything that will keep her off the streets.

CAMBODIAN GIRL THROUGH TRANSLATOR: I hope that when I get skill from the center, and I get my own income, other people will not look down on me.

SEVERSON: Many girls were as young and innocent as these kids on the Phnom Penh streets when they were coerced into sex. Even though they are victims, like the little girls shown in undercover footage, they are also the condemned. It’s hard for many to go home, because in Cambodian society guilt is often attached to the girl, not the man. 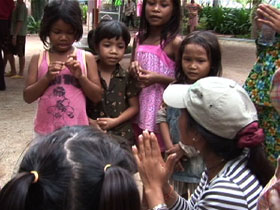 SOMALY MAM: I get very upset with the culture. The culture is very bad.  They never ask the question about the man, about the client. Because they are poor, because they have bad luck, it’s always their fault.

SEVERSON: She says the police are getting better at investigating sexual slavery but says too many are still corrupt. She’s especially angry and frustrated with the justice system Cambodia that often seems to favor the predators.

SOMALY MAM: One little girl died here a few months ago. She had been raped, 7 years old, and then we go to the court. The court tell it’s her fault because she wear very short skirts.

SEVERSON: The little girl committed suicide, which tragically is not that uncommon, according to psychologist Kim Ratsmey. He counsels Somaly’s girls and says many suffer depression, and too many commit suicide.

SEVERSON: Like Natalie, most of Somaly Mam’s girls grew up in a culture where the vast majority of citizens embrace Buddhism, which teaches that suffering is a necessary part of life and a result of karma, or a person’s behavior in a past life. Natalie was raped and severely beaten when she was nine. She’s been with Somaly for six years and wants to be a translator when she grows up. She has not forgotten, but she has been taught to forgive the man who abused her.

SOMALY MAM: Why I have to teach my girls to hate men or to hate the people? Forgive them. It’s not for them, but for yourself.

SEVERSON: Somaly says she does not hate men, but she discovered when she got married that she could never love a man again.

SOMALY MAM: I talked to him. I never get in love with you. I cannot love you, and he tell me don’t worry. We will try. I will help you. 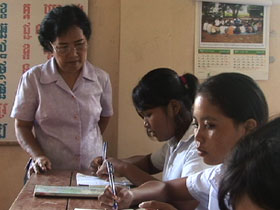 SEVERSON: Their marriage ended in divorce, although they are still friends. Her passion is reserved for her girls, and she works closely with undercover police to help them escape from brothels. She has been threatened many times, but none worse than when her 14-year-old daughter was kidnapped. The police recovered her daughter several days later.

SEVERSON: It was a decision that still pains her, but she says she had to travel abroad to raise money for her shelters.

SOMALY MAM: In the shelter we have no rice, not money, nothing to feed the children. If I’m going they give money. I have almost 500 girls, and I have one daughter. One daughter between 500 girls, which one you choose?

SEVERSON: Her passion has not always endeared her to human rights groups and Cambodian authorities. Patrick Stayton is the Cambodian field director for the International Justice Mission, a faith-based organization that works to improve justice systems in Third World countries. He knows Somaly.

PATRICK STAYTON (International Justice Mission): She has ruffled her share of feathers, but you can’t help but to respect and appreciate her tenacity and the cause.

SEVERSON: She upset human rights groups when she refused to allow mothers who had sold their daughters into sexual slavery to visit them at her centers.

SEVERSON: Somaly Mam has gained international attention and attracted celebrities and friends in high places, but has become increasingly frustrated with authorities who don’t enforce laws that are on the books, and with those who offer to help but don’t follow through.

STAYTON: I think it may be tougher for her sometimes at home here, because you know the person that stands up in the crowd and talks about injustices that they see and demanding something to be done about it—that’s not the popular person to be often in this kind of culture. 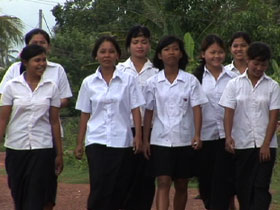 SEVERSON (speaking to Cambodian girl named Lytaiye): Where are your mom and dad?

LYTAIYE: I no have mom and dad.

SEVERSON: No mom and dad?

SEVERSON: Fourteen-year-old Lytaiye wants Somaly to keep fighting, keep ruffling feathers. Her grandmother sold her to a stranger before she was 12. The man raped and beat her before she escaped.

SEVERSON: So you have a happy ending?

LYTAIYE: Before I’m not happy, but now I’m very happy.

SEVERSON: These men are setting up for a wedding tomorrow. What makes Somaly Mam the happiest is when one of her girls gets married to someone she wants to marry.

SOMALY MAM: All the girls who get married, I go to see her husband: You have to be careful with my girl. If not…

You know, if you have to say thank you it’s not to me. It’s to them. They give to me everything.

SEVERSON: It’s estimated that there are as many as 50,000 sex slaves and prostitutes in Cambodia and that one in 40 girls born in this country will be sold into sexual slavery.