LUCKY SEVERSON, correspondent: A personal moment of prayer for Joey Heath, a Master of Divinity student at Wesley Theological Seminary in Washington, DC. There was a time it seemed very unlikely he would be where he is today, a time when he was praying for God to make him whole, make him so he wasn’t gay.

JOEY HEATH: At the time I believe that it was something I needed to be healed from, and so I would pray every day that God would just heal me of this, this evil part of me, and that this would be just removed and I would be cleansed and made whole again.

SEVERSON: Today, Joey says he feels whole, but he’s still gay and still facing the kind of condemnation he faced in his United Methodist church when he first came out.

HEATH: I was involved somewhat in the leadership of the campus ministry, and then my campus minister said I can no longer speak on behalf of the ministry because it’d be an endorsement of my lifestyle, which for me was devastating.

SEVERSON: Pastor Heidi Neumark says that condemnation has led to outright discrimination. She says too many churches have created an environment where it’s okay to bash gays or lesbians or bisexuals or transgenders, known collectively as LGBTs.

PASTOR HEIDI NEUMARK (Trinity Lutheran Church of Manhattan): Churches have played a huge role, probably the largest role in fostering homophobia. The church encourages these young people to be viewed as less than human, dehumanized and even demonized, and it creates an atmosphere where it’s okay to be verbally abusive, be physically abusive. So these young people, many of them, suffer profoundly, physically, psychically, spiritually.

SEVERSON: During the day, Pastor Neumark runs a school for young children at her New York City church, which is part of the Evangelical Lutheran Church in America. At night she operates a shelter for LGBT kids, because she says since churches have been a big part of the problem, they should be part of the solution. Jonathan Sawyer, who sleeps in the church basement every night, represents an alarming statistic. Nationwide, 20 to 30 percent of homeless kids are LGBT. In New York City it is one in three, according to Zak Rittenhouse, who works in a homeless shelter for gay and straight youths.

ZAK RITTENHOUSE (Green Chimneys): Here in New York City, 7,000 kids identify as gay or lesbian, and they’re on the streets for various reasons, and there’s definitely some religious ties to that.

SEVERSON: Zak is gay. He grew up in a Baptist church, where he says he was taught that being gay was sick and an abomination. He says many kids who come out are forced out the house by parents who accepted that doctrine from their churches.

RITTENHOUSE: The parents don’t know how to react when their kids come out, so they push them out on the streets. The kids don’t feel safe at home, so they run away.

SEVERSON: Matt Gromlich went to a private Christian school and says what he had been taught in church made it traumatic when he discovered he was gay.

MATT GROMLICH: At some churches that I’ve visited, you know, there’d be messages about how homosexuality is wrong, or they’d throw it in with a list of sins, and, you know, I wouldn’t really say anything, but just not go back. In that time I was really struggling with faith and being gay, you know, and well, if I accept that I am gay, which I had at that point, then how can I still be Christian?

HEATH: The church says these things where, you know, if you don’t change, you’re going to hell, and people get to a point where they feel like, well, I can’t change, so I guess there’s no hope, and so they abandon the church.

SEVERSON (speaking to Pastor Bob Perdue): If I came to you and I said, “Pastor, I am gay,” what would you say to me?

PASTOR BOB PERDUE (Senior Pastor, Old Dominion Baptist Church, Bristol, Virginia): I would say that’s against the creative order of God. It violates the way God has set it up, and so while I understand that you have that attraction and that it developed maybe by no fault of your own, you’re not free to act upon that.

SEVERSON: Bob Perdue is pastor of the Old Dominion Baptist Church in Bristol, Virginia. Like many other Christians, he believes the Bible makes it clear that living a gay lifestyle is a sin. But he doesn’t believe it’s any worse than any other sins.

PERDUE: A lot of times the church will quote Leviticus 18:22 and say, you know, man lying with man is an abomination. What we forget is that Proverbs also says pride and lying and gossip are also abominations to God.

SEVERSON: Nor does he believe, like many Christian conservatives, that being gay or lesbian is a choice. But he does believe that acting on an attraction to the opposite sex is a choice and a sin to God.

When Zak Rittenhouse came out, his parents sent him to a six-week camp that promised to make him interested in women.

RITTENHOUSE: They had told us all that by the end of this six weeks we would all be heterosexual men and women walking in the light of the Lord.

SEVERSON: He says of the 80 kids who went to camp, to his knowledge none came out straight. Though there are no reliable statistics on whether these ex-gay ministries actually work, many, including Pastor Neumark, think it is cruel to try to force change on these young people.

PASTOR HEIDI NEUMARK: There’s members of the congregation here who have been in therapy to try and get them to stop being gay and, well, I haven’t talked with anybody that that’s worked for. I think that’s abusive.

SEVERSON: Pastor Perdue says both he and the church are there to help heal those who are broken, whether it’s sex, pornography, gambling.

PERDUE: I would first ask you why you considered yourself gay, and I would expand that identity to include other parts of who you are and hopefully get you to see that you’re so much more than just that sexual attraction, you know, just like an alcoholic. I do the same thing with them.

SEVERSON: Like an alcoholic, says Perdue, homosexuals need to learn how to control their yearning so they can, in his words, “experience life to the fullest.” The pastor knows of what he speaks.

PERDUE: I was sexually abused at 10 or 11, and those were my first sexual memories, so I developed an attraction, a same-sex attraction, which obviously at first—my first response to that was to suppress it. And then the kind of guilt and shame of all of that led me to a suicide attempt. 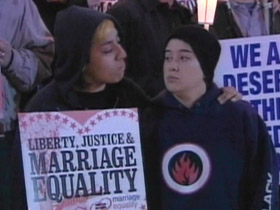 SEVERSON: After 30 days in a psychiatric hospital, Pastor Perdue says he came to terms with his sexual proclivity. He’s now married and the father of five children.

PERDUE: I can’t say that my attraction has completely changed. I liken it to my fellow ministers who are married. Their attraction for other women hasn’t gone away, but they’re choosing not to act on that attraction because they’ve made a vow and a commitment in a certain direction. It’s the same for me.

SEVERSON: There are a number of denominations that accept practicing gay ministers, and Pastor Neumark says as more young people come out, and homosexuality becomes better accepted by society, ever more churches will have to eventually teach tolerance, even if they believe the lifestyle is sinful.

NEUMARK: What really makes me angry is to know that church people—because I love the church, I’m a pastor of a church—have a real hand in creating so much pain.

SEVERSON: Pastor Perdue agrees the position of many churches against homosexuality has been harmful but says he doesn’t know many other pastors who share his view.

SEVERSON: After Joey Heath completes his theological education, he hopes to be ordained a pastor.

HEATH: I feel called by God to minister to those that have been pushed out and neglected by the church, and the church to a certain point has created a class of people that are not worthy of church, and I want to go to those people.

SEVERSON: But before he can go to those people, he needs to be ordained, and the United Methodist church, his church, does not as yet ordain self-avowed, practicing homosexuals. For Religion & Ethics NewsWeekly, I’m Lucky Severson in Washington.