The US government has a long history of trying to help poor countries get out of poverty. Since the end of World War II, the US has given or loaned 150 countries more than a trillion dollars worth of aid, not counting military assistance or the work of private charities and nongovernmental organizations, many of them faith-based.

We wondered what the lessons are in all this experience for, as they say, “fixing Haiti.” The good news is that in recent years many of the world’s poorest countries have seen an unprecedented amount of economic development. William Easterly is a professor of economics at New York University.

PROFESSOR WILLIAM EASTERLY (New York University): Hundreds of millions are escaping from abject poverty. In fact, we’ve seen the greatest reduction in poverty in our generation that has ever been seen in human history.

ABERNETHY: In overcoming hunger and disease and disasters, US economic aid has saved millions of lives. But in the longer term effort to help poor countries develop and remain better off, many experts say US government aid has played only a minor role. 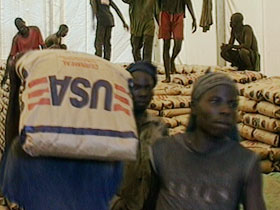 ABERNETHY: For instance, in the 20 years before the earthquake, Haiti received $5 billion in all kinds of US aid.

EASTERLY: It is Exhibit A in the case that aid does lead to very disappointing results as far as actual reductions of poverty.

ABERNETHY: Even one of foreign aid’s most loyal supporters is critical. He is Lutheran pastor David Beckmann, president of the Christian lobby Bread for the World.

PASTOR DAVID BECKMANN (President, Bread for the World): I think our foreign assistance system is broken. It does some good. It does a lot of good. But we can get a lot more impact out of those tax dollars.

ABERNETHY: Well, if foreign aid didn’t cause the world’s great poverty reduction, what did?

ABERNETHY: In China, for instance, and India. So why didn’t the US foreign aid program get more for its money?

EASTERLY: Corruption is a really disappointing story in aid, because a lot of aid did go to very corrupt governments, and it was, frankly, just stolen, so it did not reach the poor.

BECKMANN: It’s not just the aid, then it’s the coordination of aid with trade and diplomatic policy. We charge Bangladesh more in tariffs for the things they import into the US than we give them in aid. So we are taking away with one hand, and we give with the other.

ABERNETHY: In Washington, responsibility for foreign aid is spread over 12 departments, 25 agencies, and 60 offices, each with its own priorities.

ABERNETHY: Meanwhile, many special interests here at home benefit from US aid abroad. 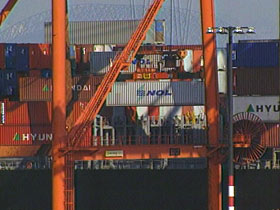 BECKMANN: Every dollar that we appropriate for food aid, more than 50 cents goes to transportation and administration. It’s partly because there is a small group of shipping companies —they are US-flagged shipping companies, and the law says they get to ship that food. They are very well-positioned to lobby Congress, and they push that all that money that is supposed to go help the poorest people in the world should go to food that they are going to ship. It’s a scandal.

ABERNETHY: Andrew Natsios tried to change that. He is a former administrator of the Agency for International Development (AID), now teaching at Georgetown University. Natsios wanted AID to be able to buy food abroad. That would help farmers in poor countries and permit quicker response to famine.

ANDREW NATSIOS (Professor, School of Foreign Service, Georgetown University): It’s much faster. It’s four months faster to buy food locally than it is to ship it.

ABERNETHY: And that could save lives. Natsios proposed buying locally to President Bush, but—

NATSIOS: We could not get it through Congress because the shippers and the maritime unions opposed it, the grain producers and processors opposed it.

ABERNETHY: Last year, however, some local purchasing was approved. Professor Easterly has a long list of other reforms he would like, such as eliminating what he calls top-down development.

EASTERLY: Top-down development is the official aid agencies decide what Haiti needs, they know the answers already, and they don’t need to ask the Haitians. The characteristic feature of the top-down approach is a plan, a grand plan to solve everything all at once. Of course, these plans work about as well as the five-year plans did in the Soviet Union. The aid agencies really are not held accountable for results. All they are really held accountable for is just spending the aid money. We don’t talk about how much of that did actually reach poor people.

EASTERLY: There’s this awful problem of paternalism. That we the rich Americans know what is best for poor people in Afghanistan or poor people in Cameroon or in Haiti. That is an incredibly arrogant attitude—that we think we know how to solve other people’s problems better than they do themselves.

ABERNETHY: Professor Natsios agrees with some of the criticism, but he strongly defends AID. 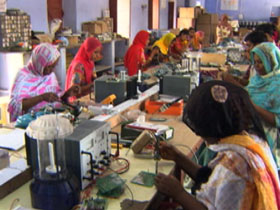 ABERNETHY: The formula is aid plus effective government and public safety make possible private investment and then trade, the essential key to development.

NATSIOS: There is no real example of a country leaving the ranks of the poorest countries and becoming a middle-income country without an export-based strategy. So we know that it works, and all the Asian examples are all export-based. So it’s very important. However, you can’t do it in absence of aid. Trade is essential, but it’s not trade or aid. It’s trade and aid.

ABERNETHY: But what if a country such as Haiti doesn’t have effective government and security?

ABERNETHY: Could the US help?

EASTERLY: Unfortunately, the record shows that we really don’t know much about how to fix governments from outside.

ABERNETHY: As the people of Haiti try to anticipate long-term development, Haitians there and in the US recommend a new US attitude. Ketleen Florestal is a Haitian and an economist at the Inter-American Development Bank in Washington.

KETLEEN FLORESTAL (Country Economist for Haiti, Inter-American Development Bank): We lost all our identity, in a sense. I was talking to friends. Everything that reminded us of our childhood and our life is destroyed.

FLORESTAL: We are very proud. We would like to define our future, because we feel that when we are getting assistance, our future is sometimes defined for us. I am definitely convinced that what is best for Haiti is not what is imposed to Haiti. I will call for everybody who wants to help to call on to the humility, a lot of humility.

EASTERLY: I think we have to change our mindset from the idea of fixing Haiti to just the idea of doing as much as possible to help individual Haitians help themselves.

BECKMANN: Yes, we need aid coordination. So if some agency is going to be set up to make sure we won’t all trip over each other. That could be a good thing. But Haitians need to be in charge. Haitians need to be deciding their own destiny. They are going to have to solve the problem, or it won’t be solved.

ABERNETHY: The consensus we heard is that helping Haiti develop will be very difficult and will take a long time. Haitians should lead. The US should help.