KIM LAWTON, correspondent: Sudan’s Western Darfur province is considered one of the bleakest places on the planet. A state of humanitarian emergency has been in effect for more than seven years, since conflict broke out between the Sudanese military, government-backed militias, and various rebel groups. Hundreds of thousands of Darfuri civilians have been attacked, raped, and killed in what many in the world consider a campaign of genocide. Millions have been displaced. The Sudanese government has expelled most international relief groups. But dotted along Southern Darfur’s dusty terrain there are signs of ongoing aid, surprisingly, from a United Methodist church half a world away called Ginghamsburg.

REV. MIKE SLAUGHTER (Lead Pastor, Ginghamsburg Church): We see the purpose of the local church of going out into the world, being the hands and feet of Jesus to the hurting, the oppressed, the poor, and being the empowering center in that local community. 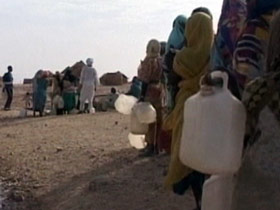 LAWTON: Ginghamsburg Church is located in Tipp City, Ohio, a predominantly blue-collar suburb of Dayton. The church has partnered with the United Methodist Committee on Relief, or UMCOR, for its humanitarian work in Darfur, and since 2004 the congregation has committed $4.4 million to those projects. Ginghamsburg lead pastor, Mike Slaughter, says his congregation members felt morally compelled to get involved.

SLAUGHTER: Often the church remains silent in the face of injustice, whether it’s slavery, segregation, genocide. I don’t have time as a pastor to just do religious services where people come and feel better about themselves. I want to lead a movement of people who want to make a difference, a God-difference, in the world.

LAWTON: About 4,500 people come to the Ginghamsburg Church every week. Their donations have built 173 schools in Darfur. Those schools serve about 22,000 students. They’ve also sponsored a sustainable agricultural project, which has now helped to feed an estimated 80,000 Darfuris. They’ve built water systems to provide clean water and sanitation to more than 60,000 people, and they’ve begun micro-enterprises, such as a brick-making factory, to help fund the projects. The programs are run by local staff on the ground. Most Darfuris are Muslim, but Slaughter says his church is not there to convert them to Christianity.

SLAUGHTER: Compassion doesn’t have any strings attached. You serve people because they’re human beings created in the image of God, loved by God.

LAWTON: Still, he admits, his church members don’t hide what motivates their work. 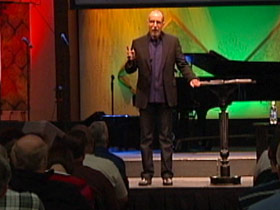 SLAUGHTER: People ask us why sometimes, and at that point I share because I do this out of my faith, that I believe this is what it means to follow Jesus.

LAWTON: Because of the security situation, it’s difficult for outsiders to get in. But Ginghamsburg tries to send groups as often as possible to see the work firsthand. Slaughter led a delegation there late last year.

SLAUGHTER: I share with my own family that I need to do this kind of experience. I need to get into where these people are, you know, in dangerous places, about once a year for my own soul-health, and I really come back and realize what’s important.

LAWTON: Slaughter believes the Sudan work has had a profound impact on the Ginghamsburg congregation. When he proposed the first Darfur project at Christmastime in 2004, some people were apprehensive.

SLAUGHTER: I said, “Hey, Christmas is not your birthday. It’s Jesus’ birthday,” because Christians have made Christmas one of the biggest, hedonistic kind of self-focused, materialistic feast. What would Jesus really desire? So I said, “Whatever you spend on yourself, bring an equal amount for this agricultural project we’re going to do in Darfur.”

LAWTON: They raised $318,000, and in the following year it yielded 18 bags of food for every seed planted. Slaughter says his people learned what a difference they can make. It’s a lesson they begin learning here at an early age. The children’s programs hold special projects not just to raise money, but to teach about life for kids in Darfur.

NICKOLAS STEFANIDIS: It’s rough. There’s a war going on, and some of their parents are dead, and they have to live by themselves and take care of their younger siblings. 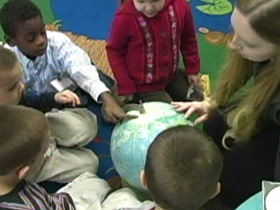 HAYDEN HARTMAN: They walk many miles to get their water, but it still might not be very clean.

HANNAH BINGHAM: It’s just nice to help them, because they don’t have all that stuff that we have.

LAWTON: This past December, the church’s “Christmas Is Not Your Birthday” campaign raised almost $700,000 for Darfur. Slaughter was especially impressed because the community, which was heavily dependent on the automotive industry, has been hard hit by the recession.

SLAUGHTER: These people are serious in their commitment to follow Jesus in sacrificing for the needs of others.

LAWTON: The work in Darfur is not done at the expense of helping people locally. Unemployment in the Dayton area is about 15 percent. Ginghamsburg runs two community food pantries, and Slaughter says while they were serving about 300 people a week last year, now the number has jumped to about 1,500 people a week. The church also has a nonprofit arm called New Path that includes a car ministry, in which donated vehicles are fixed up and given to the needy. There’s Anna’s Closet, which provides used clothing and shoes and actually makes money to support the work by selling items to those who can afford them. And there’s JJ’s Furniture, which provides household goods especially to women coming out of domestic violence situations. In all of it, the operating philosophy is that everyone has something to give. 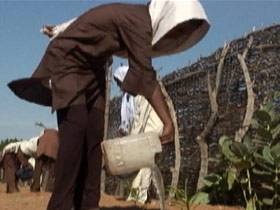 MARCIA FLORKEY (Director, New Path Ministries): So we’ll have folks who come to us for needs, but then they see what this does and how it has impacted their lives and then they come back to us and volunteer. So it’s a really neat cycle to see people who are the receivers become the givers.

LAWTON: Slaughter believes it’s a holistic view of helping your neighbor, wherever that neighbor may be.

SLAUGHTER: So you need to look at the needs in your local community, your city, your county, your country, and then out into the world as events continue to unfold in places like Darfur.

LAWTON: For Slaughter, helping people in Darfur is more than just hands-on humanitarian work. He also supports an interfaith coalition that advocates for Darfur at the national and international levels. Christians, Jews, and Muslims are all part of the effort which has been pushing the US Congress and the Obama administration to do more to intervene in the situation.

SLAUGHTER: So it’s very important that the faith community keeps reminding our governments, our economies, that there are moral mandates that we have as human beings toward the treatment of other human beings.

LAWTON: Many in the coalition worry that Sudan’s upcoming elections will not be fair. They fear it could result in even more violence and instability. Slaughter has another worry as well: that in the face of so many seemingly intractable problems, people will grow weary.

SLAUGHTER: But it’s for churches, synagogues, mosques, people from clubs or organizations to really focus on a place of great need and become involved with that place and stay in that place, you know, until we begin to solve some of the world’s problems.

LAWTON: From the devastating earthquake in Haiti to the ongoing problems after Hurricane Katrina, there are many places of need competing for the world’s attention. But Slaughter says Darfur must not be pushed to the backburner.

SLAUGHTER: There’s much still to be done in the Gulf, but the work’s not done, yet money is running out. Haiti? There’s going to be a need in Haiti for years. So you know, again, compassion fatigue is what we have to fight in our own life. Faith is not easy. It is hard work.

LAWTON: Hard work, he says, that cannot be abandoned.