ELIZABETH (speaking in Stephen Ministry training session): I just don’t know what to do.

DEBORAH POTTER, correspondent: Sometimes you just need someone to listen.

ELIZABETH: I just don’t know how to resolve this in my head. I’m just really upset. I can’t forgive myself.

POTTER: Sometimes you need something more—a hand to hold, and maybe a prayer.

PAMELA (praying with Elizabeth): Dear Lord, Thank you for watching over all of us today. In your name we pray.

ELIZABETH: Amen. Thank you. I feel so much better.

STEPHEN MINISTRY TRAINEE: The key thing that I saw is you leaned into her. You engaged her and told her, “I’m listening to you.” 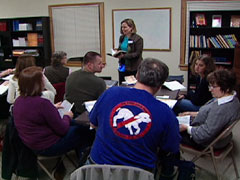 POTTER: They’re learning to be Stephen ministers, named for Saint Stephen, the first Christian martyr who cared for the poor. Parishioners are recruited and interviewed by the pastor, then trained to offer one-to-one care to people in and around their congregation. They commit to be available as needed for two years, but many serve longer. Pam Montgomery has been involved for two decades, balancing Stephen Ministry with responsibilities at home. But sometimes the caregiver is the one who needs care.

PAM MONTGOMERY (Stephen Minister): This is my dad and my mom.

POTTER: Seven years ago, Pam’s father died of cancer. Just two weeks later she lost her grandmother. As she grappled with her grief, a friend surprised her with a suggestion: What if Pam herself asked for a Stephen minister?

POTTER: Kenneth Haugk started Stephen Ministries in 1975, when as pastor of a church in St. Louis he found he just couldn’t do it all. So drawing on his background as a clinical psychologist, he enlisted and trained a handful of lay people to offer confidential care to their fellow parishioners. And then it spread, becoming a nonprofit juggernaut.

Good Shepherd is one of 10,000 congregations around the world where parishioners serve as Stephen ministers. More than 150 Christian denominations have adopted the program.

MONTGOMERY (speaking to trainees): How did it feel to have your confession treated in that way?

POTTER: Stephen ministers go through 50 hours of instruction and practice, learning to help care receivers express their feelings, to listen without judging, and how to bring faith and the Bible into the conversation.

ALLAN (speaking in training session): Can we pray? Dear God, give Rene the absolute confidence of his forgiveness…

POTTER: They also study specific situations, like dealing with grief and divorce. But Stephen ministers are not counselors, so they also learn when to call in professional help from a pastor or therapist. Their work is supervised at the parish level, and if a care-giving relationship doesn’t work out, which does happen sometimes, either party can be reassigned. 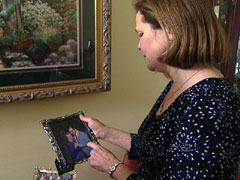 REVEREND DAVID SLOOP (Senior Pastor, Good Shepherd Lutheran Church, Raleigh, NC): It took a while for people to say, instead of “I need to speak to the pastor,” to also say, “Or can I have a Stephen minister?” And that’s a cultural shift, but it did occur, and we’re grateful it did. That old Lutheran concept of the priesthood of all believers—Stephen Ministry helps you live that out.

POTTER: To enroll in the program, parishes pay a one-time fee of about $1700, giving them access to materials and leadership sessions like this one in Orlando, Florida, where experienced Stephen ministers and pastors learn how to train more care givers back home.

JACLYN HICKS: I was a care receiver, and I tell everybody, even before I became a Stephen minister, about my experience.

POTTER: Jaclyn Hicks and her husband were struggling with infertility when her pastor at Church of the Savior United Methodist in Cincinnati suggested a Stephen minister.

POTTER: After becoming pregnant and having a daughter, Hicks became a Stephen minister herself.

HICKS: It’s huge to be on the flip side, to be able to just care for someone during their time of need. It’s been a tremendous blessing, and I get, as a Stephen minister, just as much out of it as I feel my care receivers do.

POTTER: Care-giving relationships are always same-gender, and the program tends to attract more women than men. Rene Anctil of Good Shepherd wasn’t sure at first that he was cut out to be a Stephen minister.

RENE ANCTIL: I tended to rely on myself a lot, and throughout this process I’ve kind of learned that I’m truly the care giver. I’m not the cure giver, and that’s God’s part.

POTTER: While Stephen Ministry relationships are strictly confidential, Anctil’s care receiver, Ed, said we could sit in on one of their weekly sessions. They started meeting more than a year ago, after Ed’s wife died.

ANCTIL: You mentioned that your daughter mentioned to you that she thought you were depressed.

ANCTIL: How did that make you feel?

ED: I don’t think I’m depressed, but you get moody once in a while. Your body wears out when you get old. You always want to do something that you can’t do. That’s the hardest part.

ANCTIL: I think I recognize God in my life a lot more than I had in the past, and a lot of it is because of Stephen Ministry. I see God working not only with my care receiver but with me, which I never saw before.

POTTER: In the 35 years since the program started, half a million people have been trained as Stephen ministers, each one touching at least one other person—and being touched in return.

ANCTIL: I’m not going to go away. I’m going to be there as long as he needs me. I don’t know where the end’s going to be, but we’re going to do it together.

Coping with Loss and Grief