BOB ABERNETHY, host: At a summit meeting in Washington convened by President Obama, leaders of 47 countries promised to take steps to stop the spread of nuclear materials and weapons. This followed agreement earlier by the US and Russia to cut back their deployed nuclear weapons by a third. Many religious groups are active in support of nuclear arms reduction and eventual elimination, and we want to talk about that with Richard Cizik, president of the New Evangelical Partnership for the Common Good. Richard, welcome. There are lots of new organizations around that are trying to call attention to the problem of nuclear weapons. Why now?

RICHARD CIZIK (President, New Evangelical Partnership for the Common Good): Among other reasons, Bob, not simply the outrage that this could happen, that is, detonation of a nuclear device in an American city. That would be enough to motivate anybody, it would seem. But the younger evangelicals and others their age, they grew up post-Cold War, after the fall of the Berlin Wall, and frankly after 9/11. They know terrorism, but they don’t know nukes. But they are optimistic this can be done, the Global Zero movement, but it’s educating a whole new generation that has to be done, who didn’t grow up with it, hasn’t acquiesced to it. 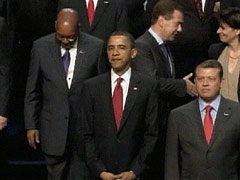 ABERNETHY: How representative do you think you are in this position of evangelicals in general?

CIZIK: I think I’m very—I’ve changed my mind. I was part of the Cold War, part of the evil empire speech by Ronald Reagan, who by the way advocated the virtual elimination of nuclear weapons. So I have changed my views on these subjects due to both the Cold War and 9/11, but I think all evangelicals—

ABERNETHY: But there are evangelicals, aren’t there, who don’t agree with you.

CIZIK: Not everyone is there, but the younger evangelicals do. They know that this is real, and it’s their lives.

ABERNETHY: For a long time there’s been the theory that we needed a deterrent because that was the only way to prevent attack against us.

CIZIK: Well, yes, we do, but that’s not prohibitive of us virtually eliminating over time in a gradual process. We’re not for unilateral disarmament. None of us are. But we do know that the longer this goes on, the possession of these weapons without a lock-down, without reducing, the chances of a detonation in an American city go up.

ABERNETHY: Now what can nuclear weapons do about terrorism? Where does that fit together?

CIZIK: Well, frankly, we’re talking about reducing strategic weapons in this START treaty, but there’s also the lock-down of nuclear materials and the rest. That’s what has to happen, and frankly terrorists can get these weapons through nuclear materials from Russia and elsewhere, and we know it’s going to happen. The question is can we stop it?

ABERNETHY: Yeah, well, that’s my question. What is your recommendation about how to prevent that?

CIZIK: What most policy analysts in this town aren’t doing is talking about engaging with religious groups internationally—Muslim leaders where I’m going, to Morocco this week to do just that, for peace-making purposes. In other words, engaging with religious actors and communities is what’s absolutely necessary. In American foreign policy that has never been done, and it has to be to stop this from happening.

ABERNETHY: The Senate probably will be taking up the START treaty.

ABERNETHY: Can you predict how that’s going to happen?

CIZIK: Well, I can say this. If younger evangelicals, who are disproportionately conservative, yes, get engaged on this issue they’ll change those Republicans who are resistant. Now some of this opposition is simply loo-loo, you know, looney tunes, the kind of talk that “we need peace through strength.” Now look it, strength is doing this—Global Zero. That is real strength.

ABERNETHY: Richard Cizik of the New Evangelical Partnership, many thanks.